Blue has been carried by some of the most powerful Jedi in Star Wars history, including Obi-Wan Kenobi, Anakin Skywalker, and Rey Skywalker. They are far from the only ones who use blue lightsabers.

The blue of a Jedi’s lightsaber can range anywhere from a light blue, to a deep royal blue. In many cases, the shift in color can reflect on the wielder.

This article will cover the lore of blue lightsabers within the Star Wars Universe, along with who are the most famous wielders and what it means in the greater scheme of the story.

Check out this list of custom lightsaber companies so you can own your very own blue lightsaber! 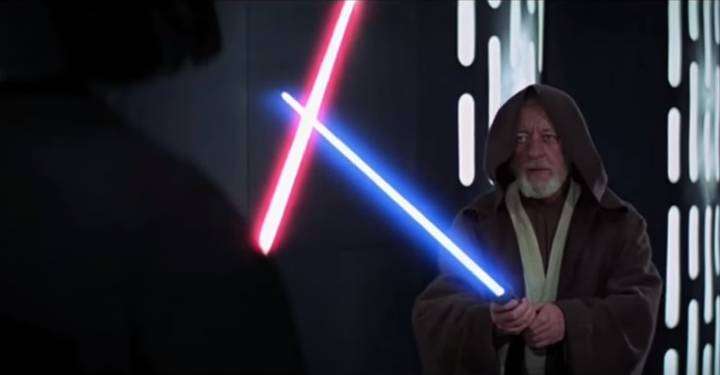 The Meaning Of Blue

In color theory, blue can mean calm, trust, and stability. When considering the vows and lifestyle of the Jedi, it’s easy to see why it’s the most common color for them.

There were several other owners in between those three. The Skywalker lightsaber was also owned by Padme Amidala, Maz Kanata, Leia Organa, and Ben Solo at different points of history.

Among Star Wars Canon there have been several variations in the type of blue that a lightsaber may be. Tera Sinube had a light blue blade, while Anakin Skywalker’s first lightsaber was a deep blue. In between those there has also been Azure, Frost, and variations of medium blue. Slightly outside the blue spectrum, there was Cyan and Indigo, but they will be covered in their own article.

Blue is most associated with the Jedi and is most often seen carried by Jedi who have completed their training. Despite that, there have been several examples of force-sensitive beings with blue lightsabers who did not complete Jedi training.

Aside from blue, the other common color for the Jedi is green. Jedi have also been known to carry purple and yellow lightsabers.

It is a part of Jedi training to retrieve the kyber crystal that will be used in that Jedi’s lightsaber. At that point in training, a youngling will be sent to the Crystal Cave somewhere on the planet of Ilum. The exact location of the cave is a closely guarded secret by the Jedi.

Kyber crystals are force sensitive and attune to their owner. They grow naturally all over the galaxy, but Ilum has the largest known veins of them.

In Star Wars legends, a common wielder of the blue lightsaber are Jedi Guardians. Jedi Guardians are Jedi who are specifically trained in the area of martial arts and combat. These Jedi help maintain order in the Star Wars universe and can further specialize into Lightsaber Instructors, Jedi Peacekeepers, Exotic Weapons Specialists, and Jedi Ace.