Curious Star Wars fans have always wondered, what powers a lightsaber? How exactly does it work? What is the history behind this great weapon and how does it fit into the lore of the Jedi and Sith orders? Luckily, the franchise has provided fans with many answers to these questions since the weapon’s debut, including the first question.

This article will examine the importance of Kyber crystals on the workings of a lightsaber and some of its special properties, including; where they’re found in the galaxy, how they’re obtained and what determines the lightsabers color.

As “an elegant weapon, for a more civilized age,” the lightsaber is undoubtably one of the most memorable and fan-pleasing weapons ever created in the history of cinema.

With its attention-capturing aesthetics of pure energy and whirl-hum sound effects, many Star Wars fans have fallen in love with the weapon at first sight since its introduction in A New Hope.

Kyber Crystals – The Heart of the Lightsaber

While customized lightsabers can vary greatly in terms of aesthetics and style – including some of the most iconic lightsabers in Star Wars, they all share certain characteristics and construction design.

From a technical standpoint, a diatium power cell acts as the primary power source in every lightsaber. Located within the bottom portion of the hilt, it provides the “spark” and energy source when the wielder ignites the blade.

However, the spiritual heart of a lightsaber is the Kyber crystal, which rests upon the primary crystal mount that is attached to the diatium power cell. These rare, Force-sensitive crystals focus the energy generated by the power cell and channels it into the pure plasma energy that is the weapon’s blade, with the aid of other built-in parts.

Due to the Kyber’s unmatched ability to magnify energy output and potential to be enhanced by the Force, it is a part of every Jedi Knight’s rite of passage to obtain one.

The Jedi then bond with it through the Force and integrate it into their personal lightsaber during construction. Through this special connection, the lightsaber becomes a part or extension of the Jedi her/himself, rather than it being a mere tool for its user.

Indeed, the Jedi have known about Kyber crystals for tens of thousands of years, forming a special relationship with them and closely guarding its secrets. The crystals are Force-sensitive and exhibit almost sentient characteristics by calling out to those who are in tuned to the Force, as well as communicate with one another.

While they are rare in the galaxy, Kyber crystals can be found on multiple planets, including Jedha, Exegol and most famously on Ilum. As was tradition since the earliest days of the Jedi order, younglings would undergo “The Gathering” inside a Jedi Temple on the latter planet. During this trial, Jedi younglings had to overcome personal fears and insecurities to reach the Crystal Caves of Ilum. If they were successful, a Kyber crystal would call out to them in the Force, leading to its discovery and eventual bond with the retriever.

In its natural state, Kyber crystals are colorless. Once they have been pair-bonded to a Force-user, however, they usually glow a green or blue hue. This is due to the crystals’ inherent alignment with the light side of the Force. Therefore, the crystal changes its structure at the molecular level to align with the personality and Force nature of its user. 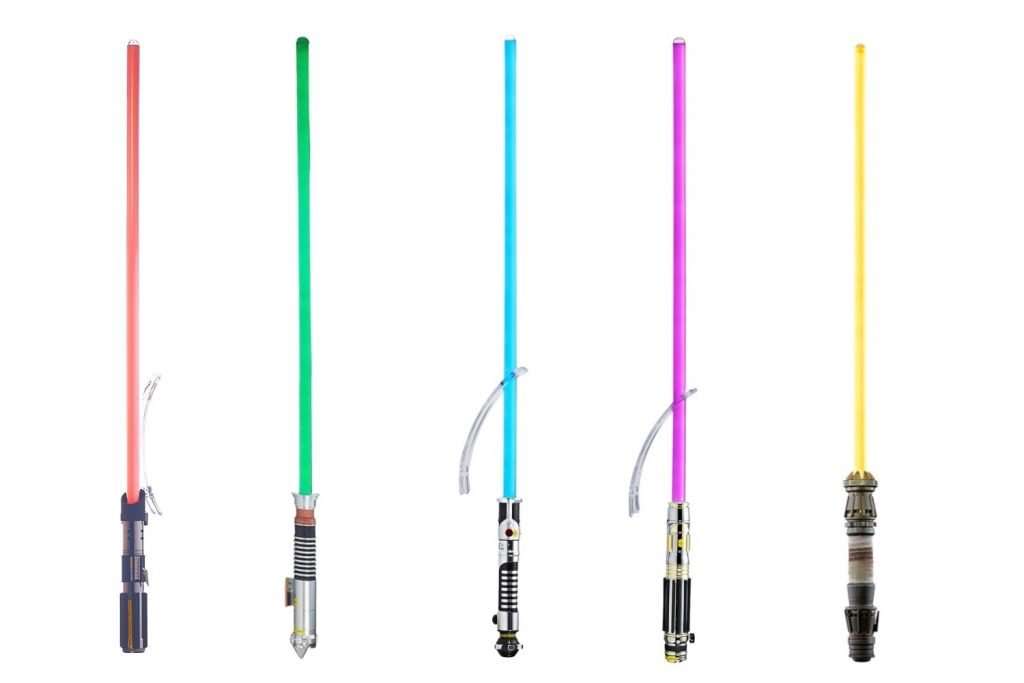 In more rare instances, the crystals can become other colors such as purple – as was the case with Jedi champion Mace Windu; or yellow, exemplified by lightsaber pikes wielded by Jedi Temple Guards.

Kyber crystals do not naturally produce the red lightsaber blades that are typically sported by the Sith and must undergo a dark side process known as “bleeding” to produce this effect.

Essentially, the Sith must kill a Jedi in order to obtain a crystal. The dark side Force user then pours hatred, anger, and pain into it. Through this ordeal, the Sith corrupts the crystal from the light side to the dark side of the Force by bending it towards his will and malice, causing it to turn a red hue.

A corrupted crystal can be “purified” of its dark side energy, resulting in a seldomly seen, white-colored lightsaber blade. An example of this occurred at the end of the Clone Wars era, when former Jedi Ahsoka Tano retrieved corrupted crystals from an Imperial Inquisitor known as the Sixth Brother.

The dual-wielding Ahsoka then used the healed crystals to power her primary lightsaber and more compact Shoto blade with their signature white blades.

Over the years, numerous brands have taken advantage of the weapon’s popularity amongst both child and adult fans to launch lightsaber toys in partnership with the Star Wars franchise.

While they vary widely in both quality of material and price, most are powered by lithium-ion batteries and produce the blade glow effect via LED lights. Mid-tier and above lightsaber toys often come with FX sound effects, with fancier models having multiple modes of sound, as well as blade lighting levels.

Some brands, such as Hasbro, JOYIN and Rubie have solid entry-level product lines to serve the more casual fanbase, for occasions such as Halloween or cosplay events.

For the hardcore fans who demand a higher level of authenticity and even durability for dueling purposes, top brands such as YDD, KYBERS and parent-brand Star Wars offer premium products with price tags in the hundreds of dollars.

These brands manufacture replicas of some of the most iconic lightsabers in the franchise, wielded by some of the most powerful Jedi and Sith of all time. Examples include the legendary Skywalker Lightsaber, Darth Vader’s red lightsaber and Kylo Ren’s cross-guard lightsaber. Regardless of your needs, level of interest and budget, there is truly something for everyone.

Lightsabers have taken an irreplaceable place within the Star Wars saga and have come to capture the imagination and hearts of fans worldwide. From the young to the young-at-heart, it is safe to say that most fans have at some point envisioned themselves as lightsaber-wielding heroes (or villains) fighting for the fate of the galaxy.

While Kyber crystals power lightsabers and connect the weapon to its Force-sensitive wielders in the galaxy far, far away, fans closer to home here on Earth will have to settle for battery-powered ones for now. Nonetheless, many high-quality and authentic custom lightsabers are available on the marketplace to satisfy the needs of Star Wars fans.

After all, it is often this allure to immerse ourselves in fantastic worlds of the sci-fi imagination that brings us back to the beloved franchise time and time again.