In the beginning, there were only two colours of lightsabers. Blue for the honourable Jedi, and on the dark side of the force, red for the Sith. Since then several other colours have been added to the Star Wars canon, including green, purple, and even black. However, the rarest lightsaber colour is white. 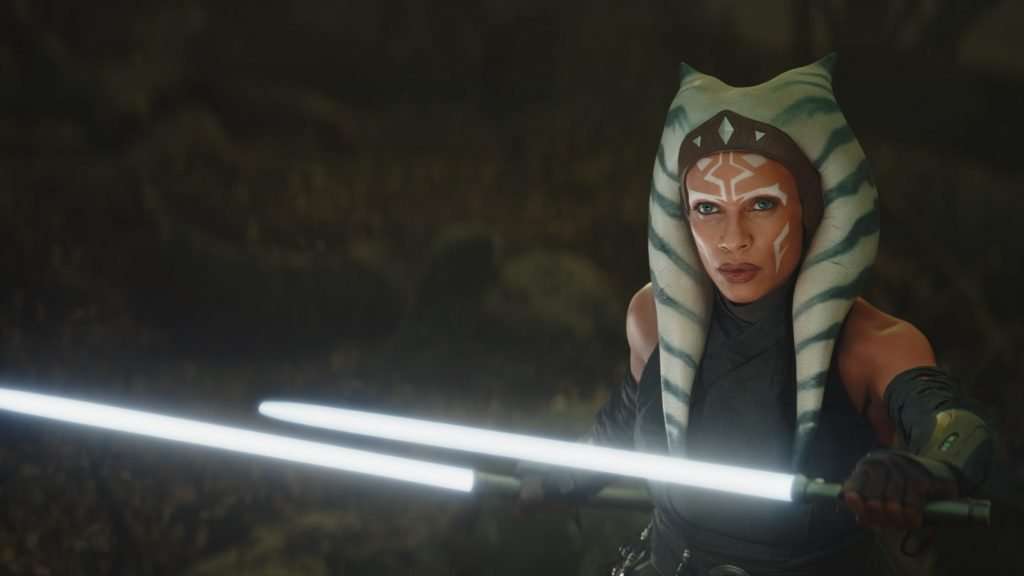 When Ahsoka was framed for a murder she did not commit, her lightsabers were taken from her and she was expelled from the Jedi Order to be put on trial. Anakin Skywalker took care of the lightsabers for her while they were in Jedi custody, and took the opportunity to improve them. Once the true murderer was found, the improved lightsabers were returned to her, but now they were blue.

At that time Ahsoka was offered the chance to return to the Jedi Order, but she chose not to. She felt that her faith in the Jedi Order was broken and that she could no longer trust them as she once did.

Ahsoka kept the blue lightsabers throughout the Clone Wars until a defeat against Darth Maul. While travelling on a ship that contained many clone troopers that Ahsoka refused to kill, Maul caused the ship to crash into a moon. While Maul, Ahsoka, and a handful of others survived, the clone troopers were all killed.

After that defeat, Ahsoka left behind her blue lightsabers which helped to fake her death. At some point later, Darth Vader, previously known as Anakin Skywalker, found his old apprentice’s lightsabers. They were heavily corroded but still worked.

It was one year after the Clone Wars that Ahsoka obtained two new Kyber crystals to make new lightsabers from. She took the crystals from the lightsaber of the Sixth Brother. The Sixth Brother, also known as Bil Valen, was an Inquisitor who hunted force-sensitive children and any Jedi who survived Order 66. The Sixth Brother had previously received a tip that a Jedi was spotted on the remote farming moon Raada.

Upon investigation, he found Ahsoka Tano. The two battled, and Ahsoka heard the Kyber crystals within his double-bladed lightsaber sing to her. Ahsoka used the force to pull the crystals from his lightsaber, causing his lightsaber to become so unstable that it exploded in his face.

These Kyber crystals, coming from a Sith blade, were originally red. Ahsoka was able to purify the crystals using the force, turning them white. Using scrap parts she had found during her travels, Ahsoka built two new custom lightsabers using the white crystals. These original white lightsabers looked very rough, but she eventually had them remade. The new lightsabers had a more functional and sleek curved design with more decorative elements.

Why Did Ahsoka Tano Use White Lightsabers

Hasbro have recently created Ahoska Tano’s lightsaber as part of the their Black Series Elite Lightsaber range. You can order one on Amazon right now!

As part of the official Star Wars canon, Ahsoka is the only character to wield the white lightsaber. However, if you look into Star Wars Legends, there are a few more. Namely, the Imperial Knights all use white lightsabers. They are a group of force-users who are loyal to the Empire and the Empire-in-exile.

In Star Wars video games, Star Wars: The Old Republic has a playable white lightsaber with a black core blade. 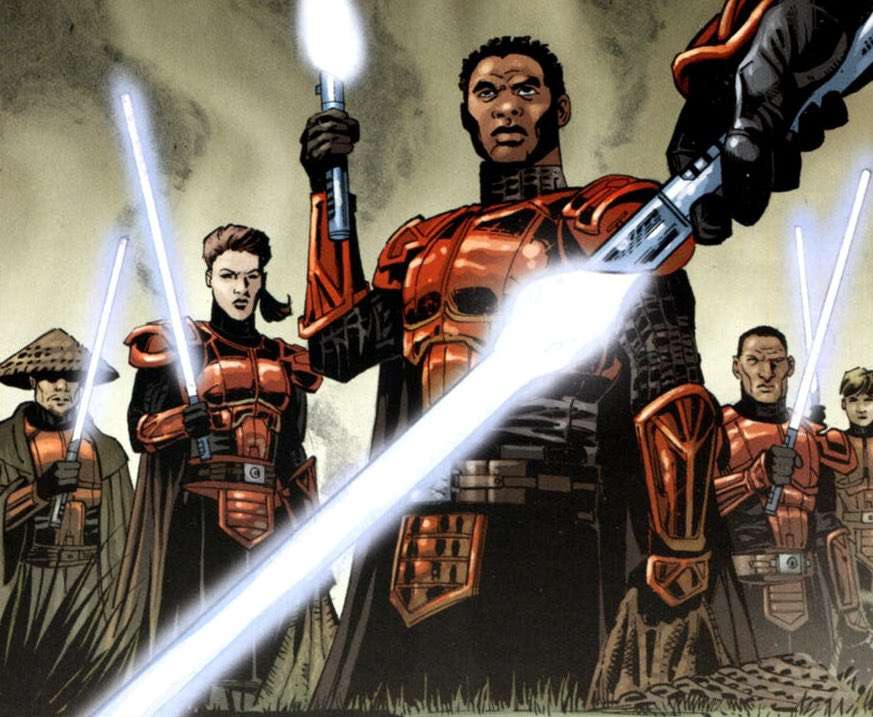 The Origin of Lightsaber Colours

When Star Wars was first being created, all lightsabers were going to be white. There is surviving early Ralph McQuarrie concept art that shows battles between the Sith and Jedi with all white sabers. Ultimately, the creator of Star Wars, George Lucas, decided to use blue for the Jedi, and red for the Sith. 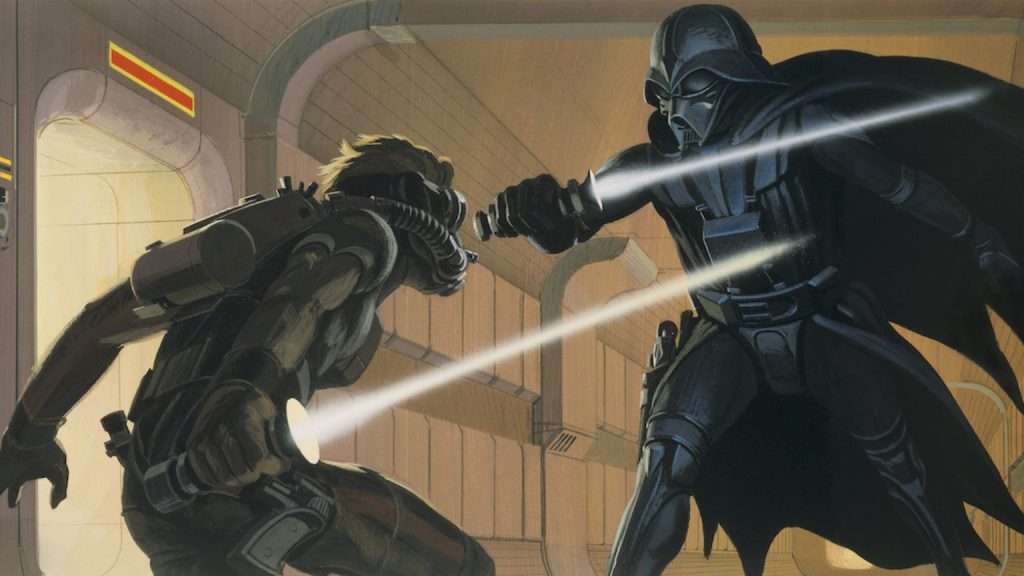 When a lightsaber is made, the force-user would imbue the Kyber crystal with the force, which creates the color. Jedi will meditate with their Kyber crystal for several days before they place it inside the lightsaber. This will create a mutual link between them and their lightsaber. While the original Jedi colour was blue, several others have since become canon.

Sith however have a different approach. Due to their connection with the dark side of the force, they are unable to create that mutual connection with their Kyber crystals. Instead they pour their feelings of hate, rage, and pain into the crystal which “bleeds” it and causes the red colour. It is because of the bleeding process that no Sith lightsaber can be any other colour but red. (In Legends there is the possibility of Sith with orange or magenta lightsabers as well.)

In the case of Ahsoka, the white lightsaber came to represent her neutrality and not a member of the Sith or the Jedi, but while still having the force mastery necessary to create and wield a lightsaber.

The location of where to find Kyber crystals was a closely guarded Jedi secret for years. The most common place to find them are in the Crystal Cave on the snow planet of Ilum. However there are many other places across the galaxy where they occur naturally.

Where We See The White Lightsaber

The white lightsaber has also appeared in:

What do you think of the white lightsaber? We think it’s the perfect representation of Ahsoka’s journey as a character between the light and dark sides of the force. Do you think we’ll see any more characters join in the canon lore who are able to use one? Leave your opinions in the comments!

3 thoughts on “The History of White Lightsabers”