See below for the full list of Black Series Force FX Lightsabers produced by Hasbro.

On the final Mando Monday, Hasbro revealed their brand new Mandalorian Darksaber which featured in the Disney Plus streaming show The Mandalorian. This amazing replica features its own very cool stand allowing you to display just the hilt. When the replica blade is attached the Darksaber comes to life with realistic sounds including power-up, power-down, and motion sensor-controlled idle hum and battle clash effects. Also, this Lightsaber features molten tip effect, light-up hilt, progressive ignition and the first-ever STAR WARS FORCE FX ELITE LIGHTSABER white LED blade edge. A very unique item which would grace any collection.

Ahsoka Tano was the Padawan of Anakin Skywalker, and later she plays an important part in Star Wars Rebels. Before that, she wielded this lightsaber as her primary weapon. Her first lightsaber has a green blade, but this replica is the first in the Black Series Force FX Elite line to be able to cycle between blue, green, and yellow blades. The metal hilt is a sure sign of quality too. You can even remove the blade when storing it on a display stand. As many Star Wars fans know, Kyber crystals are the heart of the lightsaber, and this replica has a removable one you can also display.

If you love Emperor Palpatine’s sinister laugh, then you can complete the look with his iconic lightsaber. Palpatine wielded his lightsaber with deadly skill and accuracy, as seen in Episode III’s iconic duels. The red blade lets out the perfect shade to appear just like ancient Sith Lords did, evil and frightening. The metal hilt is based on the exact design used in the movies and other Star Wars media and is very realistic. When placing it on the included display stand, you can opt to remove the blade. The sounds are very much like those in the movies and animated series, so you can be confident in the audio quality.

Darth Revan is part of the Old Republic storyline, and many fans love his story which sees him switch between hero and villain. His lightsaber has seen colour changes from purple to red, and the hilt is a very old design. This replica holds both features, allowing you to change blade colour. The metal hilt is a perfect copy as well. When displaying in the included stand, you can remove both the blade and the Kyber crystal within. The sounds are reported to be satisfactory to dedicated fans, and its blaster deflection and wall-cutting effects are very realistic. One thing is that the crystal and blade cannot be in the Saber together.

Fans of Asajj Ventress can rejoice by getting one of these lightsabers (unfortunately not sold in pairs). The curved hilt is reminiscent of Count Dooku’s Makashi style, and being his apprentice Ventress knows Makashi too. This Black Series Force FX replica lightsaber does have a comfortable metal hilt, but the colour is a bit strange, blue instead of black. The sounds are just like the others, clear and crisp. It detects motion very well too. The blade is a bit brighter than the usual red lightsabers but this is not a concern.

The master of Shii-Cho, or Form II, Kit Fisto wielded this green lightsaber for his whole career as a Jedi. The amphibian Jedi’s lightsaber even worked underwater, something not all lightsabers could do. This replica has an excellent metal hilt, and the black rubber rings are not painted on, but actually rings attached to the hilt. The green blade is quite bright, though it is notable that green is a bright colour in general. The sounds are very good too. Many fans believed that it was a great release during the early 2010s.

Ventress’ master Count Dooku was of noble birth, and as such chose the curved hilt for his lightsaber to complement his Form II style. The count was one of the best duellists across the galaxy and deadly to all opponents. This replica perfectly mimics the form of the real thing, and its sounds are impressive. As with all Force FX sabers, you can mount it on the included stand. The only bad points are that it requires a bit more setting up and is a bit heavier than other lightsabers, but these faults are minor.

Kylo Ren’s cross-guard lightsaber caught much attention when it first appeared in trailers. Of course, this meant that the day this replica lightsaber was released, many fans clamoured to get one. Hasbro did not hold back and packed it with many features standard of the Force FX series, such as the metal hilt, sound effects, and more. The removable blade also allowed fans to mount it on the included display stand. When dragging it through a surface, the molten glow is also mimicked, just like in the movies. The Saber is pricier than most others in the series, but the quality is impressive.

Without the need for an introduction, Mace Windu’s purple lightsaber was a truly iconic weapon. Many fans loved the special purple blade in a world of blues and greens. This replica has been touted to have a comfortable grip which is easy to spin. The blade is purple but has two red defuser lines. However, these are hard to detect from farther away. It truly embodies the ‘white core’ effect of lightsabers. The sound is rather expressive, and the lightsaber does not repeat sounds. It is a bit louder than most people expected, but this does not affect realism or functionality at all.

This replica lightsaber was modelled after Obi Wan’s personal weapon in Star Wars Episode 1: The Phantom Menace. It was the first lightsaber first showed canonically that belonged to the then Jedi Knight. This replica has a metal hilt, included stand, and plays realistic sounds as the others do. It is a bit lighter when compared to a few other sabers, though it is quite tough. The grip is rather comfortable to hold. Some owners reported poor sound quality and dead LEDs, though they seem to be in the minority. Regardless, this replica is a great product to collect.

If you want a double-bladed lightsaber, then you’re in luck. You can get this replica modelled after Darth Maul’s iconic weapon. Its hilt is longer than the other lightsabers so keep that in mind. The weight of the lightsaber is more towards the blade, which might take some getting used to. Regardless, it is a fun replica to swing around in a wide space. The metal hilt is very detailed and completely resembles the real thing. The blade when lit is a bright crimson and its shade is intimidating, especially in total darkness. The sounds are reused from older Sabers.

This is not a lightsaber by any means, but it is still part of the Force FX series. This baton was used by a First Order Stormtrooper to fight Finn, who used to be one of them himself. It was able to withstand lightsaber blows, as Finn proved. This replica is made to resemble the original prop. It also has sounds from The Last Jedi and the prongs at the end are self-releasing. The handle has both metal and plastic but is very sturdy. A vibrating motor also adds to the experience immensely. 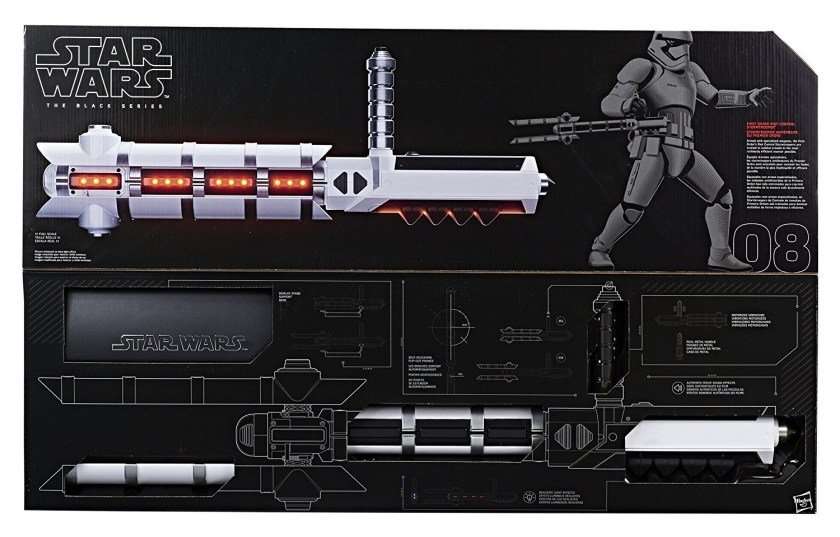 Used by Rey during her formal Jedi training, this weapon was her trusted ally. As for this replica, it has all the standard features like metal hilt, sounds, effects, and the included display stand. The grips are made of a sort of polymer, giving them soft and comfortable qualities. Unfortunately, there are removable stickers on the hilt, which is off-putting for some fans. Hasbro markets this lightsaber for light duelling and display, so it is not advised to do any heavy duelling with one. Being too rough will damage the LEDs in the blade and create dark spots.

The way this replica lightsaber lights up is completely like the movies, a creeping motion upwards as the blade springs to life. Wielded by Kylo Ren, it has all the elements of the dark side in it. Bear in mind that this replica is not the same as the Elite version. The metal hilt has exposed circuitry and a wire, showing how crude and simple it is despite its destructive power. Its hilt is heavy and the sounds are sinister and crackling, just like in the movies. As the Elite version has more features, you can expect this one to be somewhat inferior, but rest assured that the quality is also no less than the former.

In Episode VI, Luke started wielding a green lightsaber, and this replica is based on that particular weapon. It resembles the original prop used in filming and is made of high-quality materials. The metal hilt is very detailed and the sounds and effects are convincing. Unlike some lightsabers we talked about, this one is lighter comparatively, so small children can expect to hold this easier. With a well-balanced hilt, wielding it is easy and comfortable. One drawback is that the switch is a bit too fragile. Regardless, this is a solid addition to your collection and great for cosplay.

The former Jedi Master Anakin Skywalker became a Sith Lord, Darth Vader, after falling to the Dark Side. He wielded this lightsaber from then on, sporting a bright red blade. This replica lightsaber is a high-quality copy of the original and is well-praised. The hilt is nice to hold and has all the details. However, it is thicker and awkward to spin. The electronics are well-made and the sounds are decent, though this replica was plagued with one problem many red Sabers had. That was the dimness of the red LEDs. While not the best, you can still consider getting one if you have a lower budget.

Master Yoda wielded this small lightsaber and fought valiantly with it, though he much preferred using the Force. This replica is a perfect reproduction as it is seen in all Star Wars media. It’s shorter but is rather bright. The basic sounds leave something to be desired but are decent. It’s not recommended to be used for duelling at all, given its petite construction. However, even with its flaws, you can enjoy a well-made realistic lightsaber.

While a dated release in 2020, this lightsaber is still a good choice to own and collect. Its hilt still holds up to be very comfortable to hold and spin, and the blade is quite bright when compared to many others. The sound quality is excellent, though the sounds are not very distinct. Nevertheless, this lightsaber is still worth spending some money to collect. The details are excellent for the time and even today are quite good. If you’re considering cosplaying as Ben Obi-Wan Kenobi as he appears in Star Wars Episode IV: A New Hope, this is what you need.

Originally, Luke Skywalker wielded this blue-bladed lightsaber before losing a hand and then crafting his new green one. Many impressive moments involved this venerable weapon too. This older weapon is still an iconic collector’s choice, as Hasbro released this for retail. Its sounds, hilt, and effects are all standard. What sets this apart is its perfect balance and the accurate blue colour in the blade. If you love a well-balanced blade, this is a great choice for you. After all, being able to cosplay Luke of that era is in the mind of many fans.

Each one of these replica lightsabers from Hasbro’s Force FX series is a great collector’s item. Built with great quality and detail, and accuracy to the source material. We hope you enjoyed this article and that it will help you channel your inner Jedi…or Sith!