The Star Wars franchise features a variety of iconic helmets that span every corner of the galaxy. In 2020 a collection of LEGO Star Wars Helmets were released with great appreciation. These particular Star Wars LEGO helmets have been created with adult LEGO fans in mind and have been crafted with intricate detail. The finished build size is compact and won’t take up too much room no matter where you decide to display them, from your office to your home. Each helmet is accompanied with a stand and nameplate. 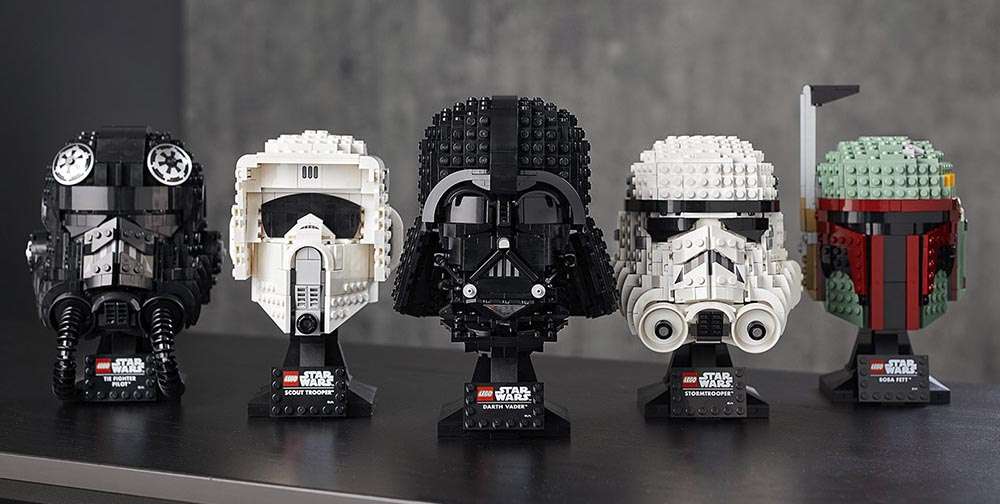 Below is a list of all of the helmets and busts released by LEGO so far. Most of these can be ordered from Entertainment Earth using our affiliate link. Alternatively you can check the prices using the Amazon buttons.

This is the first helmet in the collection not to be based on a trooper or character that wears a mask. Luke Skywalker’s helmet has an open front with translucent orange goggles. LEGO have done a great job recreating this iconic helmet which includes the Red Five markings and chin strap. An ingenious design and one that will look superb on display. As always this helmet comes with a buildable stand and name plate. 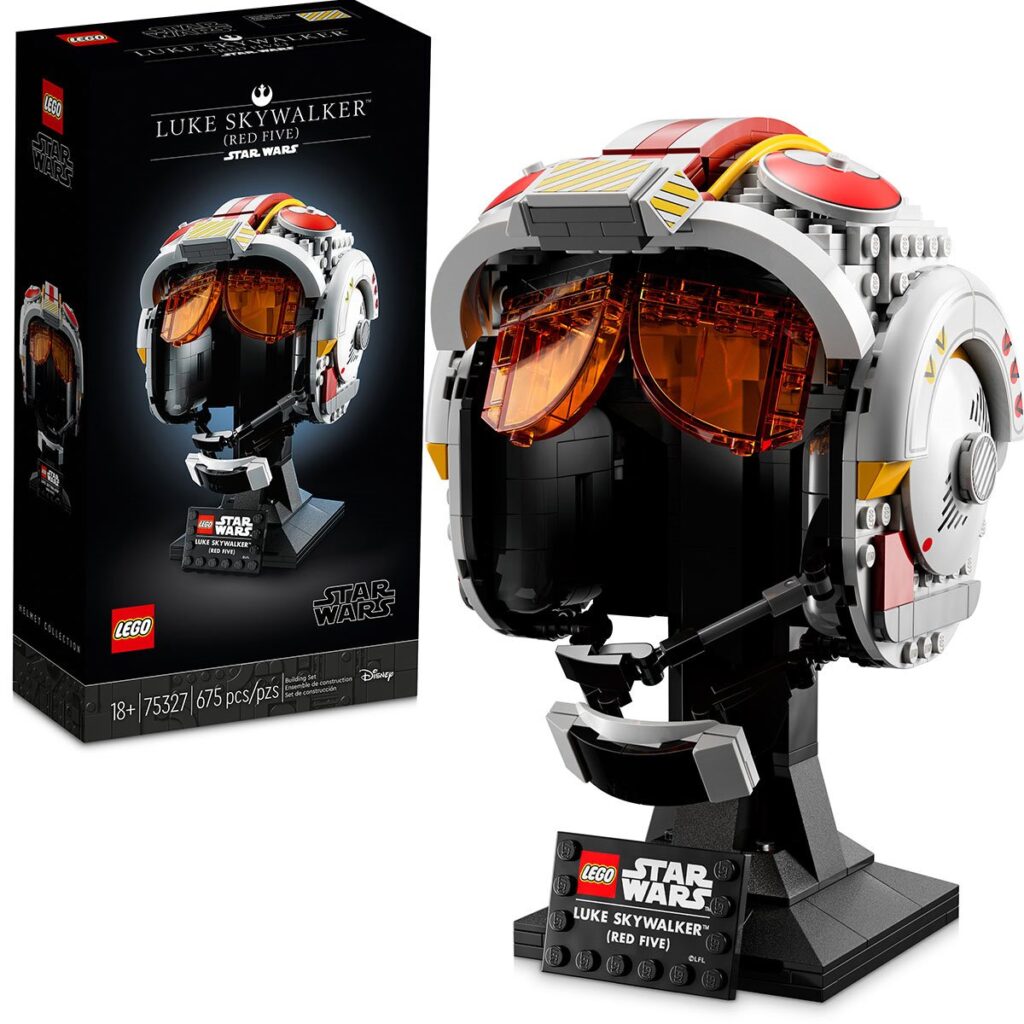 In was only a matter of time before LEGO made a buildable helmet based on the iconic Mandalorian (Din Djarin). The use of grey and shiny silver pieces recreates the metallic Beskar material perfectly. The contours of the helmet are great and the centre black visor is in perfect scale with the size of the helmet. Once again the set includes a buildable stand name plate. 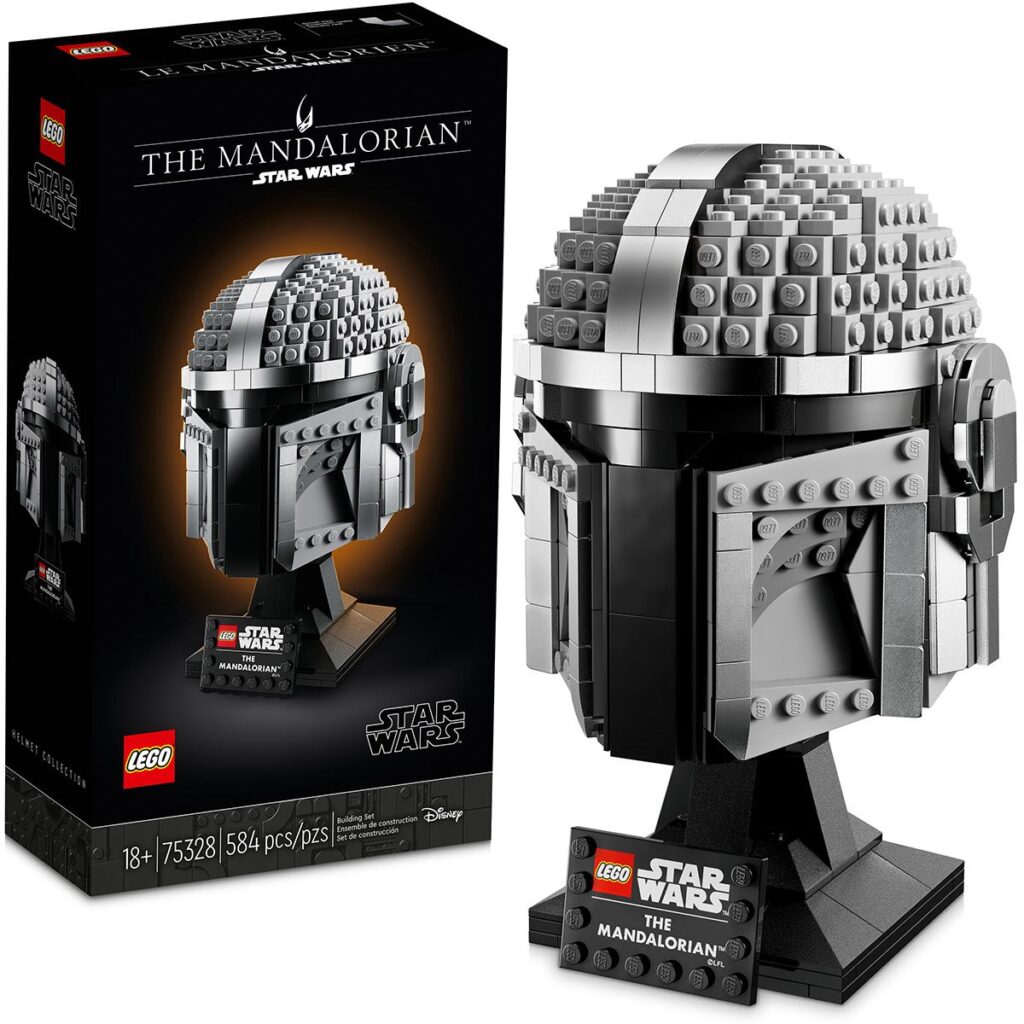 As seen in Star Wars: The Mandalorian Season 2. The Dark Trooper was a welcome sight for many fans. The Dark Trooper are more droids than troopers and are therefore a lot stronger and can fly with their rocket propelled feet. This LEGO Dark Trooper helmet recreates the look really well and includes the famous evil red eyes, constructed using translucent red LEGO elements. The slight forward tilt of the helmet on its brick-built stand deliver an authentic menacing look. 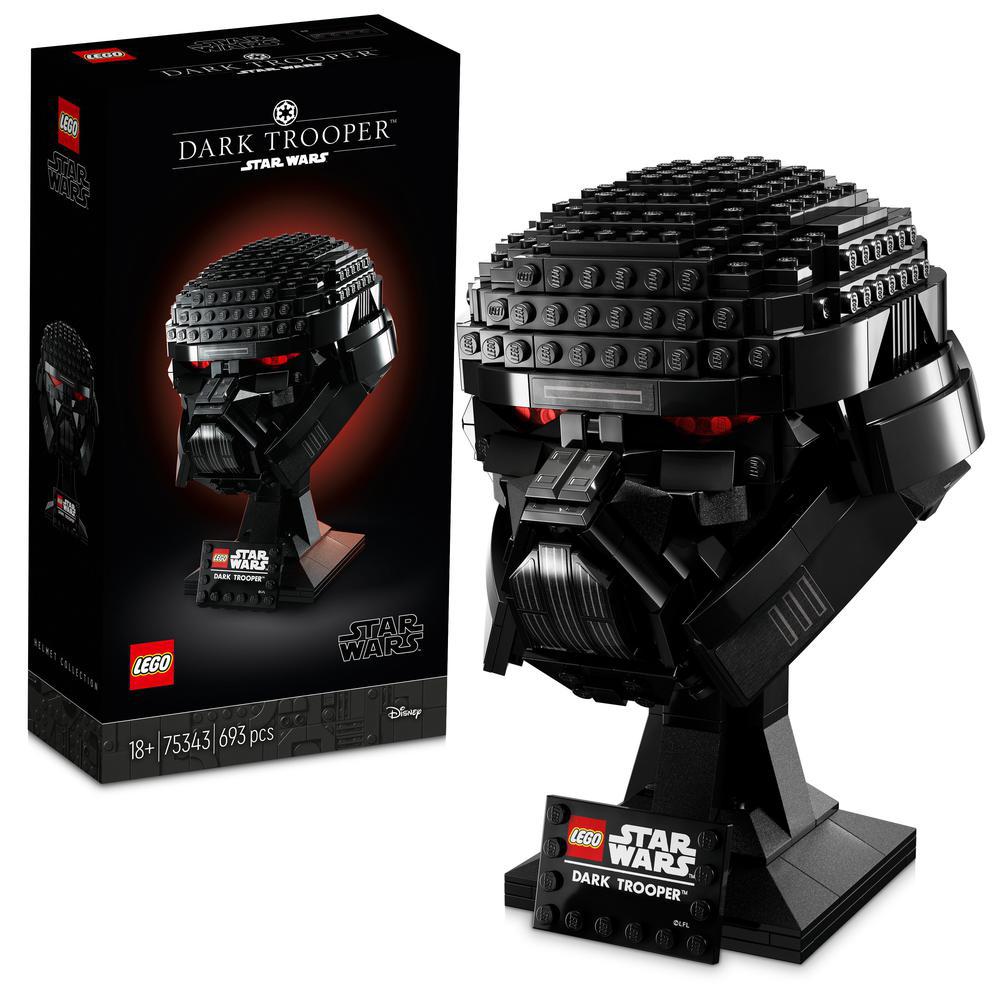 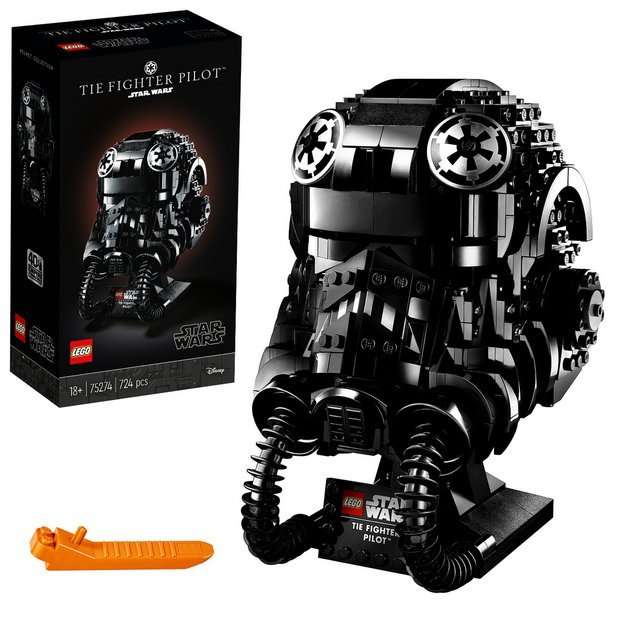 Bring back memories of intergalactic starship battles with this iconic TIE Fighter Pilot Helmet. The TIE pilots were known for their all-black flight uniform and fully enclosed vacuum-sealed helmets. As the TIE fighters were not equipped with life support systems, the bulky helmet had breathing tubes to provide the pilot with oxygen within the vacuum of the cockpit.

This set was designed to follow the exact curves of the TIE pilot helmet. The insignia of the Imperial Navy, found at the temples of the helmet, are striking against the all-black contours of the helmet.

Despite being all black, the shift in textures and block type clearly outlines every part of the face, from the eyes to the mouth covering. The shape of the helmet itself is reminiscent of the Stormtrooper helmet, with the addition of the breathing tubes that curve downwards from the jaw.

The nameplate for this model is nestled between the ends of the breathing tubes as if the helmet is just waiting to be connected to a life support chest plate and worn into battle. 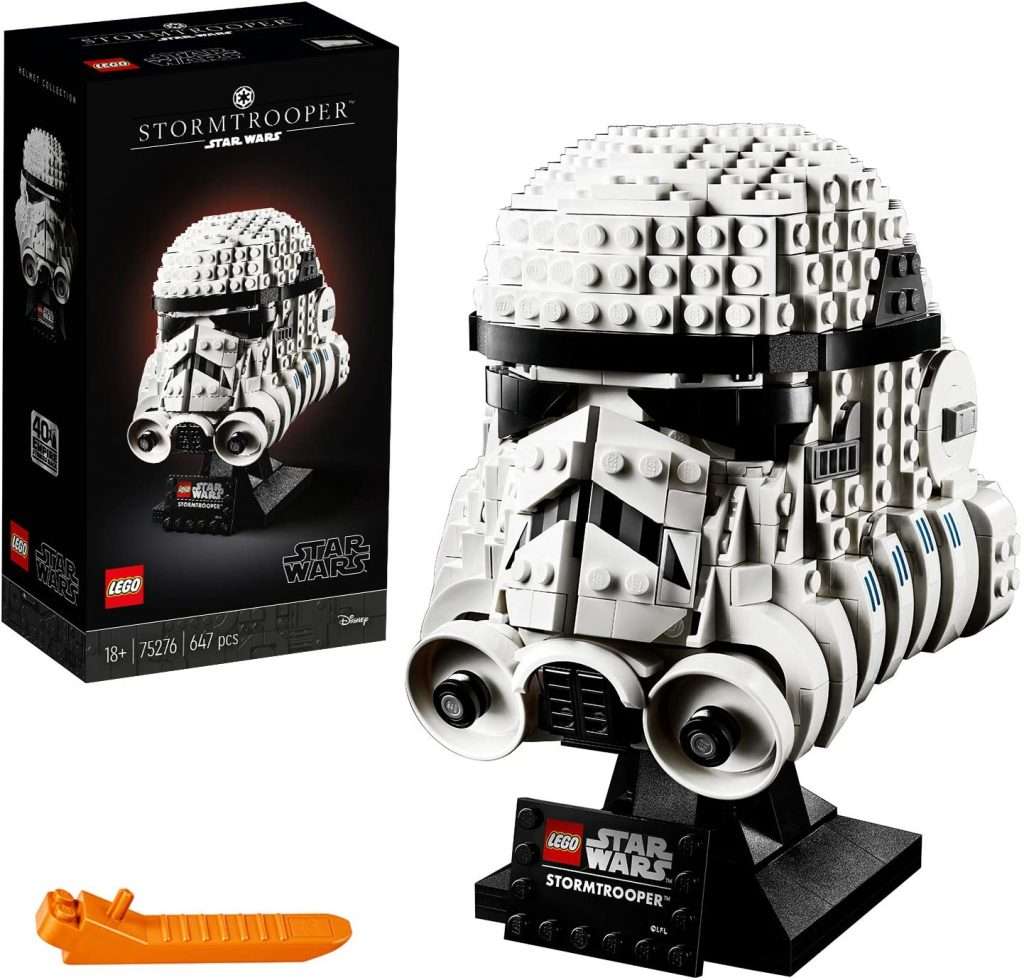 As the face of the Imperial Army, the Stormtroopers were considered to be the elite frontline infantry troops. The Stormtroopers have served the Galactic Empire with unfaltering loyalty since their inception at the end of the Clone Wars.

The Stormtroopers were known for their all-white armour and helmet. The helmet itself protected the head while providing filtered air, communications, enhanced vision, and a heads-up display.

This LEGO kit uses the classic brick texture for the helmet while the design still carries the iconic Stormtrooper shape. The black band across the forehead along with the smooth bricks used for eyes and mouth create the battle-ready expression of the Imperial Army.

The smaller silver and blue details of the helmet bring the whole helmet together into a cohesive and masterful display. 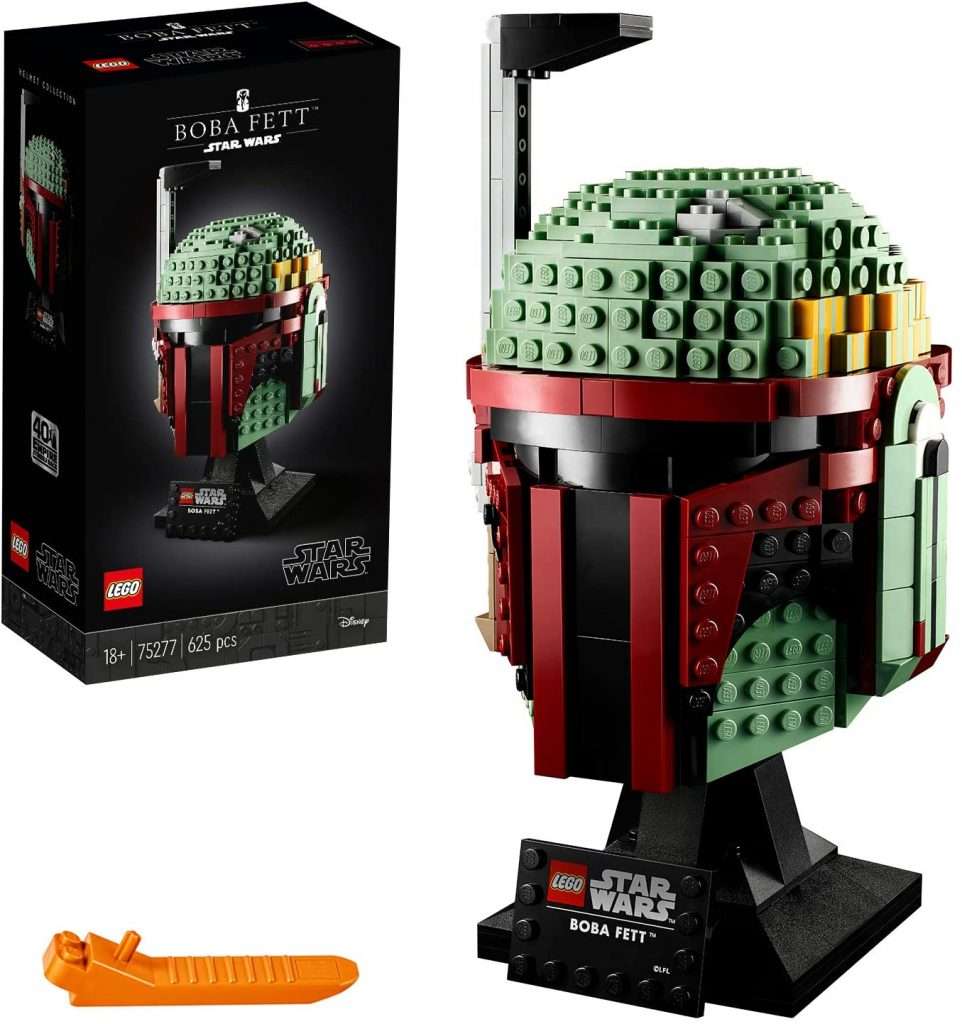 Boba Fett was the clone and son of famed bounty hunter, the Mandalorian foundling, Jango Fett. Following in his father’s footsteps, Boba Felt grew up to be a legendary bounty hunter himself, wearing the same Mandalorian armour that he inherited from his father. Boba however customized this armour, painting it the familiar green and silver.

This LEGO display model is undeniably Boba Fett. The T-shaped front for the eyes followed the distinctive Mandalorian pattern and outlined in blood red. The body of the helmet is a shade lighter than normal, going from a tattered dark olive to a lighter almost mint-like green.

The interesting feature in the green sections of the helmet is the couple of grey bricks to simulate the chipped and fading paint. There are also yellow bricks on the upper left side of the helmet to simulate Boba’s yellow stripes.

In this particular model, the targeting rangefinder antenna is able to swing forward over the eyes.

Fans of Boba Fett will know he has recently appeared in the hit Disney+ TV show The Mandalorian. The famous bounty hunter will also star in his own show The Book of Boba Fett. There is no doubt we will see new LEGO Star Wars sets based on the new show. If you can’t wait, then check out all of the LEGO sets from The Mandalorian instead! 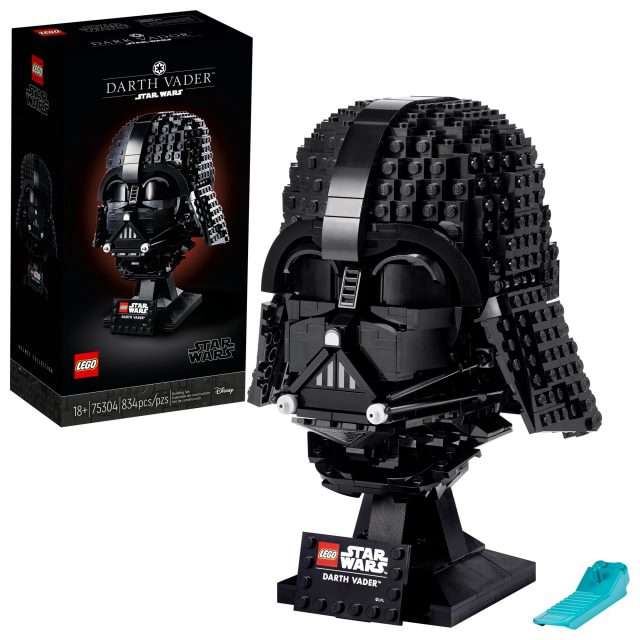 There is no other helmet in the entire Star Wars universe that is quite as iconic as Darth Vader’s. After his near-fatal duel with Obi-Wan Kenobi, the helmet became a crucial part of Darth Vader’s mobile life support system. The flared outer shell provided protection to the myriad of systems beneath.

The front mask contained sensors to monitor his vitals, while the mouthpiece acted both as an air intake, and where the enunciator produced the bone-chilling voice. Originally the helmet was designed with the shape of a skull in mind to make him appear even more menacing.

This LEGO set makes the best use of the LEGO brick texture to highlight the divide between the outer shell of the helmet and the front mask. The shell uses the LEGO bumps in conjunction with smooth lines and the flared sides to capture Darth’s Vader’s silhouette.

The front mask captures the small details of the helmet to perfection, from the rounded eyes to the triangle mouth. There is a ladder-shaped bridge of the nose and small black tubes on the sides of the jaw for the transmitters.

Despite most of the helmets stopping at just the helmet, Darth Vader’s seems to include his collar. 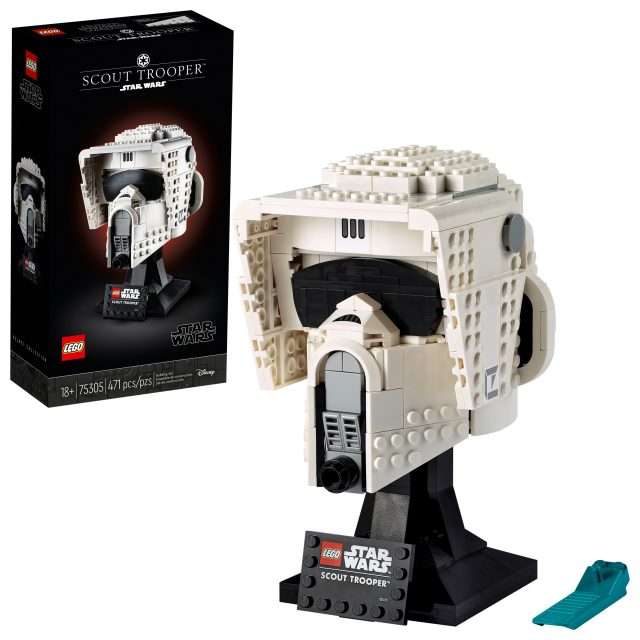 The Scout Troopers were specially trained Stormtroopers who were able to carry out reconnaissance missions. They were also known for driving speeder bikes. Their armour is lighter than the Stormtroopers, though there are design similarities between the two.

The shape of the Scout Trooper helmet is more squared off than the Stormtrooper helmet, with a visor over the eyes. The eye area is larger for more visibility, while the mouthpiece is more narrow. The mouth shape is almost akin to the Mandalorian style helmet. The Scout Trooper helmets are also able to fold up to reveal the face if needed.

This LEGO model makes the most of a simple helmet design with the use of shape and details to bring it to life. The contours follow the Scout Trooper helmet shape, while the use of LEGO blocks makes the angels slightly sharper. The combination of pieces on the mouthpiece creates intricate physical details. 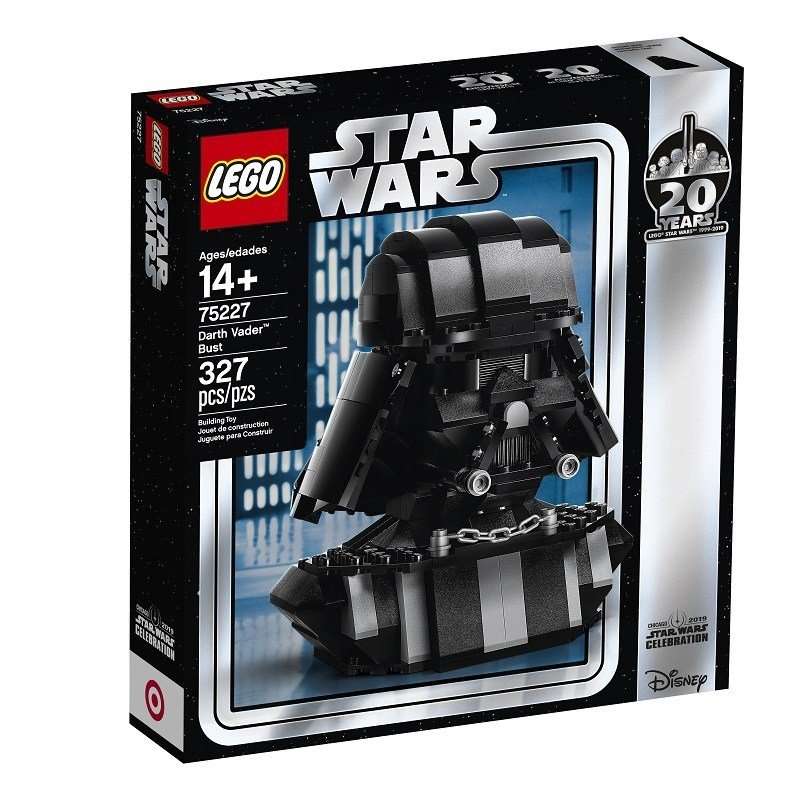 This bust is thought to be the precursor or a catalyst to the helmet collection. It did not have as wide a release as the helmets, instead being exclusive to Target and the Star Wars Celebration Chicago convention. The bust was designed for a slightly younger audience than the helmets coming in at a recommended age of 14+ rather than 18+.

The bust comes in at half the number of bricks as the Darth Vader helmet and it shows with the more simplistic design of the model. That being said, it still captures the silhouette of Darth Vader and some of the more important details.

This model opted to use smooth bricks for the outer helmet. For the face details, the designer made the best of limited blocks by using negative space and contour to highlight the main features of the face rather than capturing every detail.

Like the helmet, the bust curves down to include the collar. It is more obscure with the inclusion of a chain at the front of the bust near the neck. Below the chain, smooth bricks are used to create the beginning of the grey and black stripes of the upper chest piece of his armour. 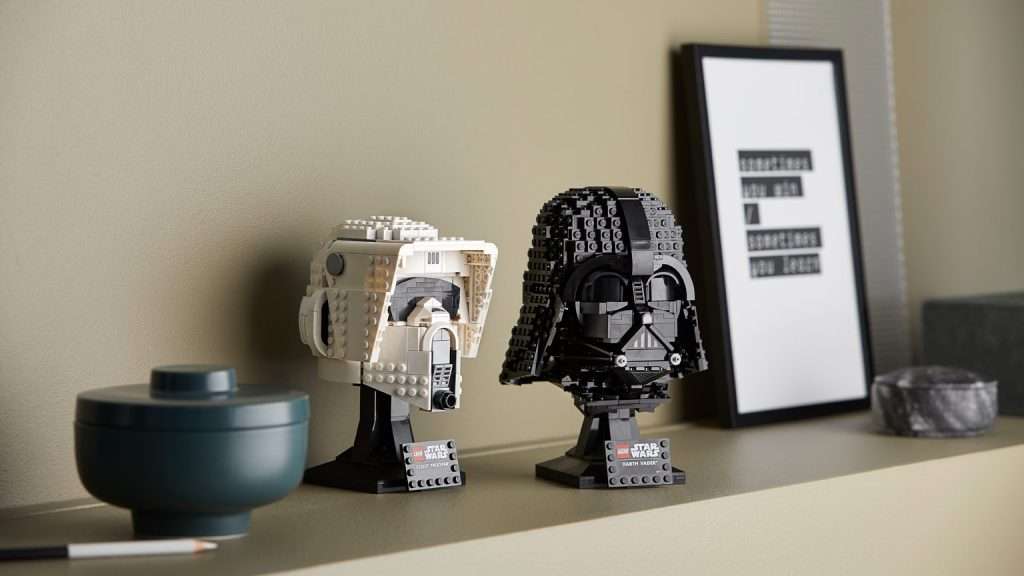 What do you think of the LEGO Star Wars Helmet collection? A lineup of all of them would be a sight to behold on any shelf. Let us know what you think in the comments below!