The Mos Eisley Cantina is instantly recognisable to every Star Wars fan. This is the cantina featured in Star Wars: A New Hope and is where Han Solo shot Greed( we won’t be discussing who shot first). Today, we will be taking a look at all of the LEGO Star Wars Mos Eisley Cantina sets released, starting from the very first which was available all the back in 2004.

This is the oldest released set for the Mos Eisley Cantina, released in 2004. It’s among the simplest and many of the features have been discontinued for newer designs. The set includes minifigures of Luke Skywalker, Obi-Wan Kenobi, Han Solo, Greedo, and a Sandtrooper. The cantina itself, Luke’s X-34 Landspeeder, and a Dewback are also in the set.

Many of the colours of the minifigures and other bricks are discontinued. For example, Luke’s minifigure in this set has yellow skin and different hair colour. Greedo is also very detailed, being one of the first minifigures to get arm printing. The stripes on his torso are very authentic but have been discontinued ever since. His colour is closer to sky blue which has since been swapped for a new greener colour.

The cantina itself has very little detail, barely resembling the iconic structure. The Landspeeder does have a unique colour scheme but is quite basic as well. If you like collecting older sets and comparing what changed between the years, this set is perfect for you. 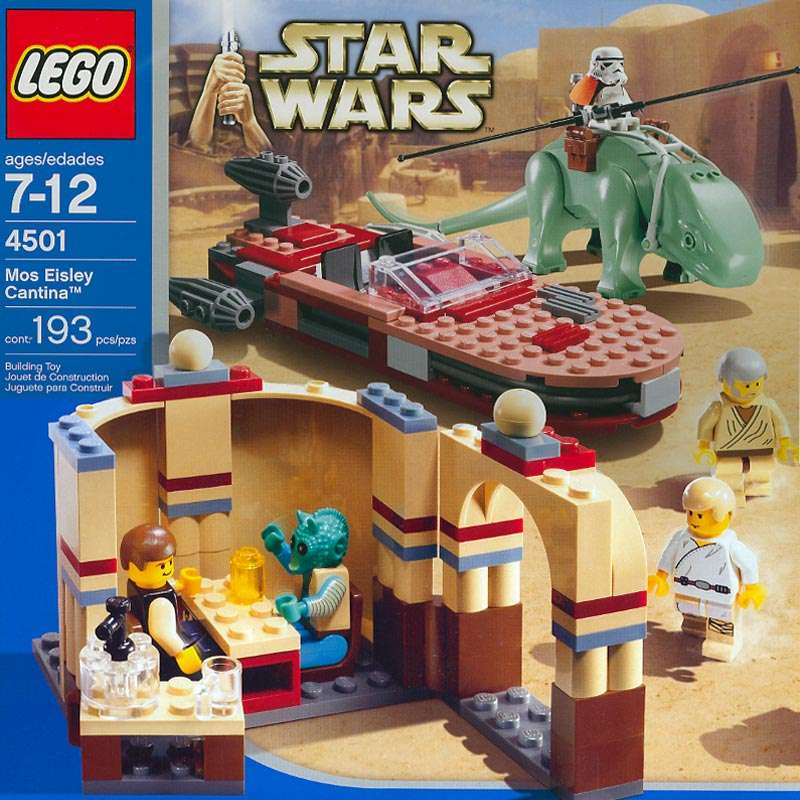 This Mos Eisley Cantina set came out in 2014, a full decade after the previous version. The cantina itself is larger and has more details. It also has more minifigures. Overall, it is a complete upgrade from the 4501 set.

In addition to the same minifigures with updated designs, there are 3 Bith musicians. The newer designs are closer to what LEGO produces today, with darker colours and shades. Greedo is now green, for example. Sadly, Han Solo lost his smirk in the first version, and this time he has a serious look. They also come with accurate accessories like blasters and the Bith musicians have their instruments. Now everyone can carry something just like the action scenes in the movie.

The most important update is the cantina itself. After 10 long years, it has received a complete overhaul in design. It is larger and all the minifigures can fit inside just like how it was in the movie. It’s very large and there is enough space to make it look just like the original. The Dewback the Sandtrooper rides also has a new and improved design. The colours and features of the beast are very detailed and match the movie. Compared to the old version a decade ago, this one is much more accurate.

Overall, this set is a huge improvement over the first Mos Eisley Cantina set, and it’s worth getting due to the amount of detail it has. 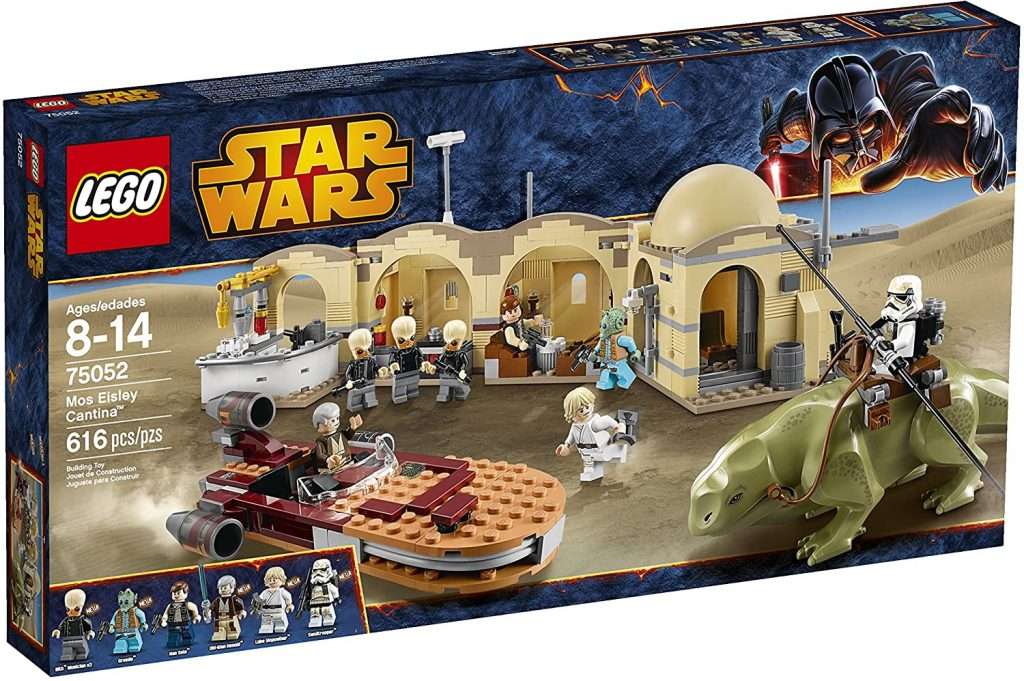 Released 4 years after the previous set, this one comes with a smaller Cantina, but there are some new minifigure designs. The set comes with an Ubrikkian 9000 speeder, which is this first time it appears in any LEGO set. This set focuses on Han Solo and Greedo’s duel, as Obi-Wan and Luke are absent.

The bartender, Wuher, is also present as a minifigure for the first time in the Mos Eisley Cantina sets. His design is very detailed, as are the other minifigures. Han Solo has a new hairpiece from 2016, and the Sandtrooper has sand on his armour as well. Greedo’s minifigure looks considerably enhanced, particularly in the shading and detail he now has.

The Ubrikkian 900 speeder’s first appearance alone makes this set worth collecting. While the design isn’t the most authentic to the original, it does look very interesting. Some of the colours could be changed.

The Cantina’s design is smaller, but there is still enough detail to recognise it. LEGO seems to succeed in showing more with less, especially when this Cantina and the 2004 version are close in size. This version has much more detail in comparison. The bar has glasses and beverage dispensers. Just like in the movie, you can clip Wuher’s blaster and hide it, an authentic touch.

For its obscure Wuher minifigure and the speeder, it’s tempting for avid collectors to get one. 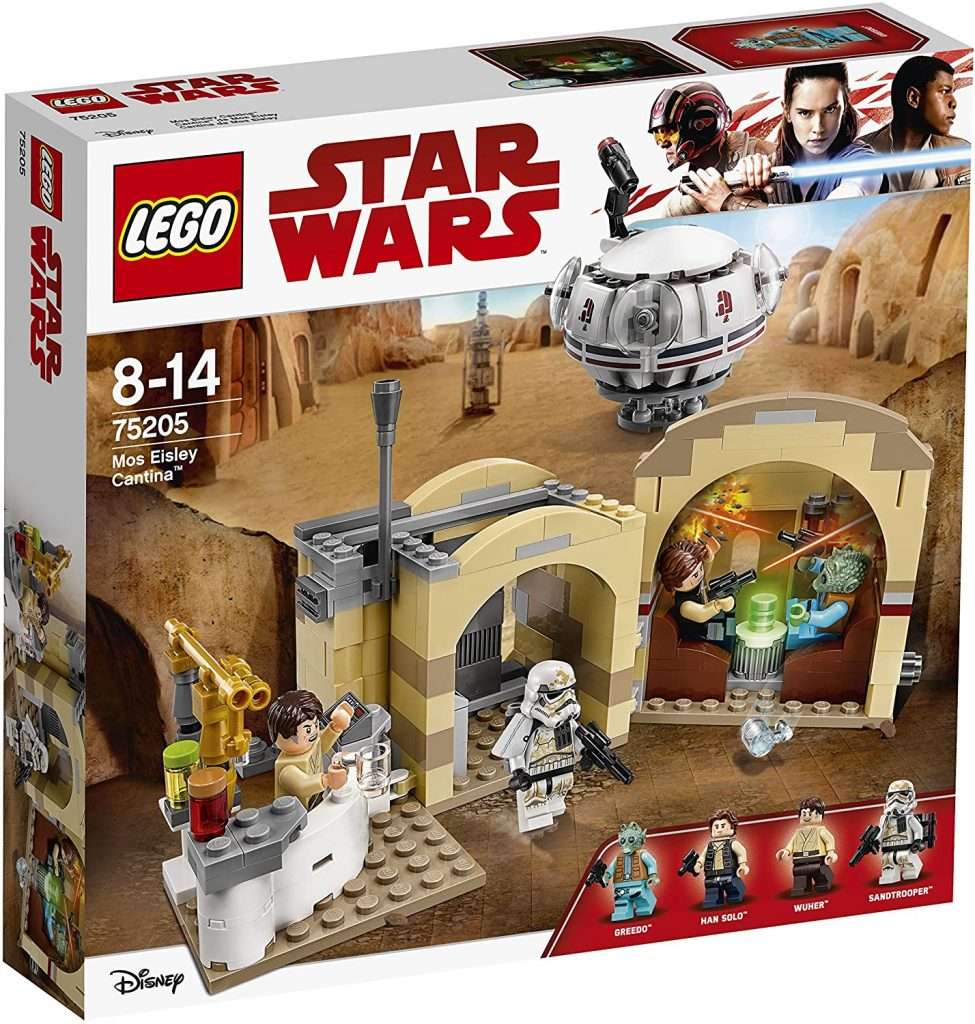 This is the pinnacle of the Mos Eisley Cantina sets and worthy of the Master Builder Series logo. Released in 2020, this huge set has many exclusive minifigures, extreme detail in the Cantina, and even a new Landspeeder. It may be more expensive, but the amount of detail and the exclusive minifigures make it very worth the price for serious collectors.

There are 21 minifigures in this set, and for some of them, it’s their first appearance in any LEGO set. Dr. Evazan, Ponda Baba, Garindan, the Saurin, and Kardue’Sai’Malloc are brand new minifigures. Some of the other minifigures have appeared in previous Mos Eisley Cantina sets or elsewhere, but now they make an appearance here. Wuher returns to man the bar in particular. Interestingly, while there are two Sandtroopers, both of them have different designs and markings. Chewbacca finally joins the party after 16 years of absence, armed with a bowcaster that shoots studs.

A small downside to some of the minifigures is that they aren’t new, but found in older sets. However, this isn’t too big of a problem seeing that LEGO gave each of them a lot of details.

The Cantina itself is very detailed down to the bricks and studs, and everyone can be where they were in the movie. The bar is now displayed in its full glory instead of having only a small part of it. There are gold and silver pieces used in its construction.

The new SoroSuub V-35 Courier also makes its LEGO debut. It’s very detailed and has a stand-up driver position, which is unique for a Landspeeder. For a vehicle making its first appearance, it’s very worth the wait.

The Ubrikkian 9000 also returns with an updated design, though the bricks and pieces are identical. The mistakes have been corrected, which makes it more attractive now.

The Dewback is updated yet again, especially in its colour.

If you want the ultimate Mos Eisley Cantina LEGO set, this is the one for you. 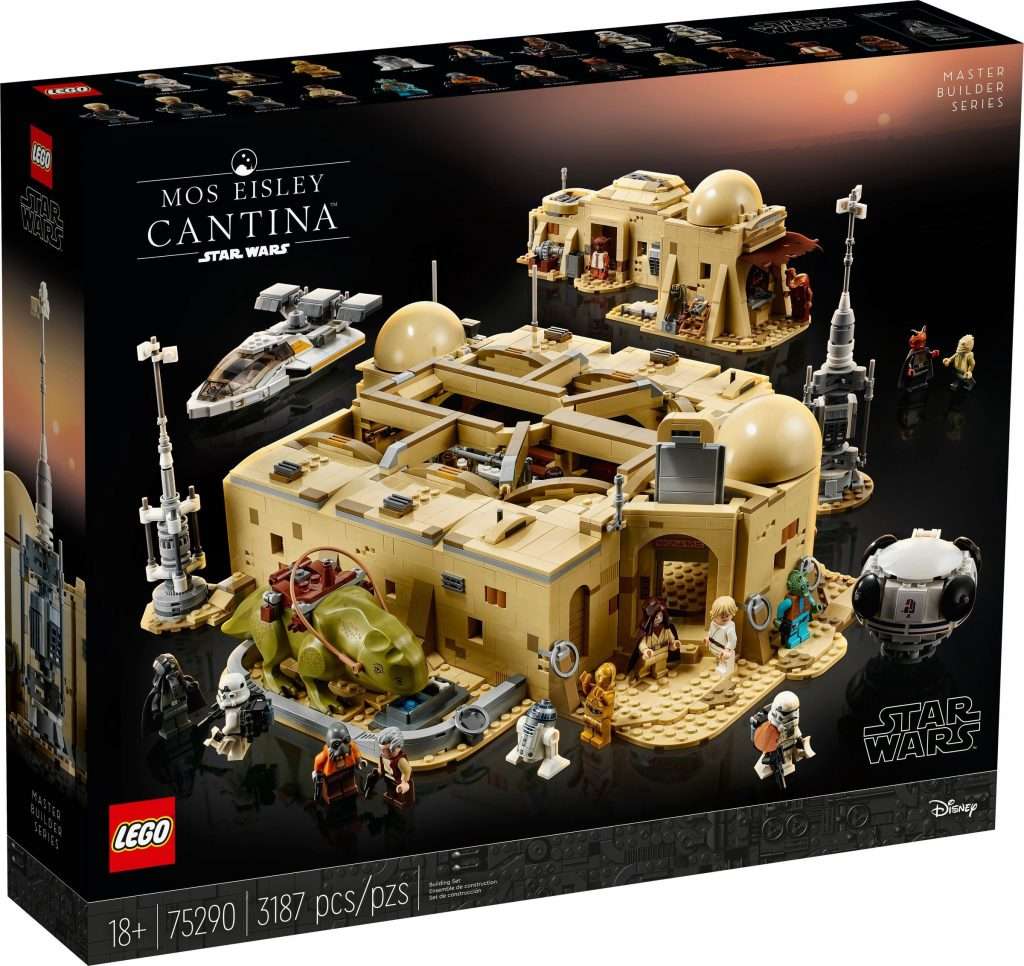 What do you think about the changes spread over 16 years? We can’t stop talking about the 2020 Mos Eisley Cantina set since it has so many new details and minifigures. Let us know what you think in the comments below!