LEGO Star Wars has been the most successful theme since its original release in 1999. Besides the regular seasonal lines of sets, the different retail stores in America have been releasing exclusive LEGO Star Wars sets.

With this set, there have been dozens of store exclusives over the years and we have selected and ranked the 10 greatest of them all. Many other sets deserve a mention but here are our personal selections.

At number 10, we have an old Toys R Us exclusive back from 2005. As you can probably guess, it was from the original Episode 3 line of sets and was physically available at the LEGO stores and Toys R Us only.

In general, it was a mash-up between two sets from the line and thus, the more affordable option if you wanted the two sets separately. The two sets included the very cool ARC-170 Starfighter and Droid Tri-Fighter. Besides that, the set included a CD of The Revenge of the Brick which was an incredible LEGO Star Wars short animation and an exclusive polybag that included a mini-fighter.

Last but not least, it included an Episode 3 poster that was only available from this set. 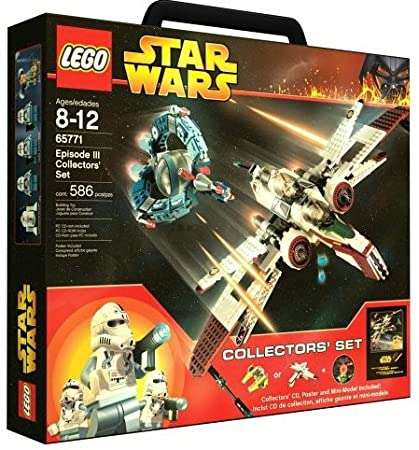 At number 9 we have a Toys R Us exclusive that hit the shelves in 2007.

Like most similar Hoth sets throughout the years, the 7666 Hoth Rebel Base did not impress with the design but it did come with a great minifigure selection for such a small set.

Nevertheless, you cannot really expect any grand structures and numerous features at such a low piece count and I consider this to be the best design out of all similar sets from the more recent years.

In the end, the set includes a variety of structures and vehicles which is more than enough at this price range when combined with the minifigures.

One of the most recent Toys R Us exclusives from 2016, the 75158 Rebel Combat Frigate, ranks 8th on our list perhaps because of how fond we are of Rebels.

In all honesty, this set felt a tad overpriced when it was first released if we consider the price per piece but the minifigure selection pretty much made up for the higher cost. We got an outstanding Ahsoka minifigure, perhaps the greatest of all that have been made.

The ship itself has a great design when it comes to the exterior. I have always loved the way the Frigate looks and LEGO recreated it perfectly for this size. Unfortunately,  due to the size, the set lost the opportunity to have a decent interior. 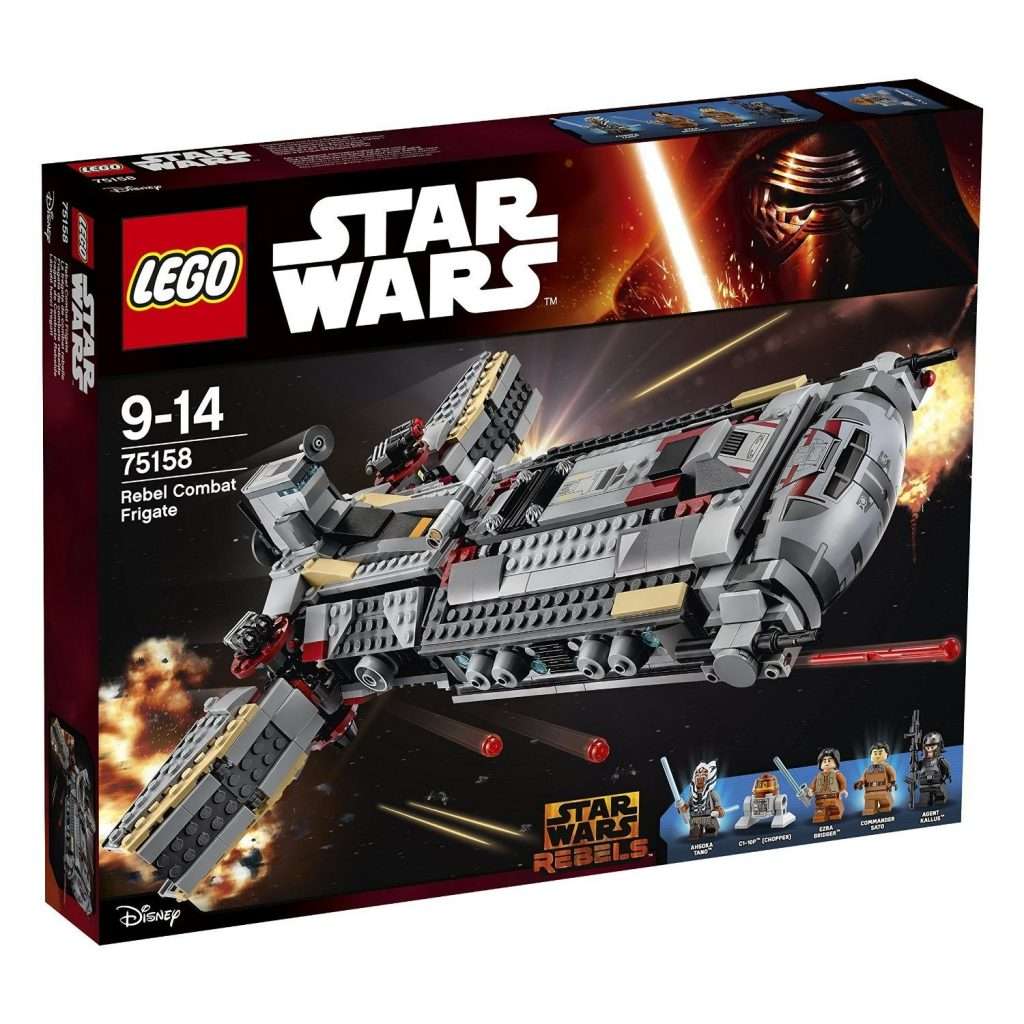 Set 75012 BARC Speeder with Sidecar is the smallest set on our list and was a Walmart exclusive back in 2013. You may wonder why such a simple set is ranked 7th if you weren’t into LEGO back in 2013 but the answer is simple – the minifigures.

This set included four great figures for this fair price and more importantly the Phase II Captain Rex. If you haven’t seen this minifigure before, it is nowadays worth more than $100 per figure. What can we say, it is an absolute beauty and the focal point of this set. 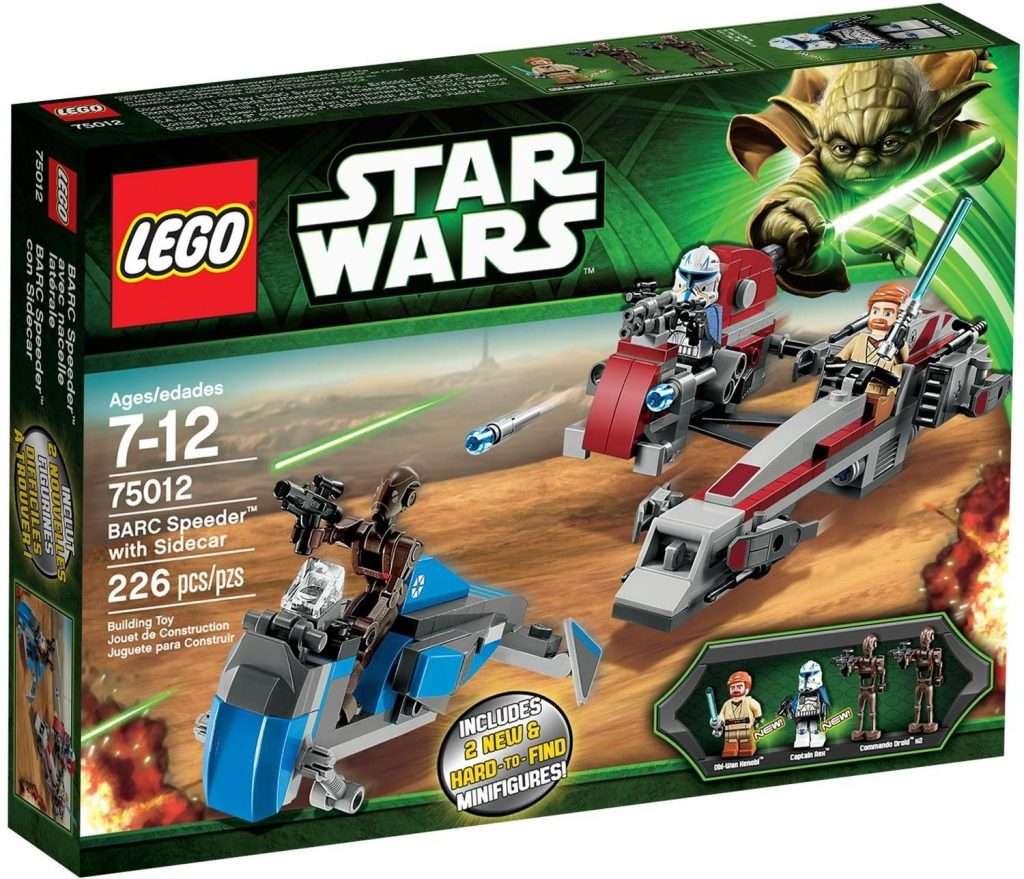 At number 6, we have yet another Toys R Us exclusive from 2010 which was the 8129 AT-AT Walker. I could have placed this set at a higher position if it was not for the relatively high price for 815 pieces.

On the other hand, the set included an incredibly large minifigure selection which you would rarely see in a similar set today. Externally, this has to be one of the greatest looking LEGO AT-ATs because of its clean design although it lacked certain details and the interior was truly inaccurate, which was improved in the more recent models. 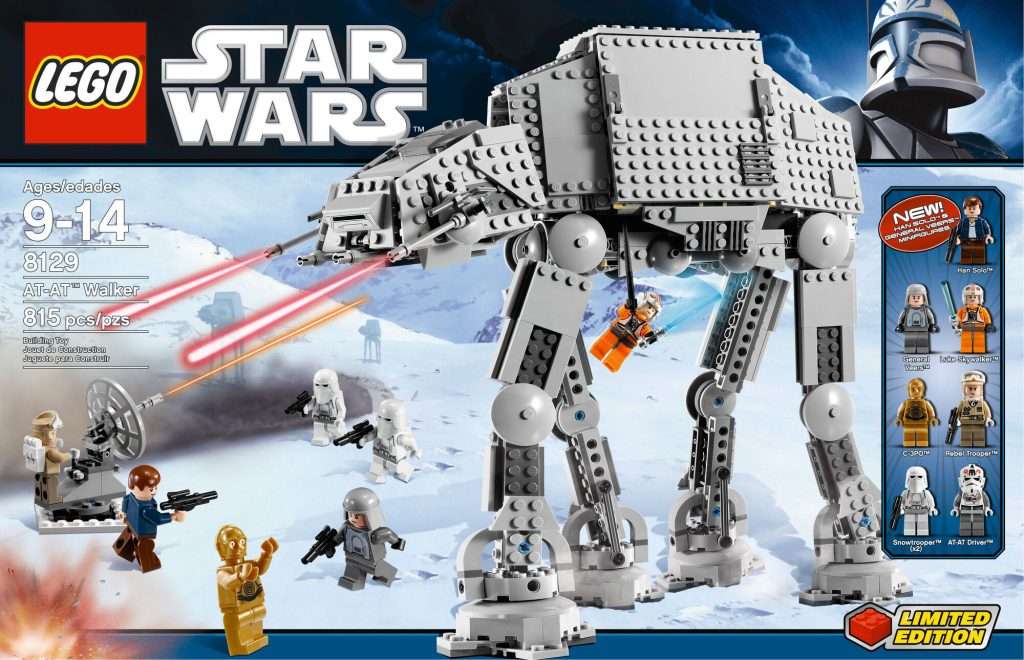 Yet another Toys R Us exclusive, the 9526 Palpatine’s Arrest from 2012 can easily rank among my favorite sets of all time based on minifigures. Like the original scene from Episode 3, it included all Jedi that participated in Palpatine’s arrest and tragically perished.

Overall, this set is incredibly diverse as it gives you the opportunity to change the setting. It also includes the Coruscant speeder which to this day has not appeared in any other set. There are numerous little features included like the ability to hide Palpatine’s lightsaber and other small details that make it incredibly fun to play with, which is something most sets lack nowadays. 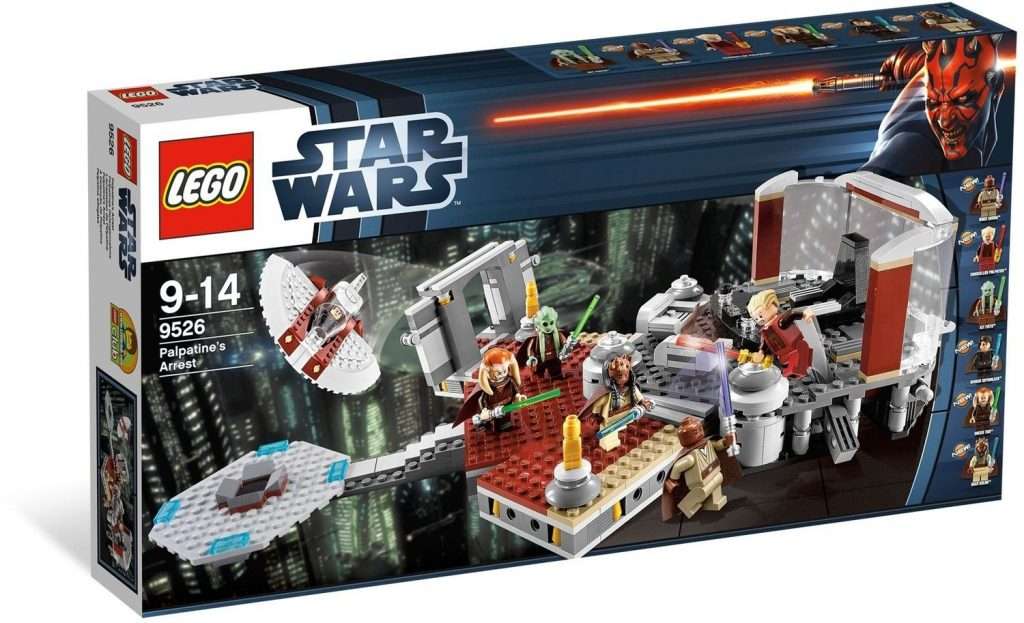 Set 75191 Obi-Wan’s Starfighter with Hyperdrive Ring was another Toys R Us exclusive from 2017 and by far, it is one of the greatest store exclusive sets in terms of design.

Besides the incredible minifigure selection, Obi-Wan’s Jedi Starfighter was great but not as cool as the Hyperdrive ring which got an entirely brand new design from its predecessor and looked amazing. It included a brand new handle in the middle which you are supposed to act like it does not exist but it truly worked well on this set.

As a whole, I highly recommend this set as you can still get it at a good price and it is incredible both for playing and display. 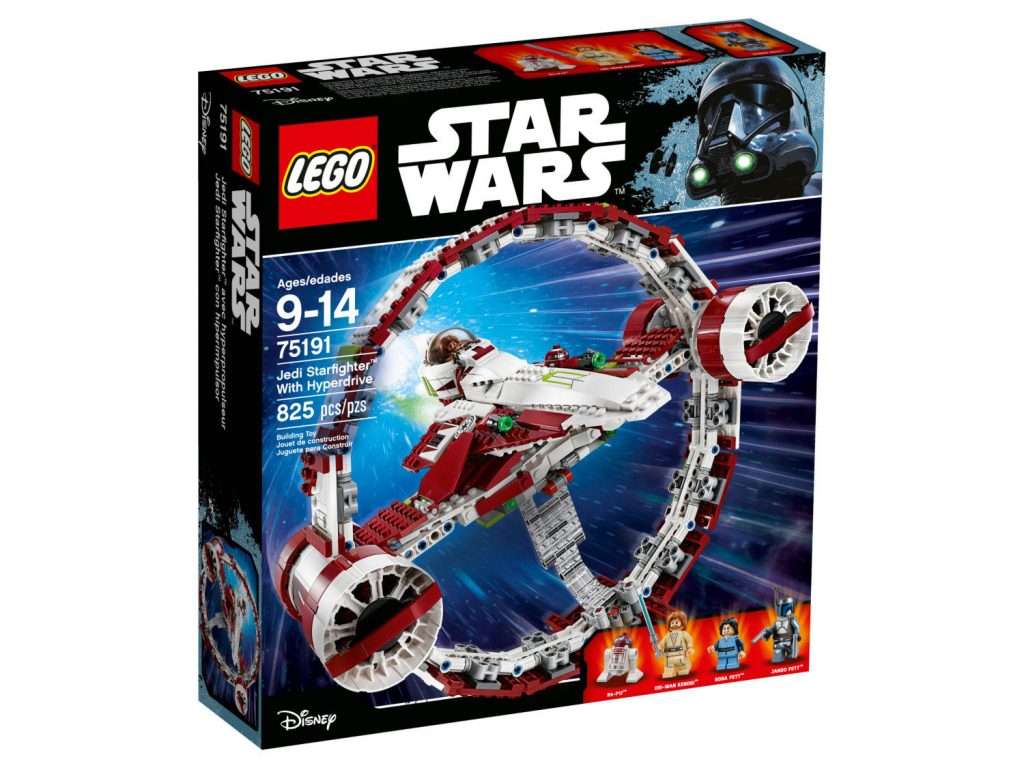 One of the only two Amazon exclusive sets, the 75251 Darth Vader’s Castle, takes the first of our top three spots. It is based on a location we hardly see in any of the movies or animations but is an incredible set and truly unique for a Star Wars set.

The whole idea behind the set was to have an incredible display piece on the front while the back offered a great open area with a great-looking interior to play with. The set included several brilliant minifigures and a bunch of small accessories and features that you cannot see in other sets. 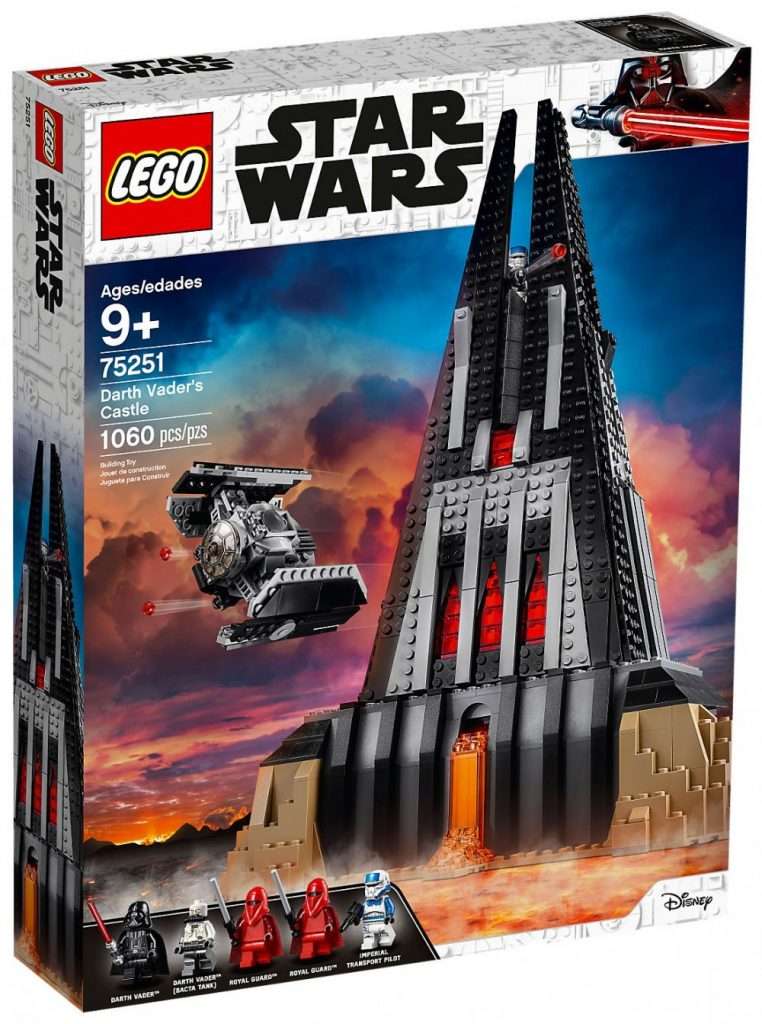 At number 2 from all the way back to 2005, we have another incredible Episode 3 exclusive, this time from Target. Essentially, this set combined three regular sets from the wave at a better price than getting them separately.

The curious thing about this set was that it included Obi-Wan’s Starfighter which remained exclusive to this set for nine years until it was released separately in 2014. Even more interesting, the fighter was actually the same as Anakin’s but they swapped the colors to red.

Overall, this is what I call the ultimate gift set for dedicated fans as it combined everything from the iconic space battle over Coruscant. 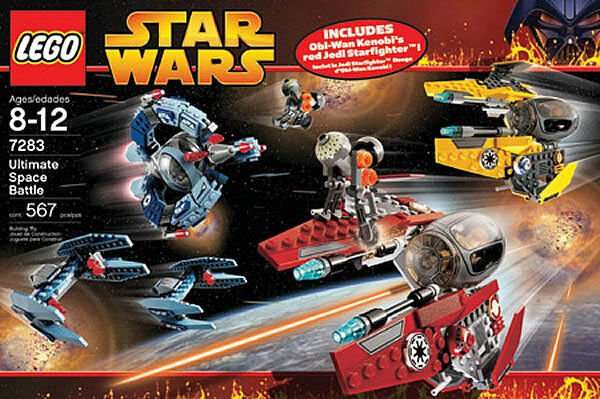 Finally, the title for the most incredible LEGO Star Wars store exclusive ever goes to 75292 The Razor Crest which will be the second Amazon exclusive after Darth Vader’s Castle. Why “will”? It is because the set has not been released yet but based on the looks of it and how incredible The Mandalorian is, there is no way that this set would not be absolutely incredible.

The Mandalorian was one of the greatest successes of 2019 and the LEGO Star Wars community has been waiting for a LEGO version of the Razor Crest. I believe that the design of the ship is incredible and absolutely as accurate as possible but the focal point here will definitely be the minifigure selection.

It will include two of the most anticipated minifigures in LEGO Star Wars history – the Mandalorian and the Child, more commonly known as Baby Yoda. In all honesty, is there another store exclusive set that comes close to this one?

While this type of store exclusives was entirely focused on the American market, we truly have to be thankful for the incredible releases throughout the years and there are several examples that could easily be ranked near the greatest sets of all times.

With so many scheduled Star Wars releases, I feel like the best years for the franchise are yet to begin and we can surely expect numerous store exclusives that we would rank in an updated top 10 list in the future.