Star Wars Galaxy’s Edge is a theme park located at Disneyland, California & Disney World, Florida. Both parks are almost identical and are recreations of a brand new world called Batuu.

Within this new world you can fully immerse yourself in all that is Star Wars, with every wall, pathway, doorway having been designed to replicate the Star Wars world. Characters will also be roaming around.

In Batuu we have Black Spire Outpost, an amazing marketplace where smuggler’s stop when travelling around the Outer Rim. This is where you can buy exclusive merchandise when you visit Galaxy’s Edge, but due to the restrictions, Disney is making it all available online.

Let’s take a look at the merchandise that normally would be exclusive to Galaxy’s Edge.

These Kyber crystals are used in Jedi or Sith Holocrons as well as being used to make lightsabers. When you slot a crystal into a Holocron, you unlock special lights, voice lines, and sound effects from various characters in the Star Wars universe.

For example, white Kyber crystals can allow you to hear Ahsoka Tano and Chirrut speak. As there are six common colours available, you can collect them all and reveal all the secrets within. The colours are red, blue, green, purple, white, and yellow.

There is even a rare black Kyber crystal that is found in only 1 in every 100 red Kyber crystals. They make the Holocron glow red and have the voice of Snoke. Getting a black Kyber crystal might cost a lot more too as they are the rarest colour among all of them. You can count yourself very lucky if you manage to get hold of one.

The Galaxy’s Edge lightsabers available at Savi’s Workshop are all built from small components, similar to the movie. The Kyber crystal you use will determine the colour of the lightsaber blade. It’s the most important component of a lightsaber.

Original Retail Price: $17-$26 depending on colour 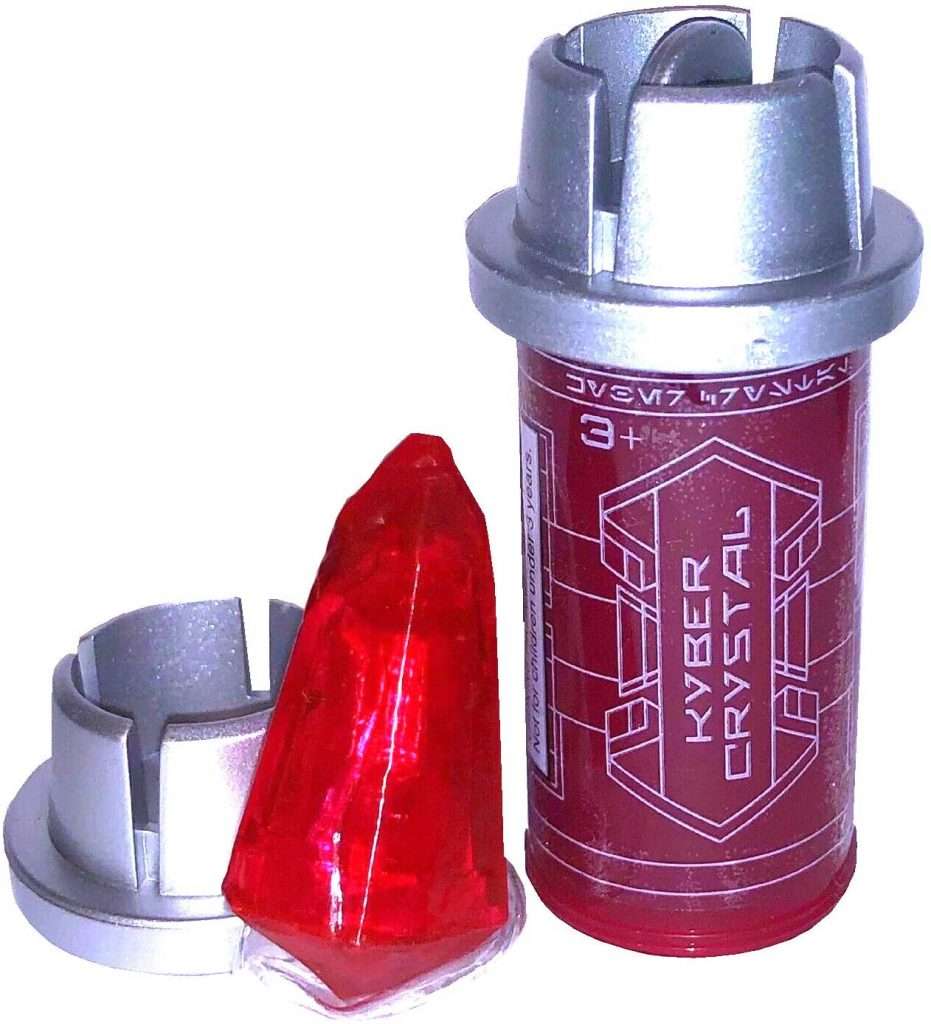 While you can build your own lightsaber in Savi’s Workshop and select from a variety of parts, you can also purchase higher quality lightsaber hilts and blades of your favourite heroes and villains from the series. Here is a list of hilts available.

These are her Rebels lightsabers, including her shoto lightsaber. They are curved and can change from green to blue blades, the first ones being able to do so.

Unfortunately, this only comes with one. This lightsaber has a curved hilt and the blade is red, reminiscent of Count Dooku’s. This is a reference to how Dooku taught Ventress Form II or Makashi. It is also possible to couple two to form Ventress’ double-bladed lightsaber.

This hilt comes with a connector that allows you to join a second hilt to complete Darth Maul’s double-bladed red lightsaber. Once assembled both blades can ignite for an authentic look. You need to buy two to complete the full lightsaber.

No one can mistake Count Dooku’s curved lightsaber hilt for anything else, since he fights with Makashi. It resembles the original, and the blade is red, of course. This allows for elegant slices, just like how the Count fought.

This beefy metal hilt is the exact same design as used by Darth Vader himself. Compared to other hilts, this is thicker. It has a red blade just like the original.

A rarer design, this elegant and yet simple hilt belonged to one of the many Temple Guards. Sadly, this hilt has no coupler, but its yellow blade is unique among the other designs.

Kylo’s crossguard lightsaber has two extra blades that also glow red, as per the original appearance. It shares the original’s crude appearance and exposed circuits as well.

This is Luke’s second lightsaber, just like it appeared in Return of the Jedi and later movies. It has a green blade and a thinner construction. 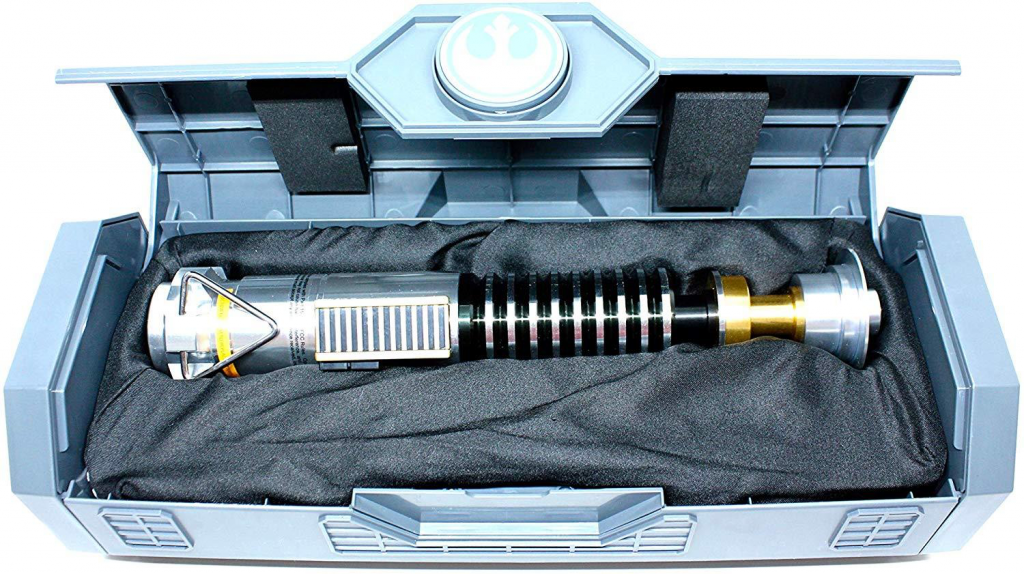 This lightsaber belonged to the legendary Mace Windu, and features its distinctive purple blade. The hilt is elegant and the emitter is thinner, just like how it first appeared.

Obi-Wan Kenobi wielded this lightsaber after he lost his first one fighting Darth Maul. Its design is a perfect replica of his first one, and it features a blue blade.

Rey reforged this lightsaber based on Luke’s weapon. It has leather pieces built into the hilt but overall resembles Luke’s old weapon. The blade is blue as well.

This is technically Anakin Skywalker’s lightsaber, but is called Rey’s weapon by Disney. It has a blue blade just as fans first saw it in the movies.

Before he became Kylo Ren, Ben Solo wielded this simple lightsaber. The hilt has details such as wear and dirt, and the blade is blue.

All of these lightsabers have sound effects when the blade is attached to the hilt. They also come with a box that only fits the right hilt design, depending on who owned the hilt, the storage box design also varies. Similar the Black Series Force FX lightsabers made by Hasbro, these are quality replicas that many fans will love.

Original Retail Price: Depends on the hilt but generally above $200

This belt clip allows you to clip a lightsaber to your belt. It works with all handmade lightsabers constructed in Savi’s Workshop as well as most Legacy designs. The exceptions are the Kylo Ren, Ben Solo, and Reforged Skywalker hilts. Carry your lightsaber around with you!

Cosplayers will love this clip as they can keep their hands free. No need to keep brandishing your weapons around anymore! 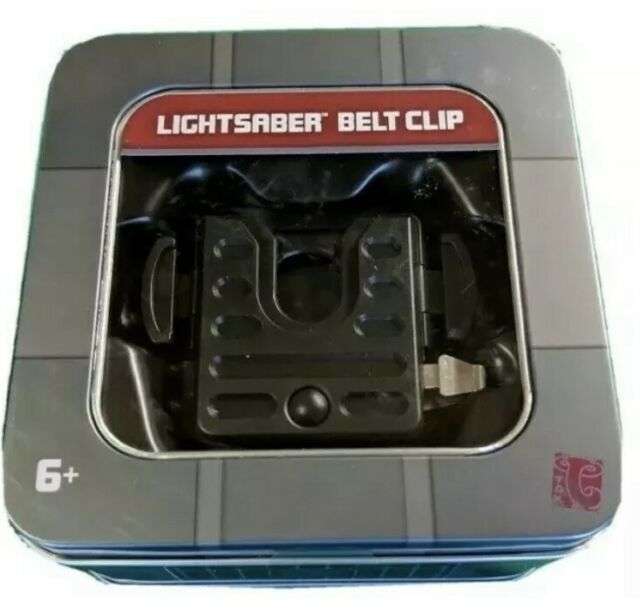 This Jedi Holocron works with the Kyber crystals we just mentioned above. Each colour will unlock different effects, such as colours, authentic dialogue from the movies or series, and sound effects.

There are hidden surprises that are waiting to be discovered by curious fans, so you’ll have to try all the crystals you can. As the sounds are random, you will have to try each crystal multiple times. This is a great way to discover those mysteries and immerse yourself in the lore of Star Wars.

The Holocron measures 3 x 3 x 3 inches, and the corners turn to reveal the centre. This is an accurate reproduction of the Holocrons’ function in the movies. The Holocron is built with a rechargeable battery and charging is done with a USB power cord.

The USB cord is included with the package. There is also a storage bag that comes with the box so you can carry it around. Fans who enjoy Star Wars conventions and cosplaying will love it! 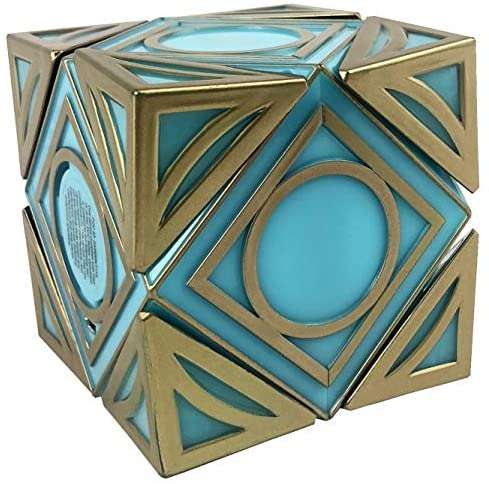 The Holocrons were not used by Jedi alone to store knowledge, but the Sith also employed Holocrons to pass down their knowledge and teachings. Unlike Jedi Holocrons, Sith Holocrons were built in the shape of pyramids or tetrahedrons.

They were also only opened by force-sensitive users who used the Dark Side. Just like the electronic Jedi Holocron, this Sith Holocron has a similar function. You need to purchase Kyber crystals separately and then slot them into the Holocron.

There are also secrets you can discover when you experiment. Perhaps you can put a Light Side crystal into the Holocron and see what it plays. Even without a crystal in the Holocron, the object is very ominous and makes for a great decoration on a bedside table or a desk.

You could also use it as a conversation piece and then activate it. Even casual Star Wars fans will be entranced. 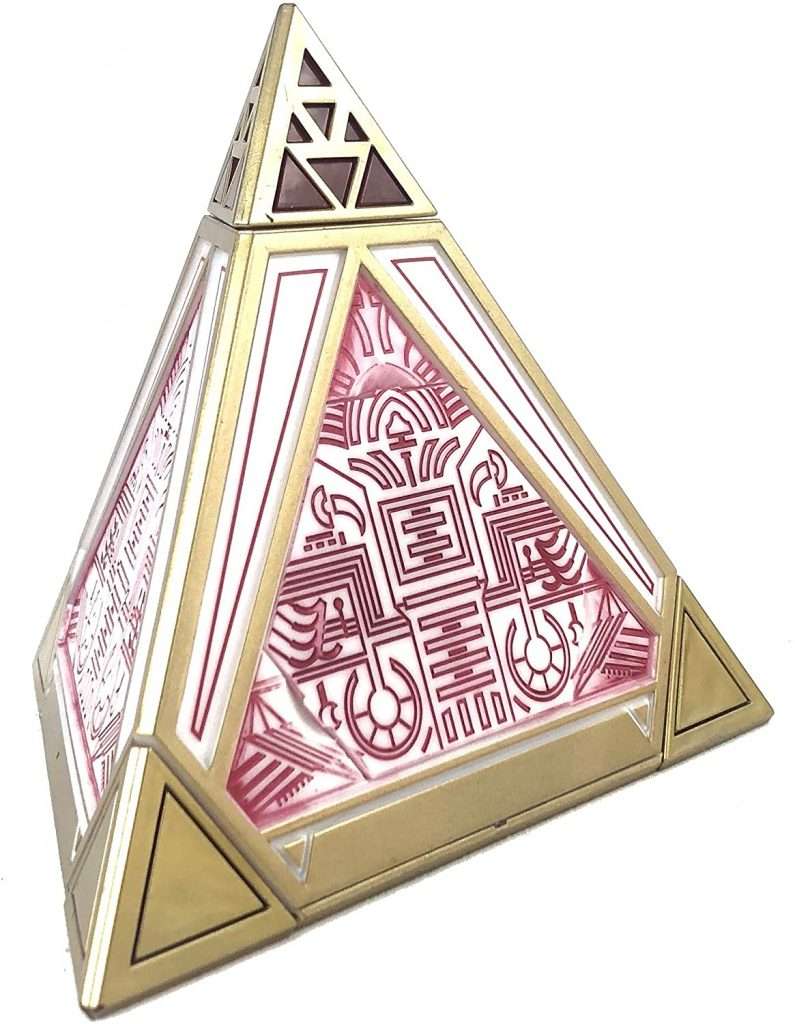 Galaxy’s Edge Dejarik Board Game with 8 Figures and Chequers

Chewbacca absolutely loves winning when he plays Dejarik on the Millenium Falcon, and this time you can play as well. This board game is originally available only in the Black Spire Outpost, but now you can purchase it online.

There are eight figures included just like in the original, and the circular game board also looks authentic. The little figures resemble their holographic selves, as Dejarik is also called Holochess.

The goal in Dejarik is to eliminate the opponent’s monsters. Each player has four and the actions of the monsters depend on their speed, statistics, and other features. Each monster also has a special attack.

If you also like chequers, you can flip the board and reveal a chequerboard. The pieces are either the Resistance in brown or the First Order in black. The instructions for Dejarik are included in the box, so you can easily learn in the span of a few games.

The whole set is quite portable and you can take it with you to parties or just to a friend’s home for some friendly games. Of course, we don’t recommend pulling people’s arms off like a Wookiee! 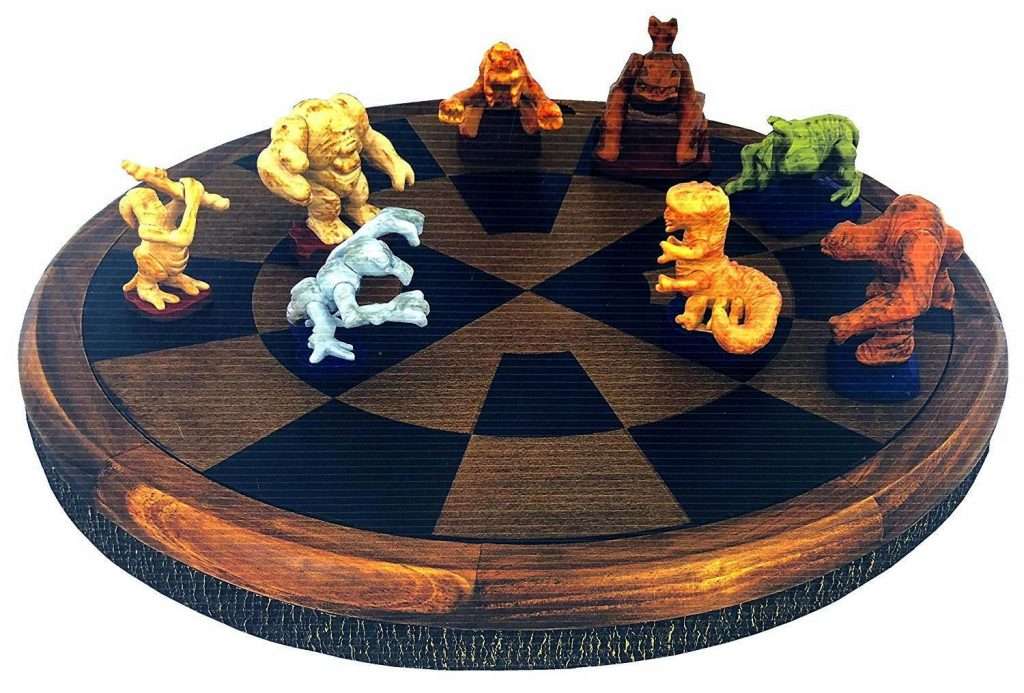 Culinary-inclined Star Wars fans can now rejoice as this cookbook is available online. Now you don’t have to make a pilgrimage to the Black Spire Outpost, just order it online! This cookbook was written by Chelsea Monroe-Cassel and Marc Sumerak and features a lot of elements that fans will love.

The cookbook is written from the perspective of Strono ‘Cookie’ Tuggs, an intergalactic gourmet who travels from system to system to sample and make the tastiest dishes. Whether it’s food from Jakku or the swampy planet Dagobah, this cookbook has it all. You can enjoy around 70 recipes that taste delicious!

Included with each recipe is a tale told by Strono. He gives some background information about the dishes and then explains how he makes them. The instructions are incredibly easy to follow and all the ingredients you need are listed for your convenience.

Among the 70 recipes, you can always find something for any course of a meal. Main dishes, side dishes, desserts, and beverages, you can make them all. There are even recipes for bread, sauces, and soups if you fancy them. This cookbook is a great addition if you want to make your love for Star Wars tangible and real.

Maybe take something to the nearest Star Wars convention. That would be a great way to share the food of the series and movies with other fans. This cookbook is going to make dinners fun! 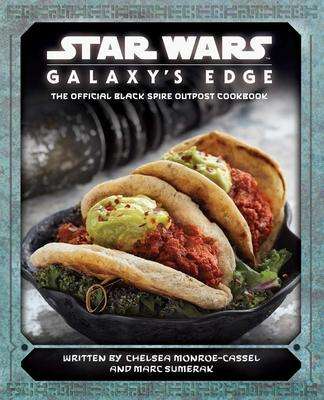 These are replicas of Han Solo’s lucky dice as seen on the Millennium Falcon. You can only get them at the Black Spire Outpost, but now they’re available online. The originals in the movie are aurodium plated, and they were what Han won his ship with. The dice are meant to be hung somewhere, and perhaps you can hang them in your car or display it somewhere. 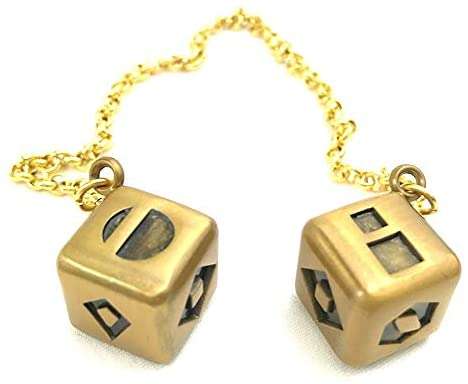 What do you think about being able to purchase these online? We’re glad that you can get them easier now. If you have any thoughts, do let us know below!