The Star Wars universe has always been so much more than a few movies and TV shows. Many of the most incredible Star Wars stories were born in what we know as the Expanded Universe – a Star Wars library that consisted of over 500 novels that were de-canonized when Disney acquired the franchise.

Even with the existence and development of the new canon Expanded Universe, old-school fans continue to cherish the incredible Star Wars Legends books while newer fans should definitely find the time to read at least the more important ones.

With this in mind, we have prepared the 10 Best Star Wars Legends novels that any fan of the franchise should experience. Of course, we did cheat a little by adding an entire book series to the list. After all, it would be quite pointless to mention a single book of any multi-book series as it is important to read all of them.

Fate of the Jedi was a collaboration series of 9 books written by three of the most important Star Wars authors – Troy Denning, Christie Golden, and Aaron Allston. It is curious that the final book came out just around the time Disney acquired Star Wars in 2012.

The story from the books takes place between 43.5 ABY and 44.5 ABY (ABY stands for After the Battle of Yavin) and follows a turbulent period for the Galactic Alliance after Jacen Solo, son of Leia and Han, turned to the Dark Side. Having lost their trust in the Jedi, the Galactic Alliance arrests Luke Skywalker and sends him into exile with his son Ben. Curious, right?

Overall, the series follows the mystical and adventurous journey of the two characters who seek answers to the fall of Jacen. We get introduced to new characters, including a forgotten Sith tribe and experience the Force in a new way.

Titles in the Fate of the Jedi Series: 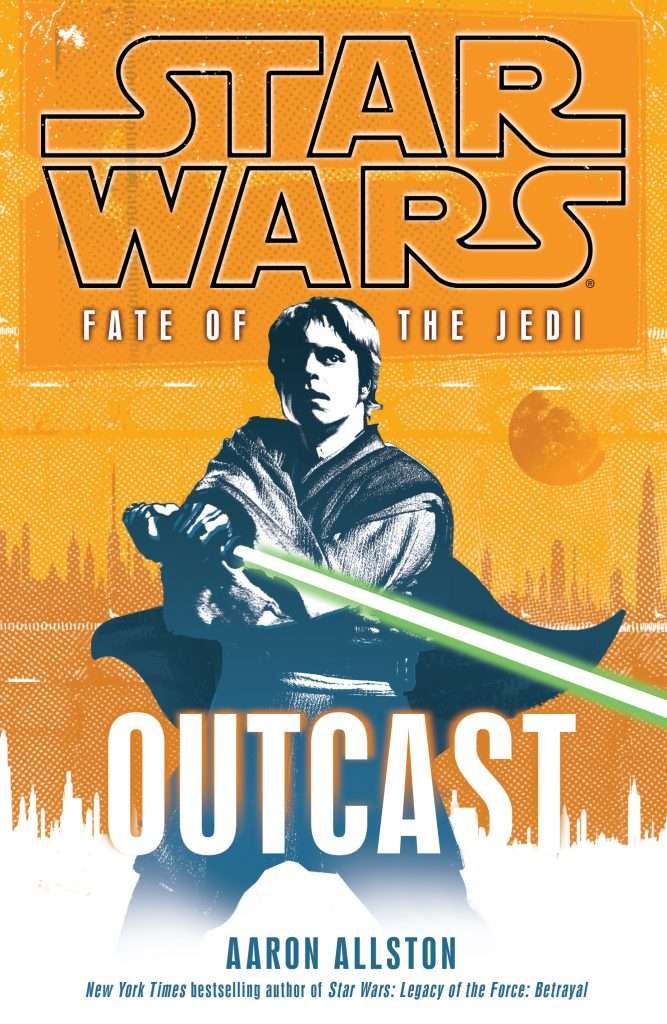 9. Legacy of the Force (Series)

Another collaboration series of 9 books by Troy Denning and Aaron Allston. This time, however, the third author was another fan-favorite author – Karen Traviss, who is behind some of the most incredible Star Wars novels.

If you enjoyed Fate of the Jedi, you should absolutely continue with Legacy of the Force as it takes place just a couple of years before that and once again, follows the fall of Jacen Solo into the Dark Side. We can safely say that these books are incredibly personal and even heartbreaking at certain points. They will take you on a desperate journey with Jacen’s family who are in search of a way to stop him.

Titles in Legacy of the Force series: 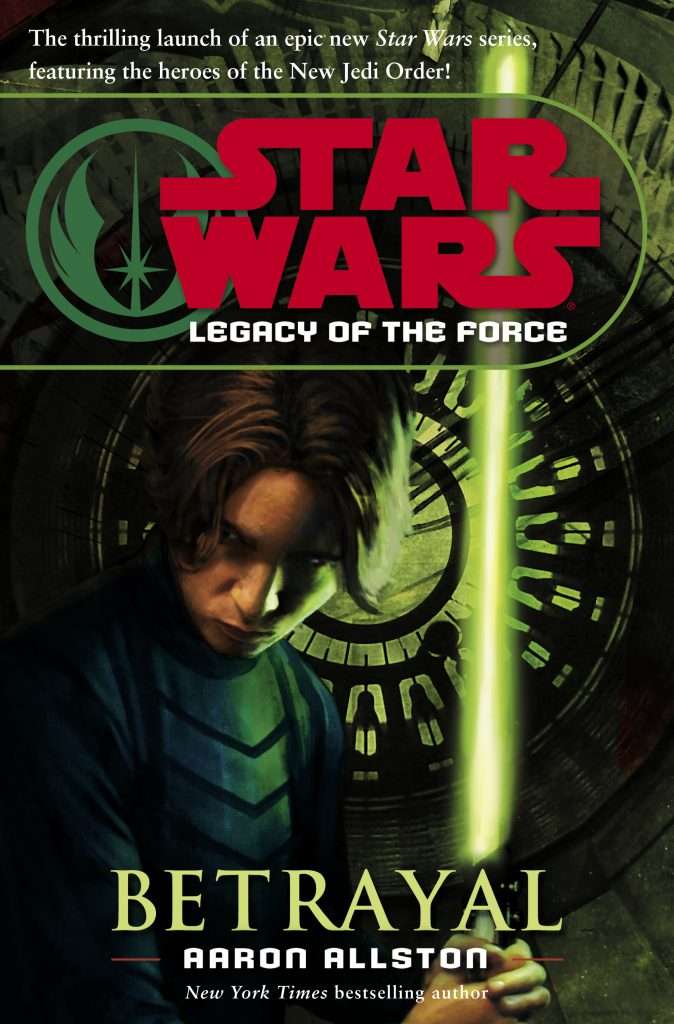 If you are a fan of the Prequels and Darth Vader, then this novel by James Luceno is a mandatory read. We can safely say that this is a direct sequel to Revenge of the Sith as it is set almost directly after Anakin Skywalker officially becomes Darth Vader.

Overall, the novel presents a different Vader than the one you see in the movies. It follows his transition path when he is torn with emotions and does not know whether he chose the right path. You will follow his mission to destroy all surviving Jedi after Order 66 which does have a predictable outcome but nevertheless, is a great story. 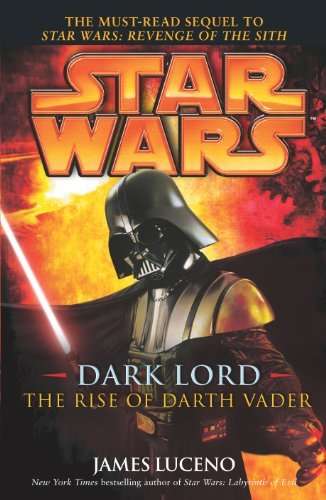 This series of three books by Kevin J. Anderson follows the attempts of Luke Skywalker to revive the Jedi Order by starting a Jedi Academy on Yavin IV. While this is the focus point of the overall trilogy, we go through a lot of action involving Han Solo and Chewbacca, and also the continuous war between the new Galactic Alliance and the surviving forces of the Empire.

We can safely assume that the creators of the Sequel trilogy of movies took their inspiration from this series of books. You will find a lot of resemblance with the story of Kylo Ren which makes it an even more important read.

Titles in The Jedi Academy Trilogy 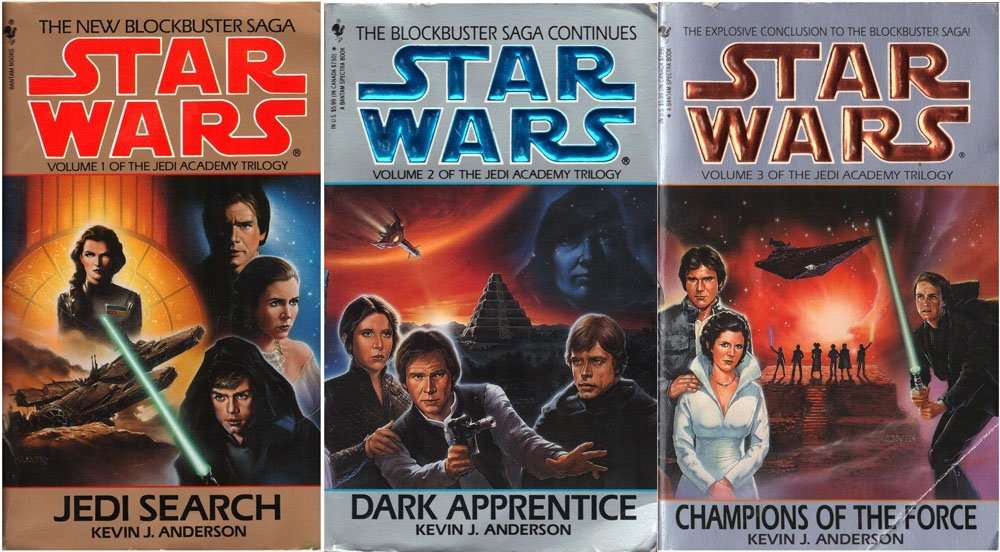 Have you ever heard the tragedy of Darth Plagueis The Wise? You surely remember the iconic conversation between Anakin Skywalker and Chancellor Palpatine in the Coruscant Theater. If you do and you have always wondered who Darth Plagueis actually is, then this is the book for you.

Written by James Luceno, it follows the path of the Sith Lord from his early years as an apprentice to his death. It also serves as a prequel to the actual Prequel Trilogy as it shows the path of Palpatine and his rise to power. All in all, this book will answer many questions for you and I guarantee that you will finish it in no time. 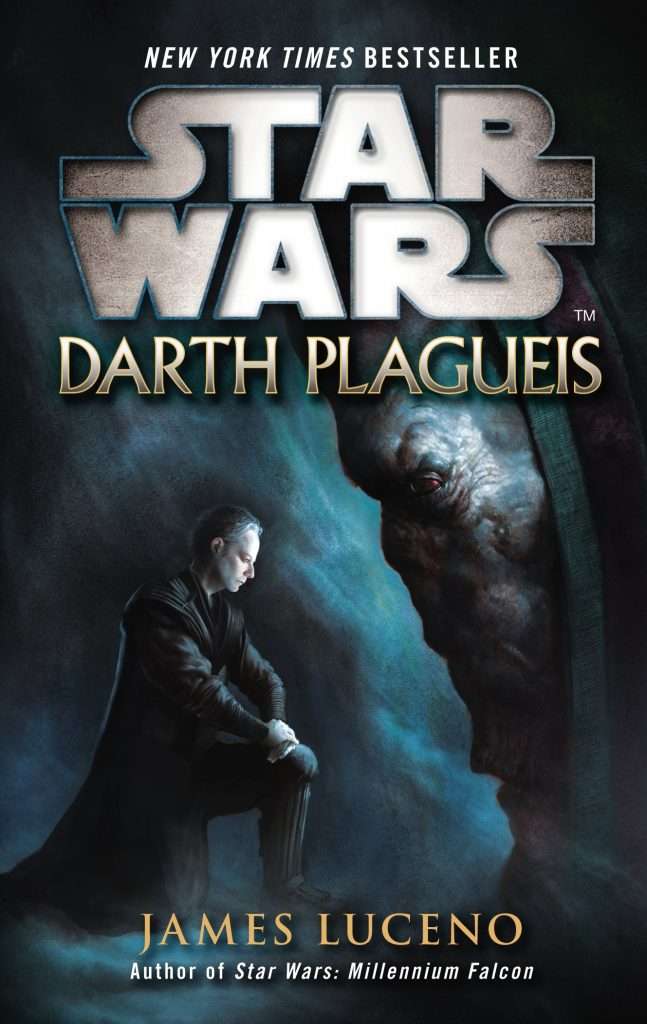 The Black Fleet Crisis Trilogy by Michael P. Kube-McDowell gives us a rather different story that does not strictly focus on a couple of characters but is definitely more military and politically focused. The story is set around 16 years ABY and introduces the Yevethan forces, former Imperial slaves, and their genocidal campaign to conquer the Koornacht Cluster.

This happens at a time when our beloved characters are separated. Chewbacca is on Kashyyyk with his family, Luke is on an enlightenment mission to his mother’s homeworld and Leia is going through a personal crisis.

All in all, this trilogy presents a few new aspects of the lives of our favorite characters and also introduces a lot to the lore in terms of character origins and force powers. 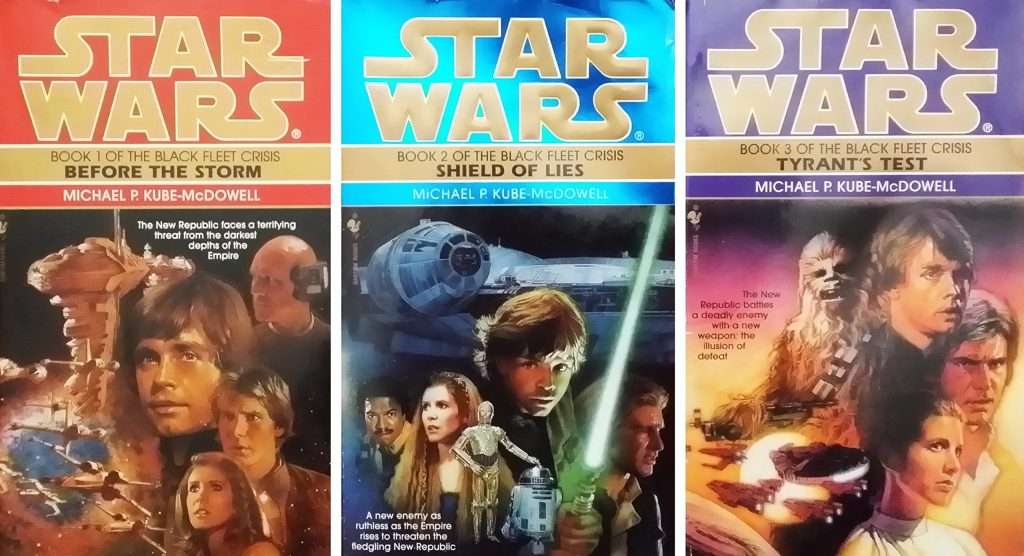 This masterful trilogy of books by Drew Karphyshyn explores the path of Darth Bane and his Sith apprentice Darth Zannah. If you have watched Star Wars, you should already be familiar with the Rule of Two. It means that there can only be two Sith that are together – a master and an apprentice.

This rule was originally established by Darth Bane, one of the most powerful Sith Lords to ever live. Through the trilogy of books, you will follow his path through the destruction of the Sith and the establishment of this new rule. 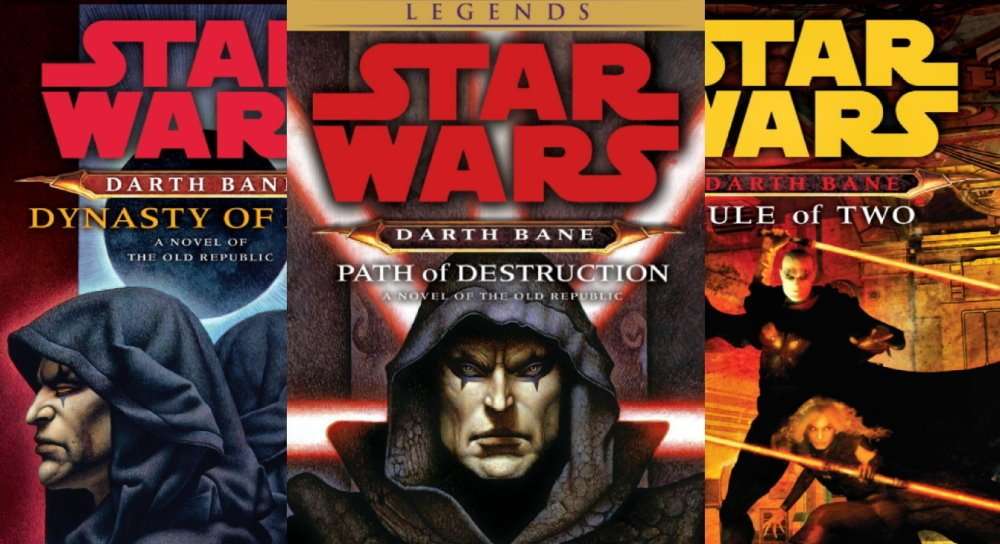 Now, this series of books will be a long read as it spans through a total of 19 books written by a dozen different authors. At the same time, not all books are equally greatly written and a good read. However, the series follows an outstanding and epic story in the world of Star Wars which can easily be considered equally great to the actual Skywalker Saga from the movies.

You will read about the biggest threat that the galaxy has ever seen – the invasion of the Yuuzhan  Vong from the Unknown Regions. You will meet many new characters and also finally see the development of many old favorites. If you have never heard of the Yuuzhan Vong before, it has always been a dream to most hardcore fans to see these species in the cinematic universe.

We can safely say that this period in the Legends lore is among the most important ones and a mandatory read if you have the patience for 19 books. 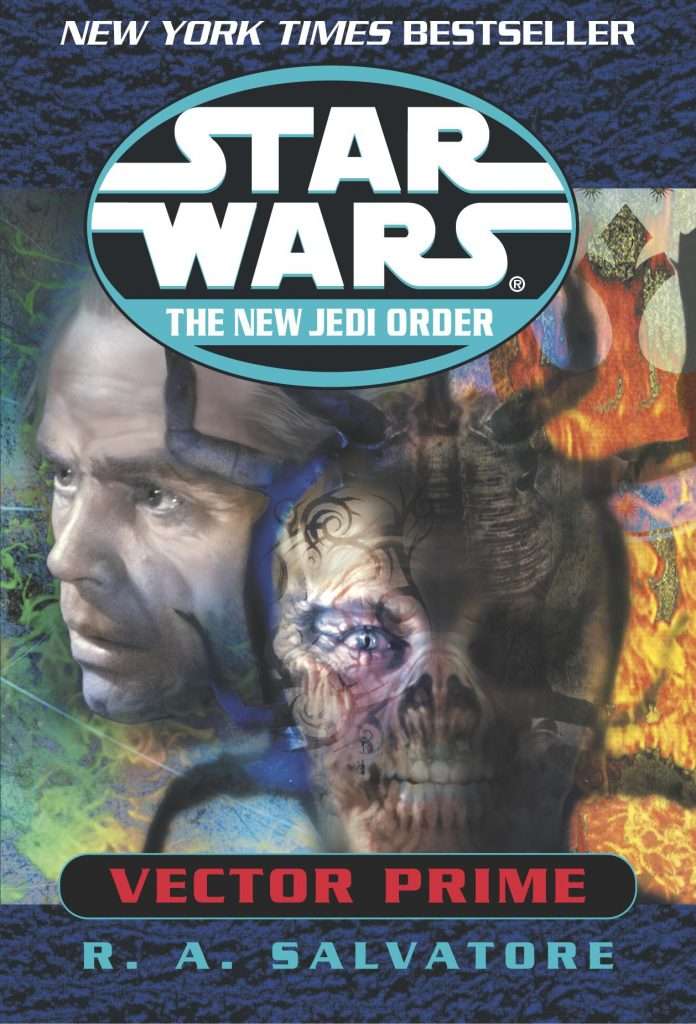 2. The Hand of Thrawn (Two-Book Series)

If you were somewhat familiar with the old canon, you have heard about the absolute fan-favorite character – Grand Admiral Thrawn. If you have heard that name and what it means in the Star Wars community, you can expect to see these books around the top of any list.

The two books that represent The Hand of Thrawn duology take place a decade after the original Thrawn Trilogy which will be discussed below. Since it would be hard not to spoil the good parts of the story if we try to explain it, let’s just say that Grand Admiral Thrawn returns from the dead in a curious and deceptive way at a time when the remaining Imperial forces try to negotiate peace with the New Republic.

To learn what and how this happens, you will have to read the two incredible books. For me personally, these books made me fall in love with Luke Skywalker and Mara Jade, his wife, once again.

Titles in the Hand of Thrawn series: 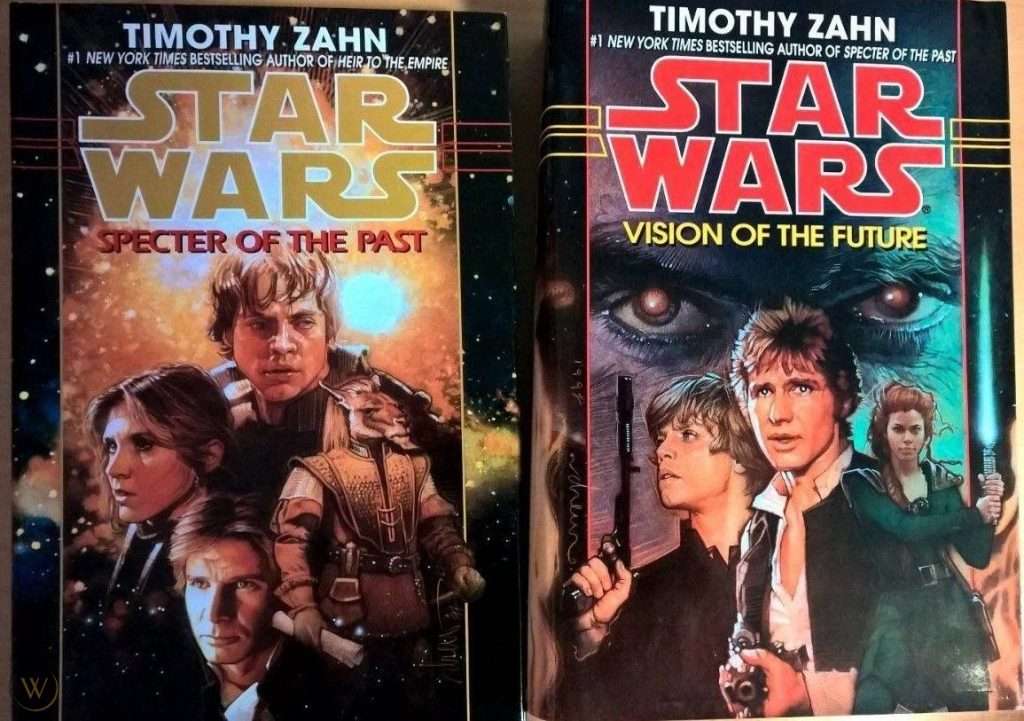 To me, this trilogy remains as the most perfectly written piece of Star Wars to date. It certainly changed the universe and introduced many of the most incredible characters in the franchise. All these years later and despite all the love I have for the Sequel Trilogy, I still consider this continuation of the story to be my personal favorite and I wish we could have seen it in a movie version.

Nevertheless, the Thrawn that we got in Star Wars: Rebels and the new canon is incredible and is directly influenced by this book trilogy. If you are yet unfamiliar, the Thrawn Trilogy follows the remnants of the Empire and their war against the New Republic. Of course, Grand Admiral Thrawn, who was a military and tactical genius, is the one leading the Imperial forces.

If you have never read a Star Wars Legends book before, there is no better way to start your journey in the old canon. Since it is set just 5 years after the fall of the Empire, it will give you a good introduction into life in the galaxy after the war and the life of your favorite movie characters. You will also meet many new iconic ones that also appear in other books from our list above.

Last but not least, there is now a brand new series of books about Grand Admiral Thrawn by the same author, Timothy Zahn. It is part of the new canon established by Disney and is also an incredibly well-written story about the character. It does, however, focus on the history of Thrawn before the fall of the Empire, all the way to his youth. It is curious that Disney let the author write this as if it fits perfectly into the non-canon Thrawn Trilogy. I deeply suggest that you read both series but starting from the Legends trilogy first!

Titles in the Thrawn Trilogy: 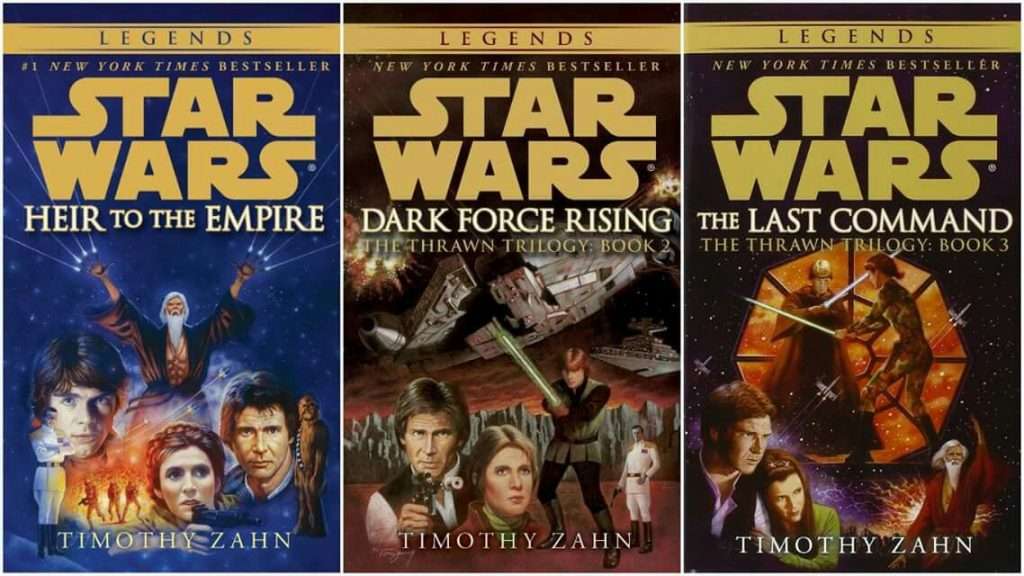 We now conclude our list of books and series but there are countless other novels that deserve your time and attention. Disney may have created their own canon that will continue to grow in the future but the old Expanded Universe is equally important.

Consider it an alternative universe but the stories that you will find will forever change the way you feel about Star Wars. In the end, if you fail to find the pleasure in reading the old canon, you can always stick to the new books after 2014 and leave the Legends lore behind.