The latest Star Wars comic line from Marvel is the adaptation of Rogue One – A Star Wars Story.  Join Jyn Erso and her team of rebels in a daring mission to steal the Death Star plans from under the noses of the Empire. Once again the artist John Tyler Christopher knocks one out of the park with this cool action figure variant cover with Sergeant Jyn Erso on a vintage card. If only the toy company Hasbro had released this for real instead of on its generic Rogue One packaging.

The good news is that Hasbro have listened to the fans. They announced at Star Wars Celebration Orlando that the Vintage Collection 3.75″ figures will be relaunched in 2018, so maybe we will see Jyn Erso on a vintage style card!

Anyway, back to the comics: 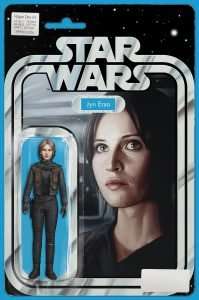 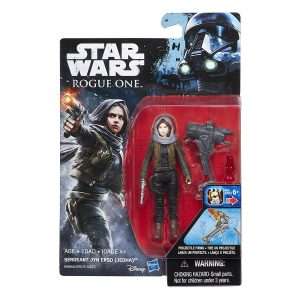 Check out all of the John Tyler Christopher covers in my Star Wars action figure variant checklist.