Even though Star Wars issue 1 and the action figure variant cover were a great success, for some reason comic book shops didn’t pre-order as many copies of issue 2 featuring Han Solo. This resulted in a smaller print run and therefore reduced availability worldwide. It was at about this time that collectors realised that the action figure covers could become a more permanent fixture. At around the same time John Tyler Christopher had created new action figure covers for the new Darth Vader and Princess Leia series, which perfectly complimented the main Star Wars series. 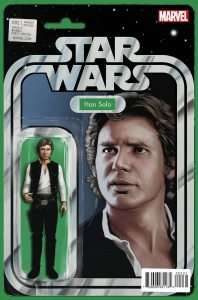 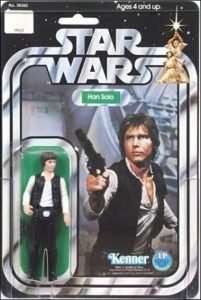 Issue number two of the new Star Wars comics by Marvel continues the Story of our favourite heroes Luke, Leia and Han Solo. Set between Star Wars – A New Hope and The Empire Strikes back.

Collecting these amazing covers? Check you have them all on my up to date Star Wars action figure variant list.