In Disney’s recent Star Wars live-action television series – The Book of Boba Fett, fans were introduced to an intimidating, formidable Wookiee bounty hunter known as Black Krrsantan – named for the black coat of fur that covered his body. Many casual fans less familiar with the expanded lore have wondered, who is Black Krrsantan? What was his previous history with Boba Fett? And what is Black Krrsantan’s life story that explains his brutality, combat abilities, and fearsome reputation in battle?

Luckily, Black Krrsantan – also known as “Santy,” “Black K” and “Santo” was featured heavily in a number of comic series. These depicted some of the key events around his infamous career, including an encounter with Obi-Wan Kenobi on Tatooine after the fall of the Galactic Republic, contracts under Darth Vader’s employment and multiple run-ins with an Imperial archeologist named Dr. Aphra. 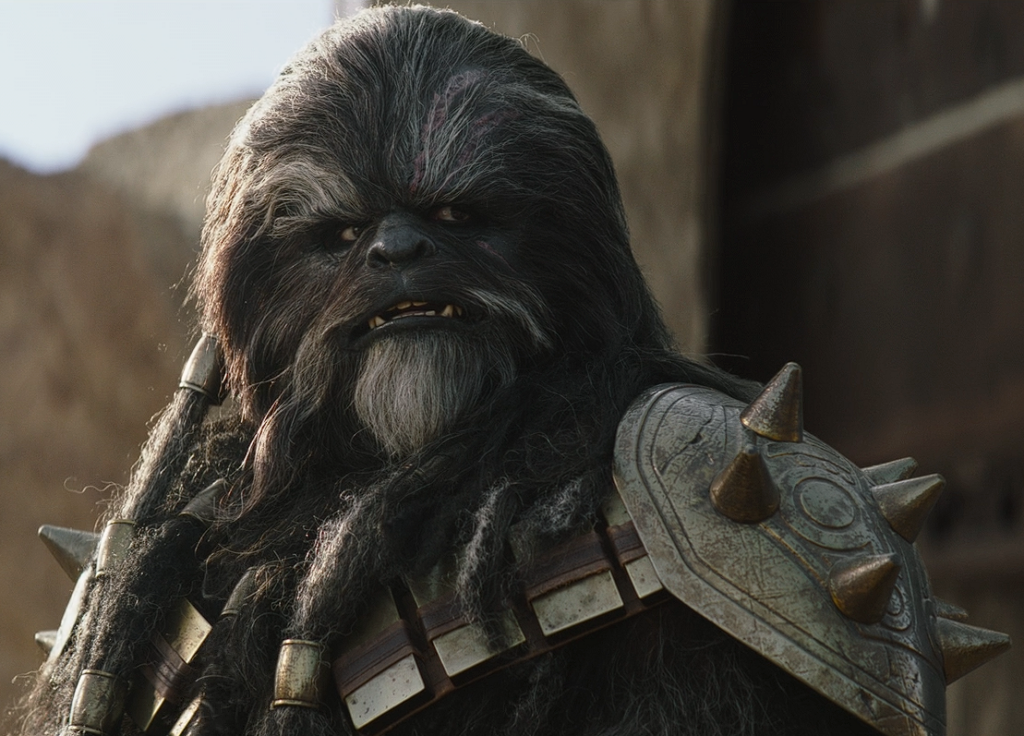 This article will provide an overview of Black Krrsantan’s backstory, drawing primarily from the events depicted in the Darth Vader (2015), Star Wars (2015) and Dr. Aphra (2015-2020) comic series. Fans will learn about some of his most significant “employers”, adversaries and exploits leading up to events of the show.

So, without further ado, let’s get started.

Banishment and Becoming a Gladiator

While Black Krrsantan hailed from Kashyyyk as do all Wookiees, much of his early life there is unknown. For a society that valued compassion, honor and morality, Black Krrsantan’s savageness and cruel personality clearly ran afoul of these norms. Consequently, it is likely for those reasons that he was eventually banished from the planet and shunned by his own people. After attacking and dispatching of the weaker opponents, the deadly Wookiee forced a slaver named Noka to take him to the Xonti Brothers aboard a ship. Once they arrived on Chagar IX, Black Krrsantan impressed the Xonti Brothers with his audacity and fearlessness.

Nonetheless, the Xonti Brothers forcefully “enhanced” the Wookiee cybernetically by installing metal plates all over his skeletal structure, including his knuckles – a procedure that must have been excruciating to endure. While it did make him physically stronger moving forward, Krrsantan vowed one day to exact revenge on the Xonti Brothers with the same cruel procedure they made him endure. Afterwards, Krrsantan was then thrust into the fighting pits, where he excelled while lesser fighters died. In addition to his already superhuman Wookiee strength, Black Krrsantan demonstrated his newfound and brutal power by knocking out another fellow gladiator with a single punch. He then dispatched of a Transdoshan, Red Nikto and Houk without using his weapons – capping off the impressive display of violence to potential bidders by snapping the neck of his foe.

Krrsantan eventually became a gladiatorial champion, was sold off to the highest bidder and eventually won his freedom. Once he was a free Wookiee and honed in the deadly art of combat during his time in the fighting pits, Krrsantan chose to become a mercenary bounty hunter – selling his deadly services to whoever paid him the most.

A Failed Job for Jabba

In 10 BBY, Krrsantan was hired by Jabba the Hutt on Tatooine to locate the person that helped a moisture farmer to resist the “water tax” that his henchmen had tried to collect. At the Lars Owen homestead, Krrsantan encountered Obi-Wan Kenobi – who was secretly keeping a watch on the 9-year-old Luke Skywalker at the time. 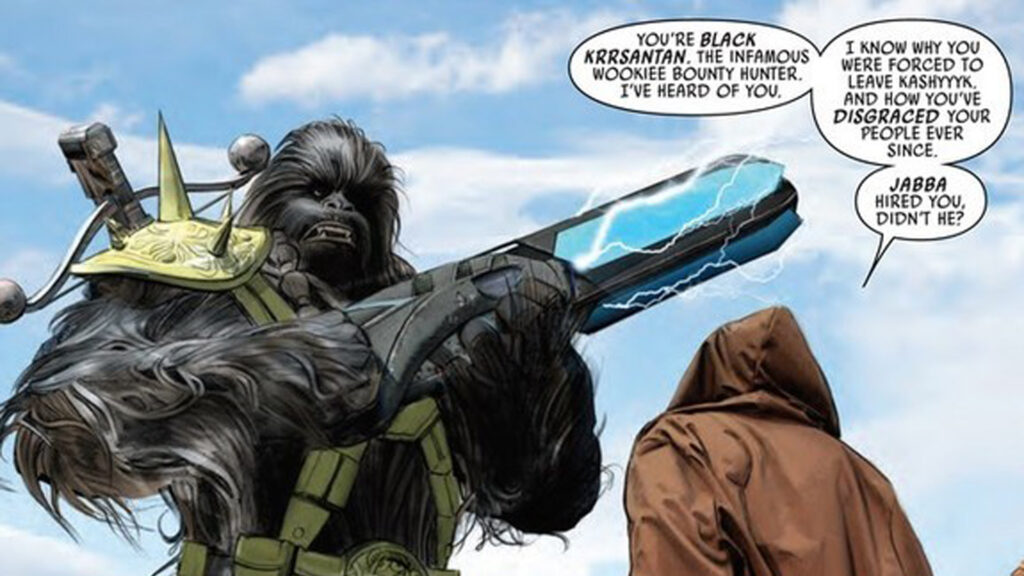 After capturing Lars Owen and believing him to be the culprit, Kenobi made himself known to the mercenary and intervened in order to save Owen. Before Kenobi could negotiate or use Jedi mind tricks on the savage Wookiee to defuse the situation, Krrsantan attacked Kenobi and caught him in an electro-net.

Kenobi countered with his Force powers during the battle and eventually activated his Jedi lightsaber – catching the mercenary off guard. Kenobi scored a hit when he slashed Krrsantan – causing a permanent scar over his left eye. Krrsantan fired more shots from his laser crossbow but was eventually defeated by the Jedi master when he fell off the side of a cliff. To escape Jabba’s displeasure for the botched job, Krrsantan then left Tatooine for some time.

A Mission for Vader

In 0 BBY, Krrsantan would be back in Jabba’s good graces and returned to work for him on Tatooine alongside Boba Fett. During this time, Darth Vader paid the crime lord a visit and requested the service of his best bounty hunters. Jabba obliged, providing the Sith Lord with his top two mercenaries.

Vader then met the bounty hunters outside the remnants of a Tusken raider camp and assigned Fett to track down the rebel pilot who had destroyed the First Death Star. He then instructed Krrsantan to capture an agent of the Emperor – whose identity and purpose was shrouded in secrecy. 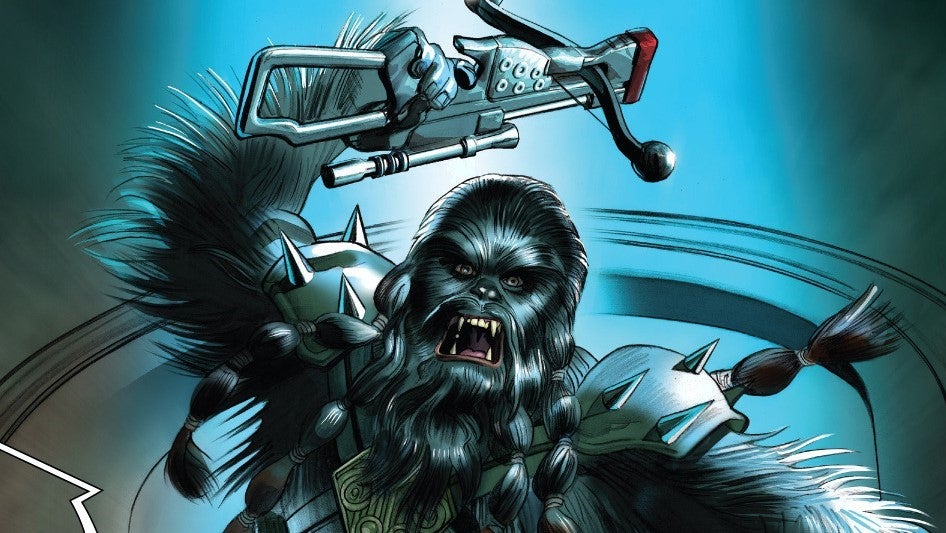 Krrsantan eventually tracked down the Imperial scientist known as Cylo, the cybernetics genius originally behind Vader’s lifesaving suit. Cylo became aware he was being followed and the bounty hunter was forced to capture him before being able to learn more about his intentions. Krrsantan brought Cylo before the Sith Lord, who used an interrogation droid to torture the scientist. Vader then learned that Emperor Palpatine was planning to relegate him to a ceremonial role by using Cylo’s inventions as the brute enforcer of the Empire instead. With his mission successfully accomplished, Krrsantan left Vader to deal with the unfolding Sith drama.

After a volunteered return to the fighting pits for sport, Krrsantan and a number of mercenaries were approached by Dr. Chelli Aphra – a rogue human archaeologist of the Empire. Aphra recruited the bounty hunters on a mission to rob an Imperial transport carrying seized credits from a criminal organization known as Son-tuul Pride.

Aphra’s inside information allowed the team to successfully disable the ship in space, and Krrsantan tore it apart by towing an asteroid into the ship’s hull. This released the credits stored within the vaults which vented into space. The team captured some of the released credits but unbeknownst to them, Aphra and Krrsantan had other means of recovering the remainder of the wealth. 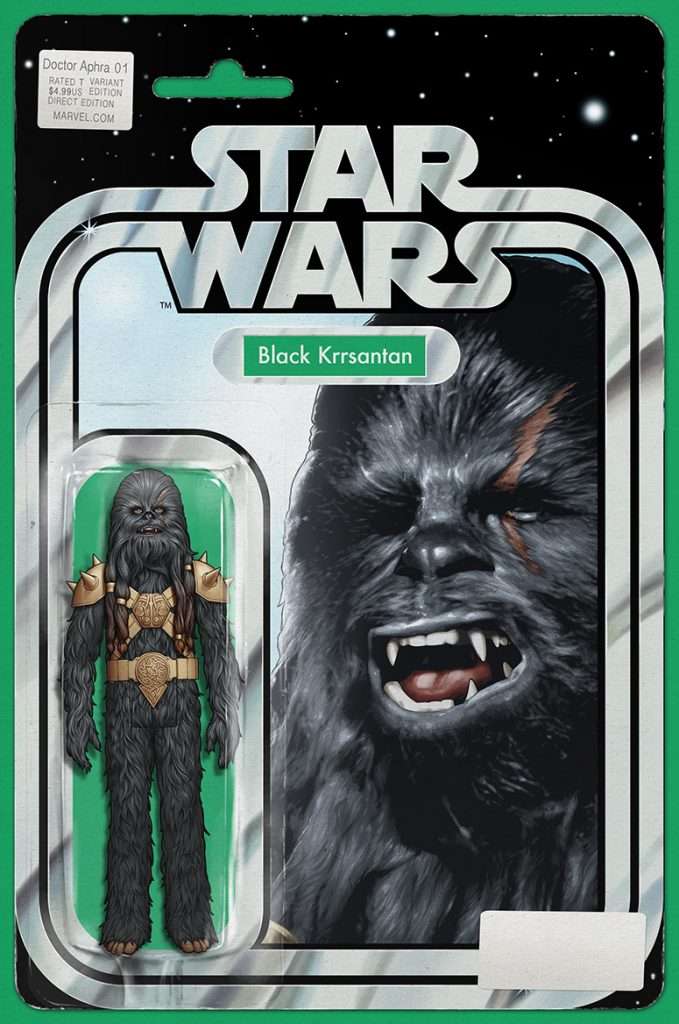 Krrsantan agreed to help Aphra with the plot, since she promised him more money later and her assistance in tracking down the Xonti Brothers for revenge. They then travelled to Anthan 13, where it was revealed that Darth Vader had been behind the heist plot all along.

The Battle of Vrogas Vas

Sometime after, Vader tracked Luke Skywalker to the planet Vrogas Vas, but crash landed after his TIE fighter was shot down by rebel pilots. Once again, Aphra enlisted Krrsantan’s help to rescue the Sith Lord in exchange for more credits. After Aphra located Skywalker and temporarily stunned him, Han Solo with Chewbacca came to the rescue and a fight ensued.

Krrsantan then fought Chewbacca and the two powerful Wookiees came to blows. After a violent skirmish, Krrsantan knocked Chewbacca out with brass knuckles. His victory, however, would be short lived – as C-3PO inadvertently electrocuted the outcast Wookiee and knocked him unconscious. After Krrsantan came to, the battle was over and Aphra had been taken captive by the rebels for questioning. Vader then tasked the bounty hunter with bringing Aphra back to him, as he suspected that she knew too much about Skywalker’s true identity as his son. Once Aphra escaped the prison on her own accord, Krrsantan tracked her down to a bar in the Outer Rims.

The weary archeologist attempted to bribe the Wookiee to let him go but the latter refused and brought her back to Vader’s flagship the Executor to collect the bounty.  After the Sith Lord ejected Aphra out the airlock as execution, Krrsantan rescued her for purely selfish reasons – as she still owed him both money and favor.

After healing in a bacta tank, Krrsantan accompanied Aphra’s crew on a series of quests and missions. These included searching for a Sith relic called the Sword of Kashyun and later obtaining the Rur crystal from an ancient Jedi temple.

To activate the Force-sensitive crystal, Aphra located Luke Skywalker but the two got into a bar brawl. The Wookiee intervened and brought the fledging Jedi onboard their ship the Ark Angel II. Skywalker, however, was unable to activate the crystal.

Consequently, the party travelled to Ktath’atn – where Aphra hoped that their Force-sensitive Queen would be able to activate the artifact. Aphra then presented Skywalker as a “gift” to the woman, who activated the Rur crystal. Unfortunately, the Queen revealed herself to be a parasitic entity which controlled the planet’s hive mind and infected Krrsantan. Ironically, the possessed Wookiee went on a violent rampage and destroyed the Queen’s minions before regaining his mind. Eventually, they  helped Skywalker in killing the Queen before partying ways with the Rur crystal in their possession.

Chaos Onboard the Sorca Retreat

Aphra hatched a plan to auction off the valuable artifact on the black market and also used the opportunity to lure the Xonti Brothers to attend. Onboard the Sorca Retreat space station, prominent figures from the criminal underworld gathered to bid on the Rur crystal.

Chaos erupted when a spirit within the crystal named the Eternal Rur took control of the deadly droids nearby, opening fire on the participants. The volatile situation was made more complicated with the arrival of Vader and a squad of stormtroopers.

Aphra managed to temporarily avoid the deadly skirmishes and helped Krrsantan trap the Xonti Brothers inside the hanger bay, preventing their escape. Krrsantan then caught up to the brothers and shot dead Kthoo-Ra – a gladiatorial bodyguard for the siblings. The vengeful Wookiee then captured the Xonti Brothers at last and took revenge by putting them through the same painful gladiatorial training he endured years earlier.

Around 3 ABY, Krrsantan worked with Aphra’s team once again, including helping her to uncover a plot by the propaganda minister to assassinate Emperor Palpatine and searching for the legendary Rings of Vaale.

While visiting a bar on Burnin Konn, the duo ran into a famous Trandoshan bounty hunter named Bossk. Aphra offended Bossk with a snide remark, and the angered bounty hunter responded by attacking Krrsantan. As the fisticuffs nearly turned deadly, Aphra defused the situation by offering the Trandoshan valuable information on the whereabouts of an enemy he was seeking. Towards the end of their partnership, Krrsantan took up a bounty on Aphra placed by the wealthy Lady Domina Tagge, head of the House and Corporation bearing the same name. In the end, he was unsuccessful, and the clever scientist eluded his capture.

Six years later, Krrsantan resurfaced on Tatooine after the death of Jabba the Hutt under the employment of the latter’s gangster cousins – known as “the Twins,” who sought to fill the power vacuum. Krrsantan acted as their enforcer, only to discover that unperturbed Boba Fett had laid claims to Jabba’s previous interests and territories. This set the stage for the dramatic events that was portrayed in the television series.

As most Star Wars fans have only seen Wookiees portrayed in a positive light from the original trilogies and events depicted from the Clone Wars era, it is a refreshing change to see one portrayed as a “villain.” Nonetheless, Black Krrsantan’s intimidating demeanour, brutal physicality and love for violence made him a worthy antagonist in The Book of Boba Fett.

By understanding Black Krrsantan’s backstory from the comic book series, viewers can arrive at a greater appreciation for his character development and impressive abilities. In a galaxy full of memorable heroes and villains, most would agree that Disney has done a great job at bringing this interesting character to life in a live-action series, with perhaps more appearances to come.