When the Phantom Menace, the first movie from the Prequel Trilogy came out, a whole new era for Star Wars began. For the first time, the fandom was divided and it has been ever since. Whether or not this movie is good or bad will be an eternal debate, but one thing is for certain: it enriched the Star Wars universe in many positive ways and introduced countless new characters, ships, and vehicles.

The LEGO Naboo Starfighter is one of the most iconic ships from the Phantom Menace and a favorite to many fans. Even so, it has appeared in only 5 sets throughout the two decades of LEGO Star Wars. It could be because it is a relatively simple starfighter that has very little interesting play features when made into a set or simply because it does not hit the sale numbers that LEGO desires.

Nevertheless, any hardcore fan should have this ship in their collection and today, we will discuss which of the six is the Best LEGO Star Wars Naboo Starfighter set.

The 7141 Naboo Fighter set was from the original LEGO Star Wars line in 1999. As you can expect from a LEGO set from this early period, it cannot compare to the later versions that we will discuss later. Nevertheless, it is extremely valuable for collectors and always good to have in your collection if you manage to find it at a decent price.

Like all sets from the original line and the first years of the LEGO Star Wars theme, the box and overall packaging was flimsy and relatively cheap. This makes it even harder to find this set in good shape nowadays as the boxes from this period were very prone to damage.

The minifigures in this set were relatively simple which means there is not much to say about them. The young Anakin Skywalker minifigure is particularly valuable nowadays as it had regular-sized legs. Short legs were only introduced by LEGO in 2002 which makes this minifigure more collectable.

The Naboo fighter itself suffered the same fate as most Prequel Trilogy sets from this period – the undeveloped technology and the use of larger LEGO bricks at this time made it hard to create accurate designs of the ships and vehicles. 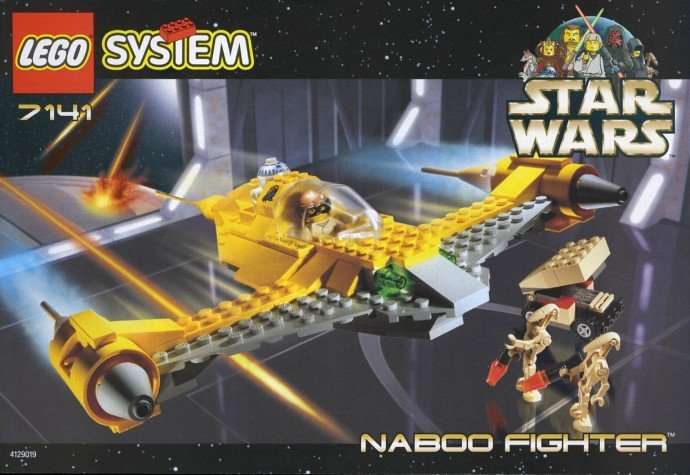 The Naboo Starfighter was one of the first-ever UCS sets to be released and it came out in 2002. As you can clearly see, it is quite different from the majority of UCS sets that have been released since.  It is not large-scale but pretty much the size of a regular set.

Simultaneously, the price for this one was two times higher without a single minifigure included if we put the R2-D2 dome aside. The only reason behind this inflation was the chrome silver parts that covered a large portion of the ship. However, I do not feel like this was fairly priced and consider this as one of the most disappointing UCS sets to ever be released. 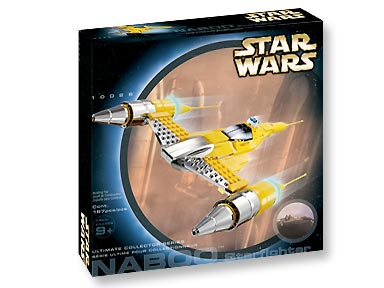 You can already see that it took 8 years for LEGO to re-make the original Naboo Fighter set just by looking at the set details below. We did get the so-called UCS version but that does not count.

Perhaps one of the reasons was the prolonged period of negativity towards The Phantom Menace that followed the release of the movie. After all, the original LEGO Star Wars line in 1999 was released before the movie came out and people were, of course, excited about the upcoming release.

The design of the second Naboo Starfighter was definitely on point in terms of movie accuracy and it had a much more sleek design if compared to 7141 version. It included some fun play features such as a spring-loaded launcher at the bottom of the ship and a trap door for the droid to drop out.

The set also included a smaller model of the Vulture-Droid Class Starfighter which was used by the Trade Federation. Overall, I believe this set was great for its time and was a great purchase for its price. It is not as collectible as the original 1999 version but would still make a great addition to your collection. 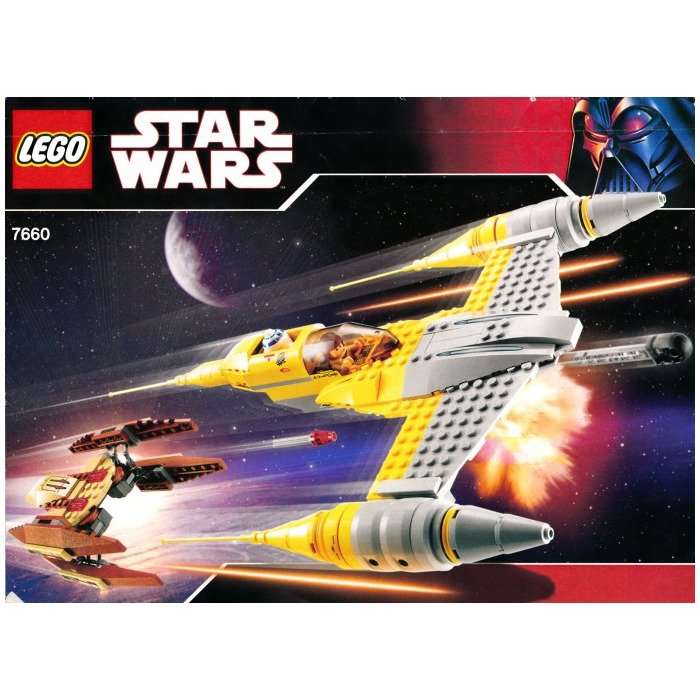 Many of the 2011 LEGO Star Wars sets were direct remakes of older versions from the 2007 line and the Naboo Starfighter was one of the better examples. While we lost the Vulture-Droid Class Starfighter, we did get a variety of minifigures which, unfortunately, also inflated the price to almost double.

The minifigures were great, nevertheless. The battle droids with the dark red and tan printing looked quite cool and the Droideka was a great addition, even though LEGO does not officially count it as a minifigure. The young Anakin Skywalker came with new printing and a brand new second facial expression while the fan-favorite R2-D2 had a brand new top piece that looked far more realistic.

The ship itself had a simple but sleek design with few minor changes. Unfortunately, LEGO decided to change the spring-loaded launchers with flick-fire missiles which most people dislike even today. For the first time in a Naboo Starfighter set, we got an opening cockpit and not one that had to be removed entirely to open.

Overall, this third version of this set definitely had the most accurate design but does look like the wings are slightly oversized. Nevertheless, the front of the ship had a much smoother look than the two previous versions. The price did seem a little bit high for this small set even with the addition of such great minifigures. However, when you compare it to today’s prices, it is rather worth the money, right? 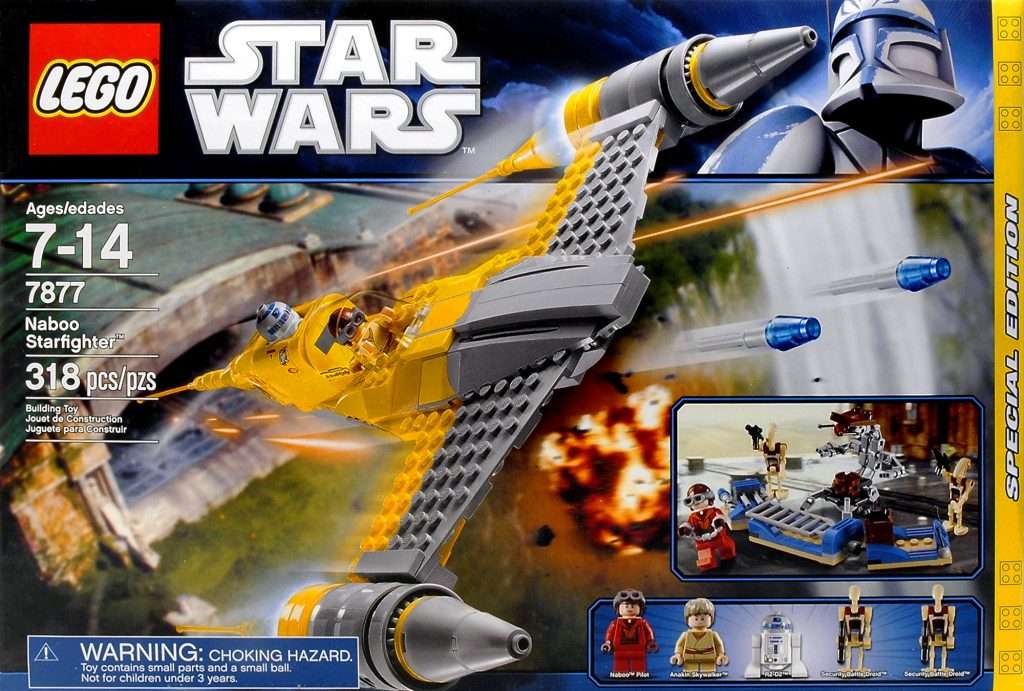 The latest Naboo Starfighter Set was released in 2015 and was definitely a huge improvement when put next to the previous versions. Overall, this set included almost everything you need to recreate this part of the movie thanks to the large minifigure selection – Young Anakin Skywalker, Obi-Wan Kenobi and a bunch of battle droids and Droidekas.

Besides the Naboo Starfighter and all the minifigures, we also got many other additions that helped develop the scene – a ladder, a crate, a small speeder-like thing that comes with a bunch of missiles included, and a fuelling station. Last but not least, there was also a good-looking stand for the Naboo Starfighter.

The ship itself definitely had the best design out of all the five versions and for the first time, I would say, it looked perfectly-sized and movie accurate. One thing I would change would be the stickers, they could have been printed pieces but nevertheless, the Starfighter is a great build and an even better display model. 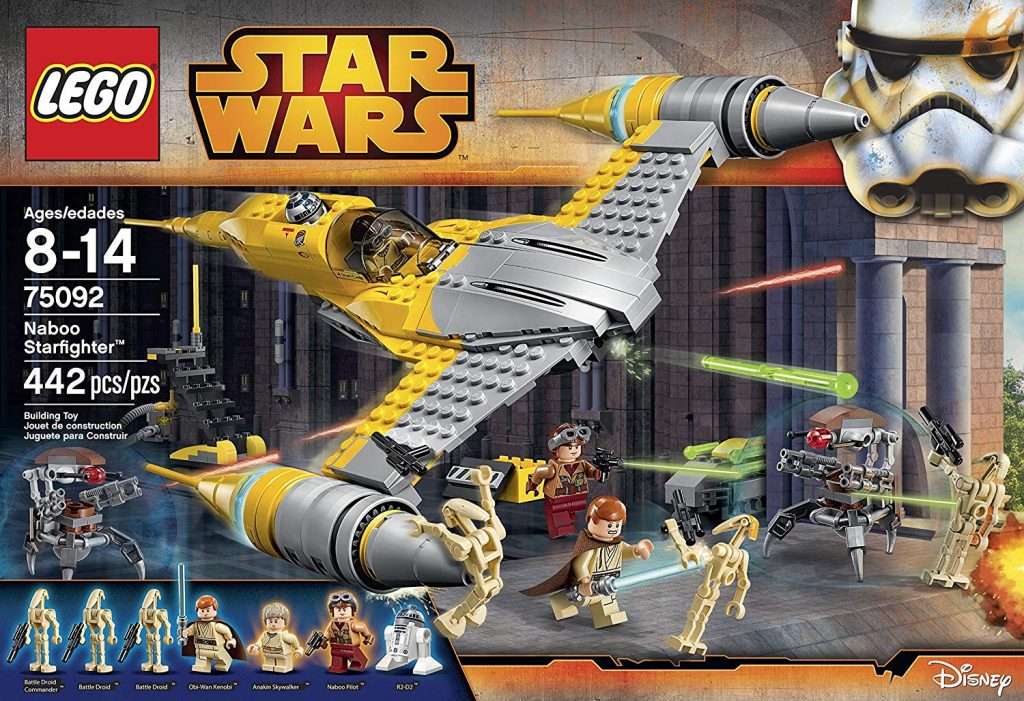 Which is the Best LEGO Naboo Starfighter?

Many ships and vehicles from the Star Wars Universe receive remakes every two or three years but the Naboo Starfighter is definitely not one of them. We have only seen five sets with this ship and fortunately, every new version is better than the last.

With this said, the 2015 Naboo Starfighter (75092) version definitely stands out in my opinion and I think you should definitely consider getting one before the prices rise on the secondary market. Nevertheless, if you get a chance to buy one of the earlier versions that have a higher value in terms of collectability at a good price, you definitely shouldn’t hesitate.