Star Wars Rebels is an animated Star Wars show that follows the adventures of the crew of the Ghost. LEGO has created many sets based on this iconic cartoon, and we will cover them in order of release. Fans of the animated TV series Star Wars Rebels will no doubt love to collect them all!

This was the first-ever Rebels LEGO set released. The Phantom is the starfighter that can be docked into the Ghost, and just like in the series, this set will attach to the back of the Ghost set. You get Ezra Bridger and Chopper minifigures, and the former has a blaster and Stormtrooper helmet included.

The bricks make up a simple but accurate reproduction of the small starfighter. Ezra’s minifigure fits perfectly in the cockpit and there is a slot for Chopper to sit in.  As the first set for Rebels, it has room for improvement but remains an essential set for collectors. 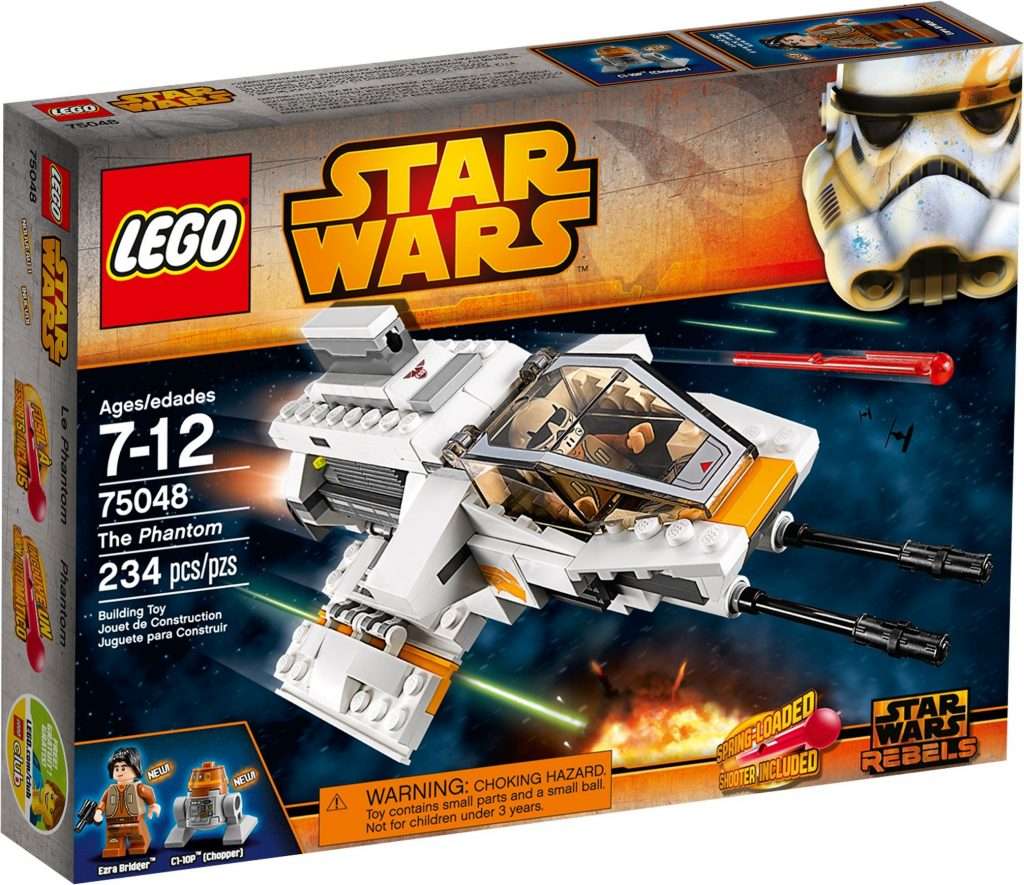 The mothership and mobile base of the main cast of Rebels, the Ghost is larger and comes with more minifigures. These include Kanan Jarrus, Hera Syndulla, Zeb Orrelios, and a Rebels Stormtrooper. What makes this set attractive is that the some fo the figures are exclusive, especially Zeb’s minifigure which is now worth a lot of money on the secondary market.

The Ghost has many moving parts and is a perfect copy of what fans have seen throughout the series. There are even two shooters that fire green missiles a good distance. The Phantom set can fit neatly at the rear of the mothership. As there are many functions and details, this set will undoubtedly keep any fan entertained for a while. 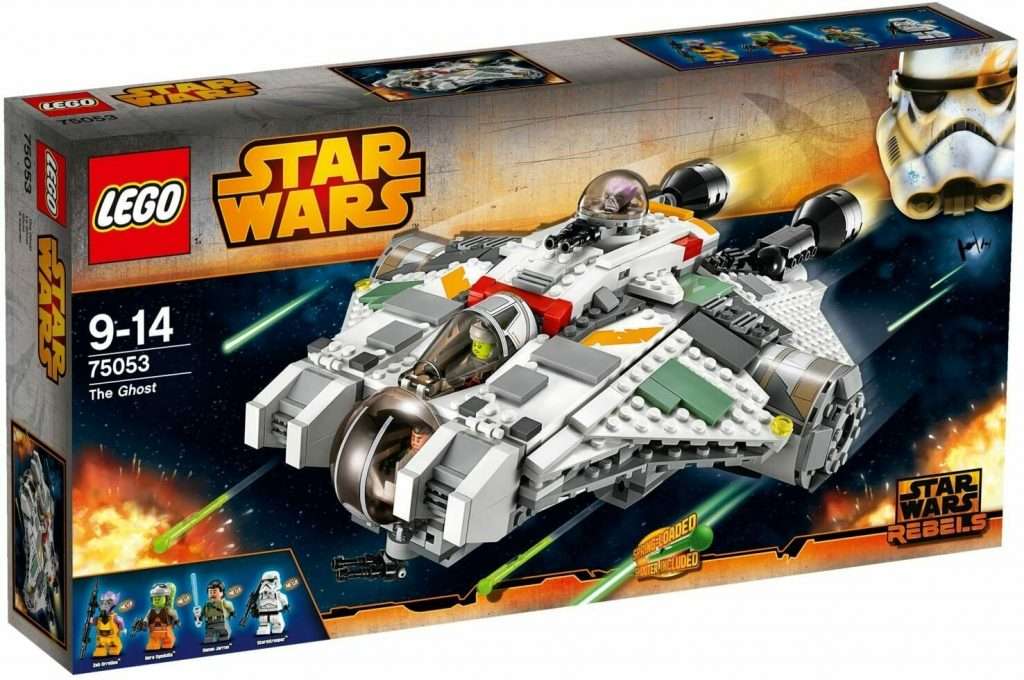 This is a battle pack for the Star Wars Rebels series, perfect if you want to recreate any of the larger scenes requiring more Stormtroopers. Other than the troop transport, the set comes with four Stormtroopers and their blasters.

The troop transport is smaller but works well for keeping all four troopers on board. It also has all the necessary details such as a rotating cannon. The Stormtroopers come with stud-shooting blasters which allow you to play more realistically. Any fan who wants more Stormtroopers from the iconic series would love this set. 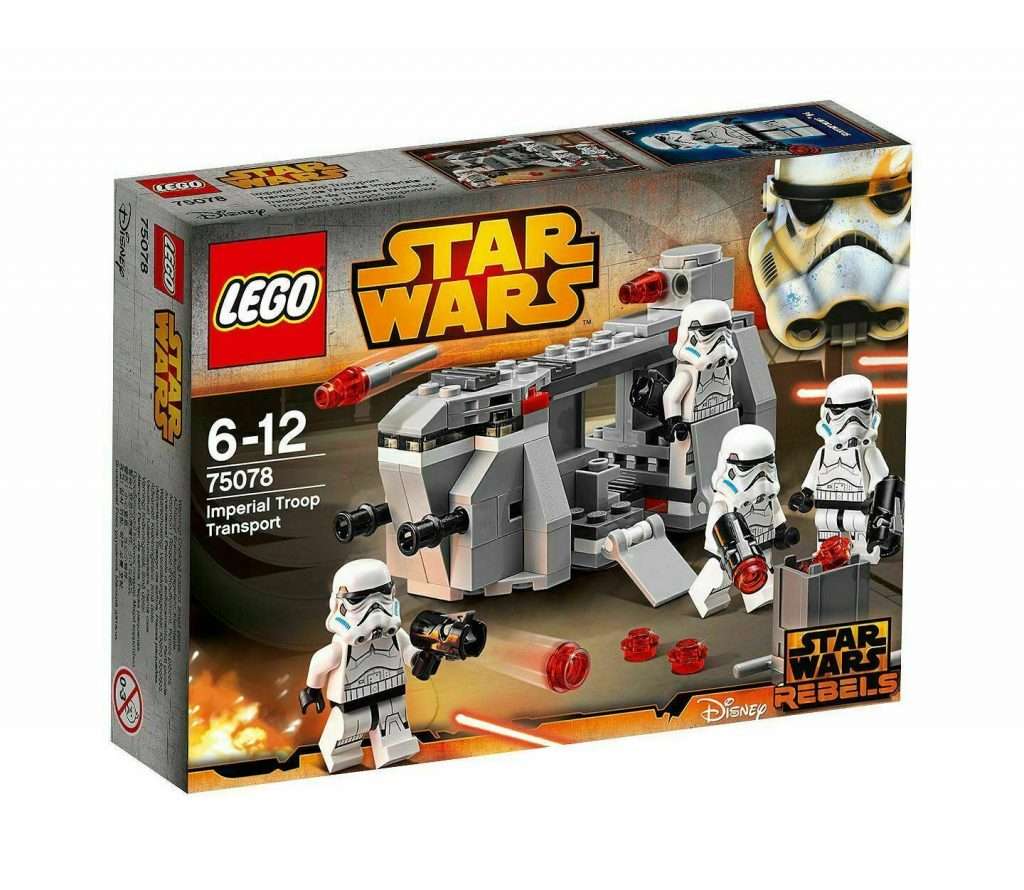 This prototype starfighter is what would eventually become Darth Vader’s personal TIE fighter, but for now, the Grand Inquisitor owns this particular craft. He is accompanied by a TIE Advanced pilot and Imperial Officer. The prototype is very attractive and instantly recognisable to fans. It is also a similar build to many of the other LEGO TIE Fighters we have seen.

The starfighter is easy to build due to its symmetry and comes with two shooters. The folding wings are also accurate to the series appearance. The officer’s minifigure comes with a unique hat of his own, and the Grand Inquisitor looks very menacing. Fans would love to expand their collection with this set. 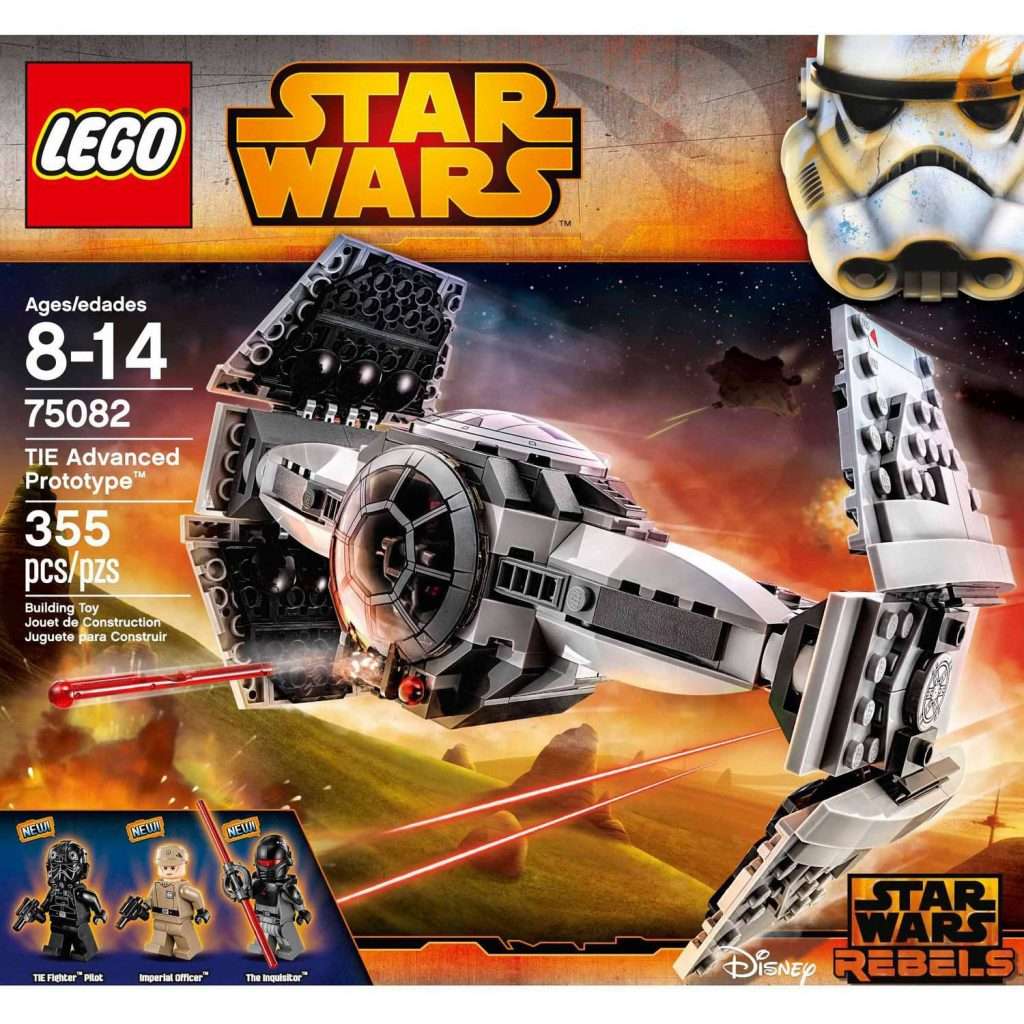 Agent Kallus is seen in the series pursuing the rebels with an AT-DP, and this set is designed to replicate that scene. All the minifigures are excellent and unique other than the standard Stormtrooper from the series. The walker also has a shooter which is fun!

The most popular figure in this set is Agent Kallus, as LEGO did an excellent job replicating him in this form. He carries his signature Lasan-Bo Rifle, which is just two blasters connected with a lightsaber hilt. The two AT-DP pilots also have interesting armour. The walker itself is a faithful reproduction and looks like the original. 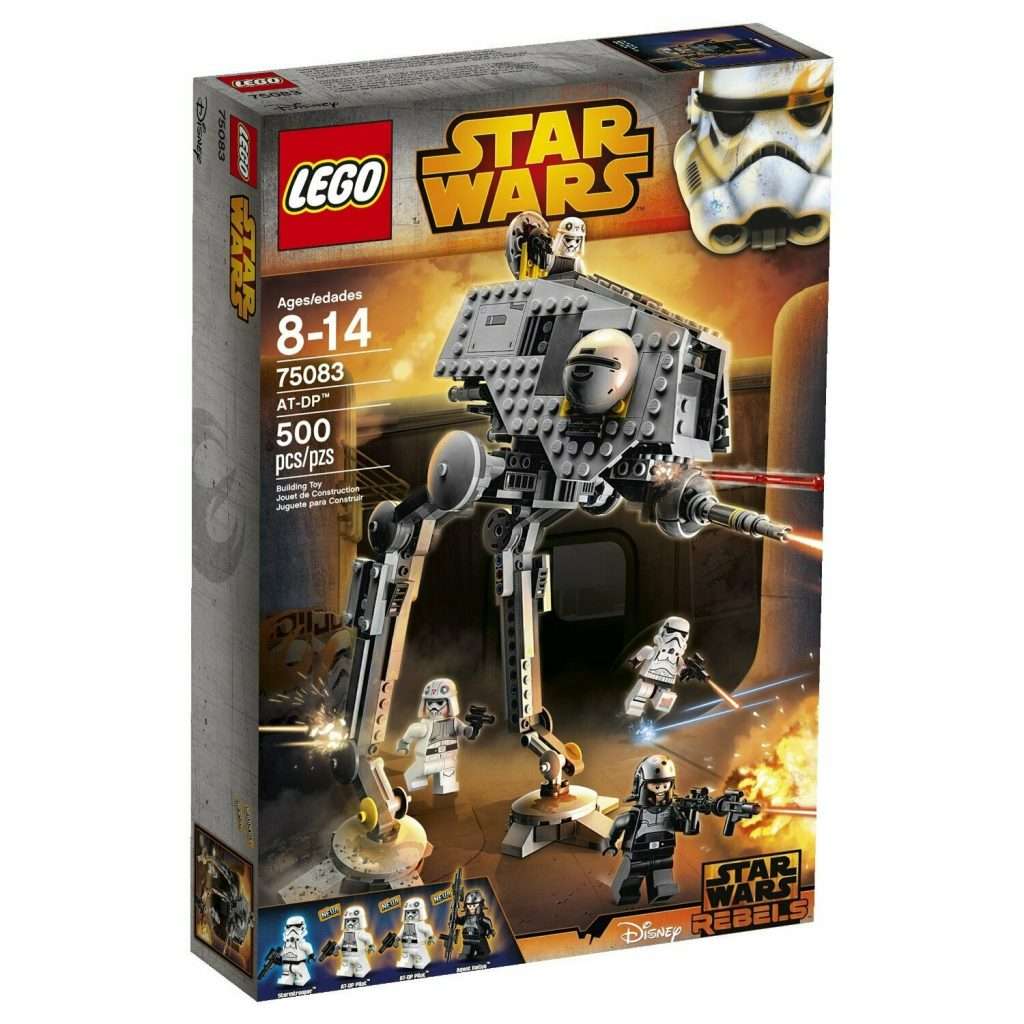 This set is a little more obscure but has great build quality and content. Of particular note are the Wookiees and Kanan Jarrus minifigures, especially their designs and equipment. Wullffwarro’s minifigure has a darker color and is armed with a Bowcaster. The other Wookiees have old LEGO muskets that pirate sets used to come with. The bricks comprising the gunship itself are chosen to accurately resemble the original.

The gunship’s design is never seen elsewhere and building it isn’t too hard. This is apparent in its rare color scheme. While this set does have many stickers, the build quality is excellent and it’s worth picking up for the rest of the contents. 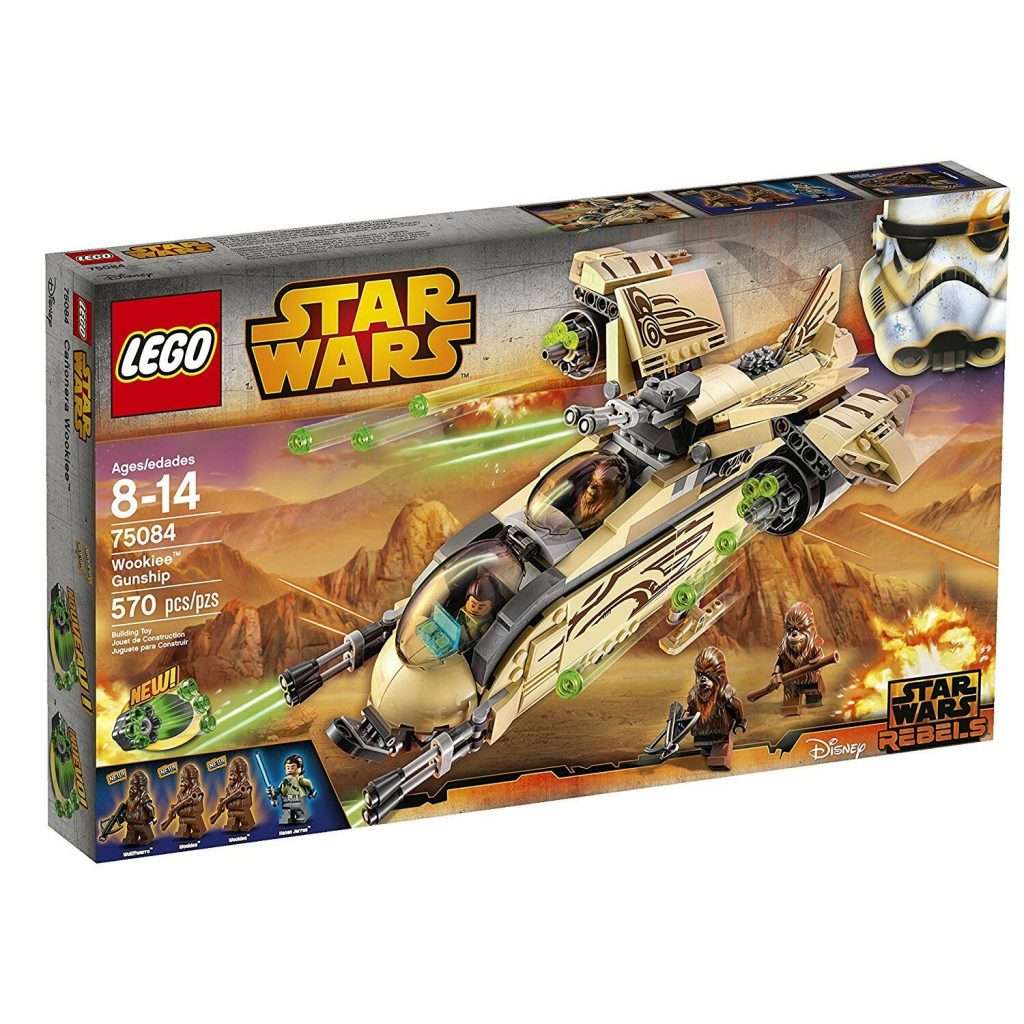 You can relive Ezra’s adventures riding his speeder bike in this set as he outruns the Imperial forces. Sabine Wren finally makes an appearance in a LEGO Rebels set, and both are accompanied by a Stormtrooper. While both speeder bikes are the same design, Ezra’s features a custom paint job.

These speeders might be a little larger in scale, but they are very accurate to the original look. Any fan can instantly tell that they are the same speeders Imperial forces on Lothal ride. As Sabine is available, many collectors undoubtedly want to complete the Ghost crew. 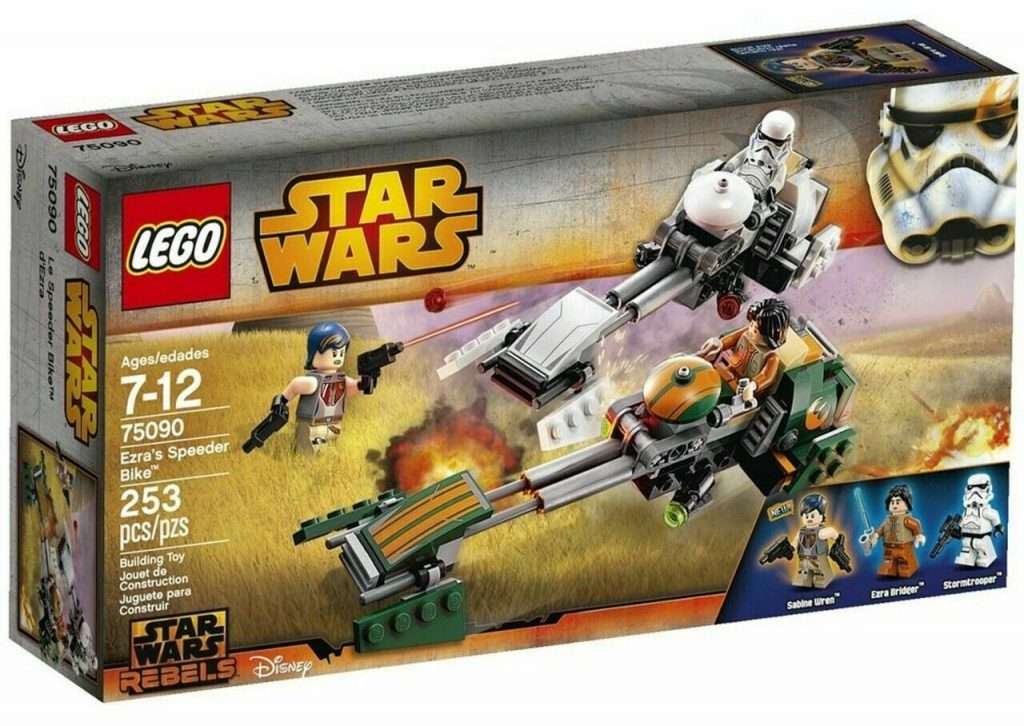 Other than being seen in Chapter 11: The Heiress of The Mandalorian, this starship appears in the Rebels cartoon. Of note is that Sabine is back again, but this time her Mandalorian helmet is an option when the previous set didn’t have it. Agent Kallus also has a hairpiece instead of his helmet. The assault carrier itself is a work of art and extremely accurate to the cartoon series.

The assault carrier has a few TIE Fighters underslung, and with the use of a hidden axle at the back, you can deploy them one by one. This works exactly like in the media appearance and is a nice touch. Sadly this set is considered underrated and did not garner much attention, but now collectors are aware of how valuable it is. 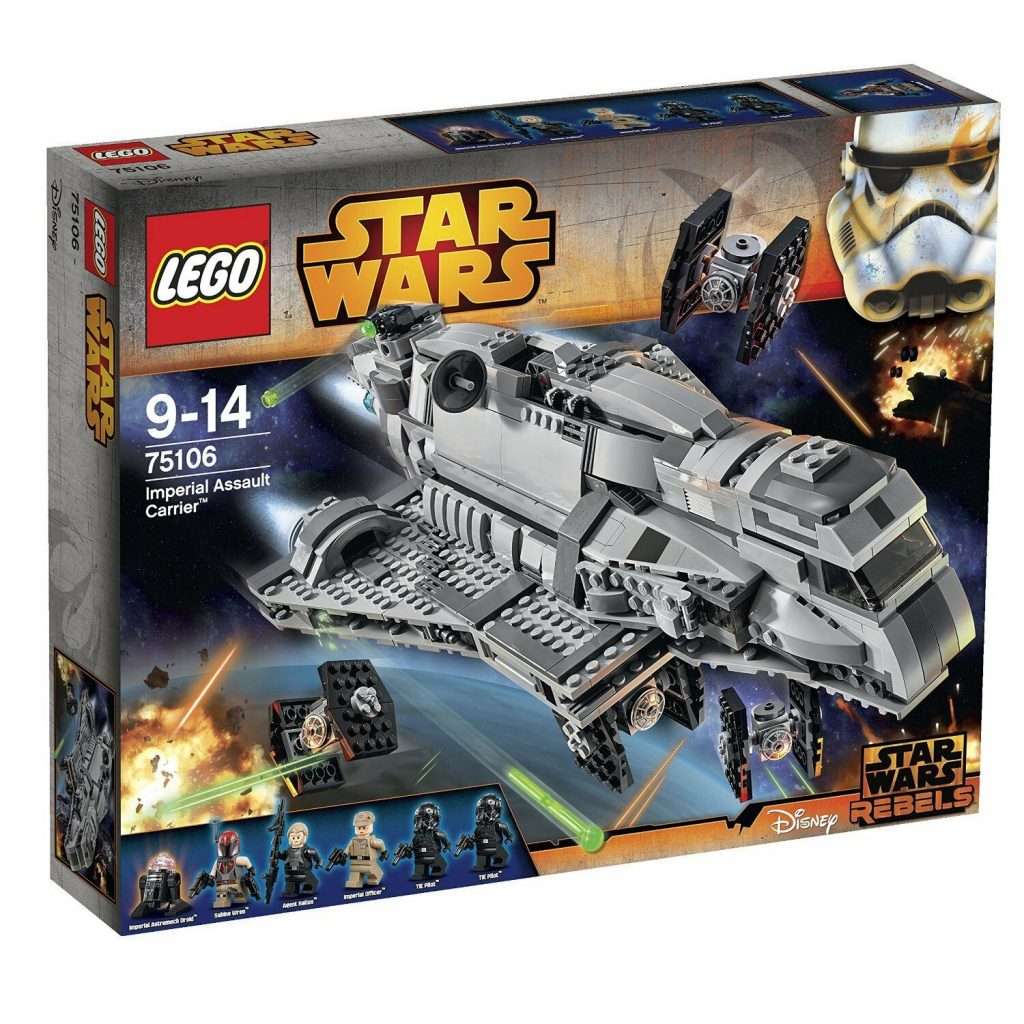 The amount of detail in this LEGO set is astounding considering its smaller size. While the bike itself is a little larger than it should be, it looks very cool. This set also has a newer model of Kanan with darker skin. A minifigure exclusive to this set is the Imperial Combat Driver, and this one looks just like the real thing.

Kanan’s speeder bike is based on a scene from the first season, and the details on it are amazingly executed. The two munitions boxes it can carry around contain weapons and explosives. This set is remarkable and collectors will like it. 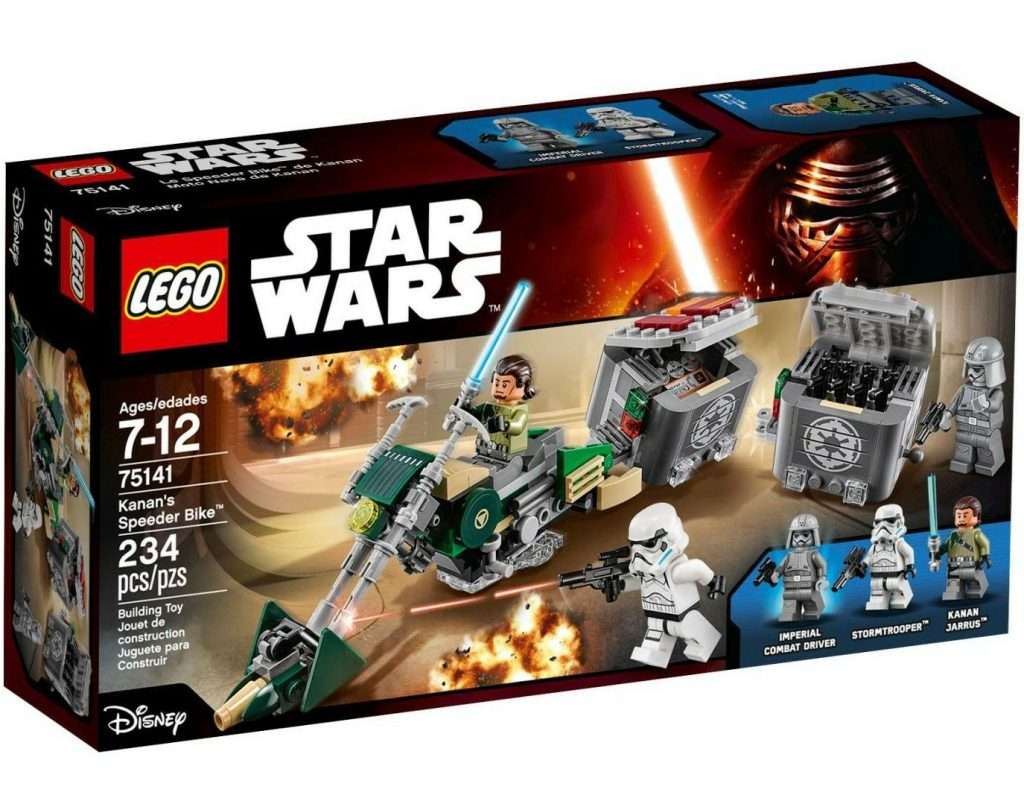 Two ships in one? Why not? This LEGO set offers something special for everyone to enjoy. Sabine gets her Season 2 design and you also get Darth Vader. Of course, the two ships have excellent details.

The LEGO A-Wing comes with a different colour scheme than what fans are used to, but it works well as a LEGO build. Darth Vader’s TIE Advanced Fighter is considerably more detailed than the prototype too. It’s hard to pass this set up due to how much you get! 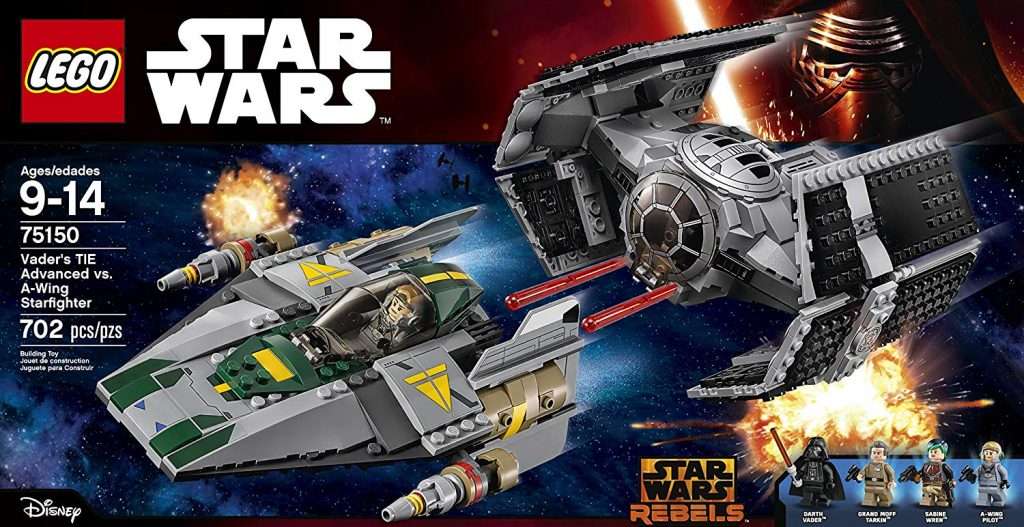 If you loved the older clone commanders then this set will make your day! Captain Rex, Commander Gregor, and Commander Wolffe are now elderly soldiers but their minifigures make them look sharp. The AT-TE is heavily modified and looks exactly how it is in the cartoon.

In this set, you also get the Fifth Brother Inquisitor and a Stormtrooper, just like in the series. What makes the walker impressive is how it looks inside. You’d think you jumped into the cartoon with how accurately all the features are replicated. 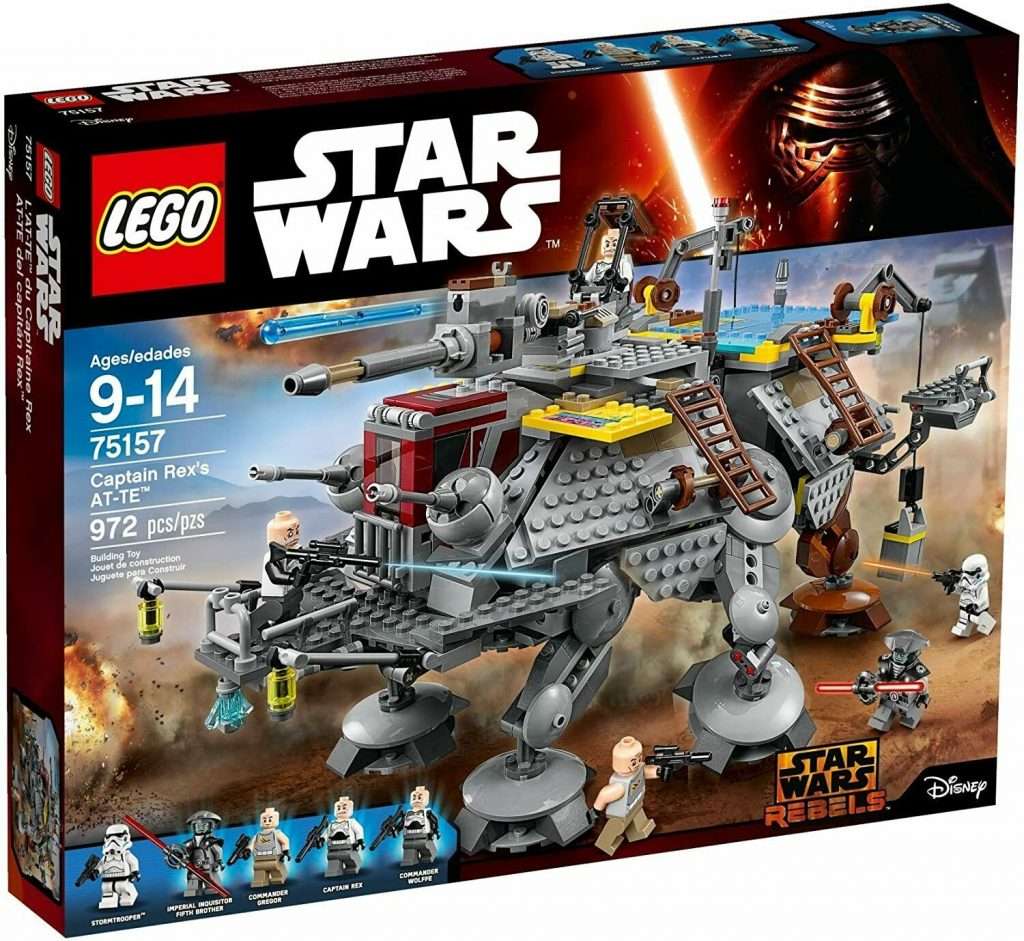 With this set comes Ahsoka Tano’s older self, along with two lightsabers with unique hilts. The main attraction is the combat frigate, scaled down to a reasonable size. It has spring-loaded shooters like other starship sets. The other unique minifigure is Commander Jun Sato, with all the other minifigures appearing in other sets.

This set is simpler than many other builds but if you want to complete your collection and especially obtain Ahsoka’s minifigure, it’s a good choice. The frigate is impressive on a shelf and you can still get backup minifigures. 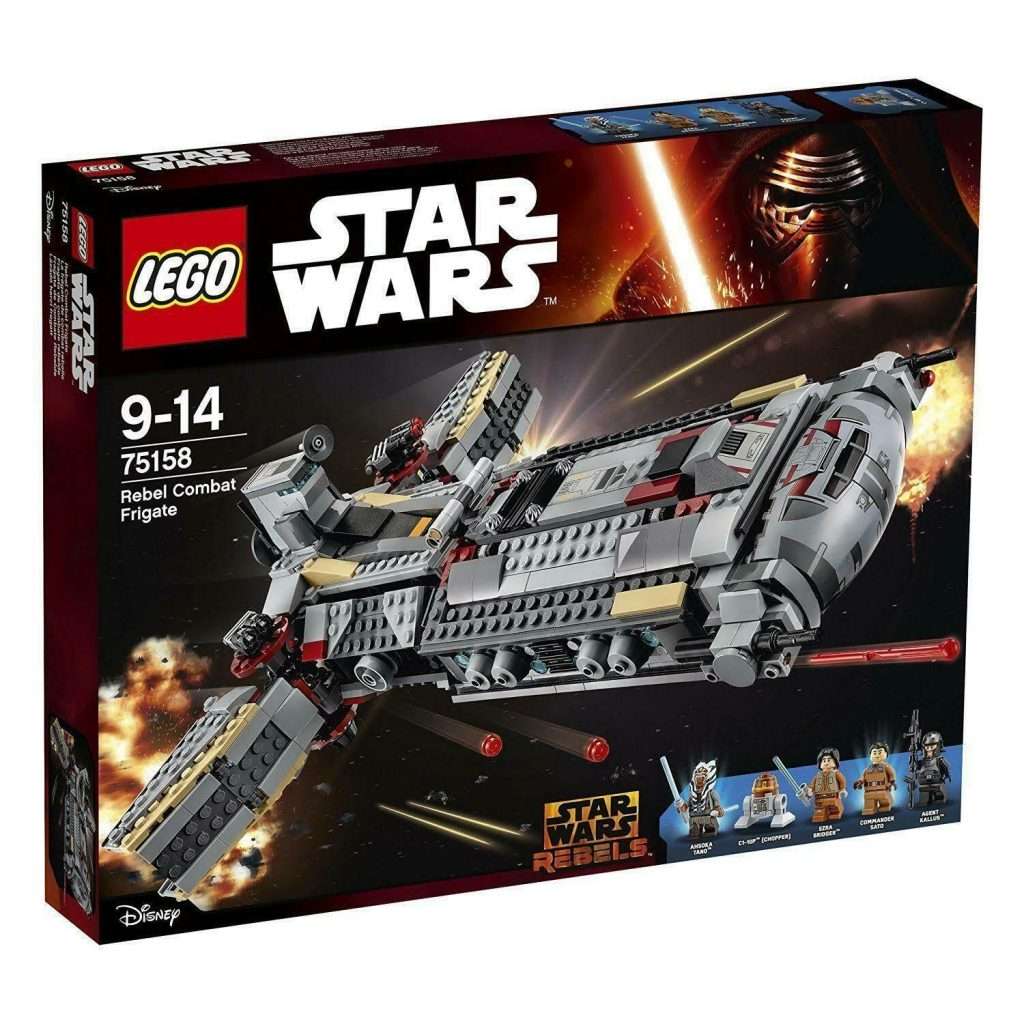 Another one? Well, this set is different. Not only is the starfighter itself updated, but you get Kanan’s post-blinded appearance and Grand Admiral Thrawn. This particular Phantom is a replacement of the first one after it was destroyed. The accuracy of the build is wonderful to admire after construction.

Unfortunately, this minifigure of Thrawn is based on concept art and features the wrong rank bars. On the flip side, once a replacement set is sold these old ones might be sought after. Interestingly, this new set fits the old Ghost build perfectly, something LEGO did not forget. Even with the mistakes, this set is still a great one to get. 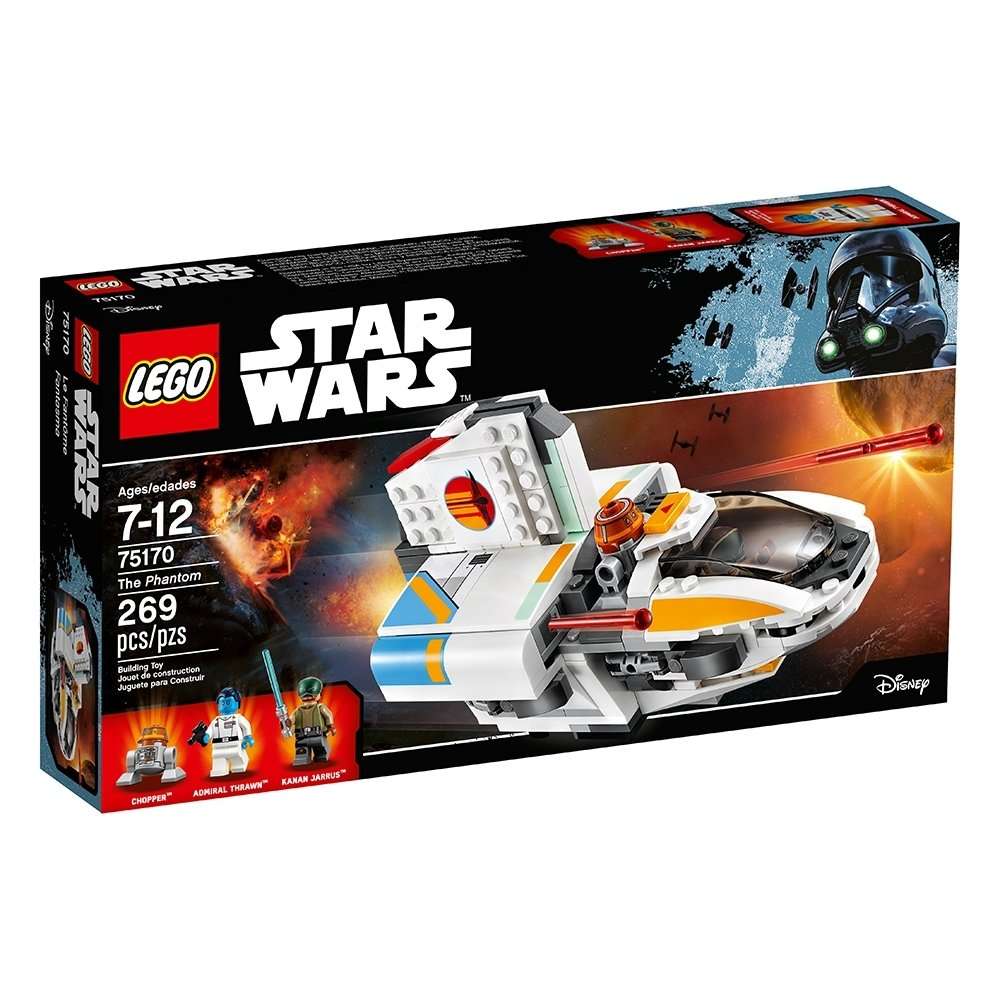 As you can see there are plenty of very good LEGO sets based the animated TV show Rebels. Which is your favorite? If you have any thoughts, let us know in the comment section.