The wildly popular show The Mandalorian has been setting the Star Wars world on fire, and LEGO Star Wars can’t go without releasing sets based on this wonderful universe. Even if there aren’t many sets based on the Disney+ show out yet, more of them are sure to be in production considering the show is an incredible success. Today, we’ll be taking a look at all the LEGO sets from The Mandalorian TV show.

This highly accurate LEGO model of the AT-ST Raider as it appears in the show is great for kids around 8 years. With 540 bricks, the set comes with the AT-ST, 4 minifigures, weapons for said minifigures, and 2 shooters. The included brick separator will help dissemble stubborn bricks.

Not only is the LEGO AT-ST posable, but its legs are fully jointed and the cockpit can hold one minifigure. The Mandalorian, Cara Dune, and 2 Klatooinian Raiders will be great to pair with your other LEGO sets as well.

One of the most attractive parts of this set is the detail even inside the AT-ST, which allows one minifigure to sit inside. The shooters are also a great way to renact the moments in the show. With easy construction, you’ll be sure to enjoy this set. 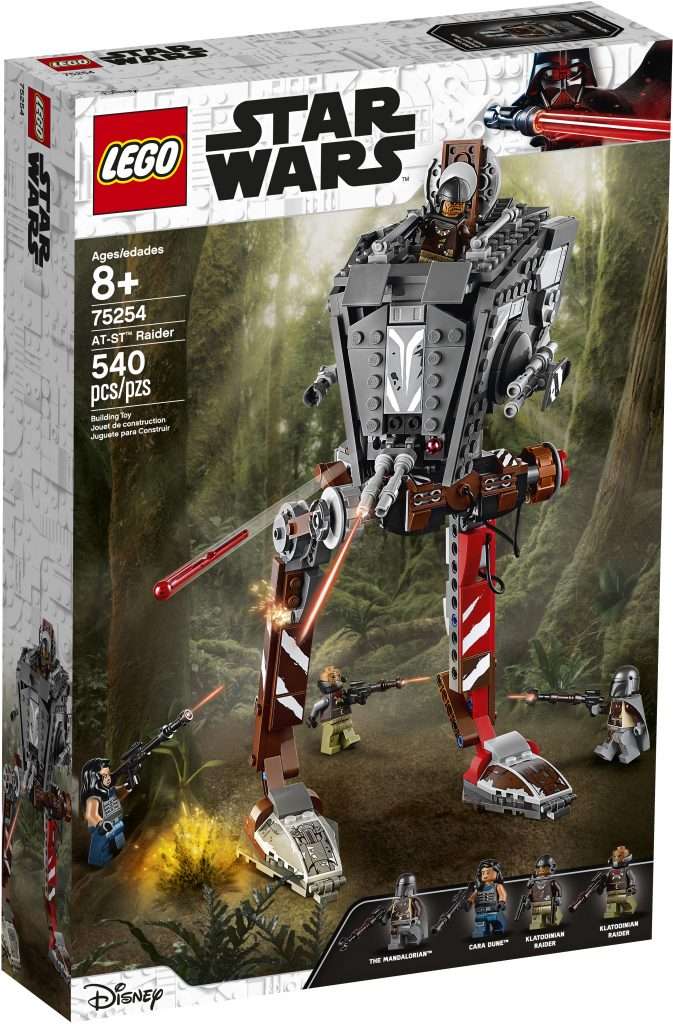 This is the most affordable LEGO set from the Mandalorian TV show, and by getting more than one, you can create your own Mandalorian army.  This LEGO Star Wars battle pack comes with 102 pieces. The main parts are the 4 detailed minifigures, a defence fort, shooting blasters, and a speeder bike with stud shooters.

Combine this LEGO set with another one like it or with the other sets for new stories and fresh adventures. Since this set is rated for kids above 6, putting everything together isn’t hard at all. The minifigures are very close to the original as well.

Being an affordable and yet versatile set, you can get one for your kids, yourself, or as a gift to a Star Wars fan that loves LEGO sets. Integrating these bricks and pieces with others is very easy, and you might end up recreating scenes with more detail. Easily assemble the pieces and put them on a shelf for display! 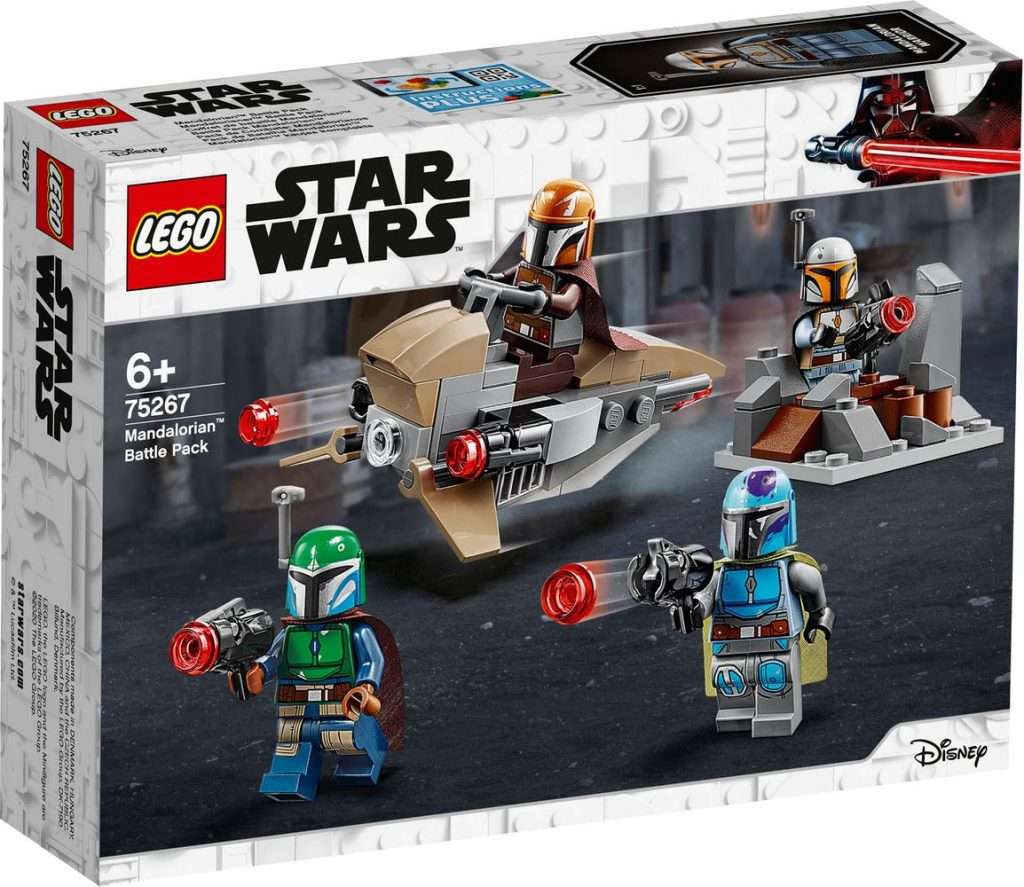 The Mandalorian calls this ship his home, and after assembling this set, it’s possible to reimagine the scenes again. There are many features both inside and out, including the cockpits and cargo hold’s attention to detail. Made for kids 10 years and up, this set is a little harder to put together than some others.

Regardless, LEGO did a great job recreating this iconic ship in LEGO form. The shooters help kids immerse themselves, and the 4 minifigures include The Mandalorian, The Child, Greef Karga, a Scout Trooper, and an extra IG-11. All of them resemble their TV show counterparts.

There are 1023 pieces in this set, which does take some time and effort to put them together. It would be best to stick to the recommended age limit, given the complexity of The Razor Crest’s layout and details.

Get this set for a loved one for the holidays or as a birthday gift, and you’ll find it will keep them occupied for many hours. Even as a display piece it works well and will be sure to spark conversation. After all, the detail is its main selling point.

This set is a LEGO Star Wars imagination of the Tatooine scene straight from the first episode of season 2, though it’s set for release in January 2021.

Made for children above 7 years old, it has 276 pieces, and this makes it relatively easy to construct. There are minifigures for The Mandalorian, The Child, and a Tusken Raider, and weapons are provided to allow for accurate depictions. A speeder and Tusken hideout are also included, which provide the setting for the scene.

The speeder has a saddlebag for The Child to sit in, just like in the TV show, and the hideout has a functional ballista to let the Tusken Raider defend his base. This set is currently the cheapest way to get The Child minfigure. 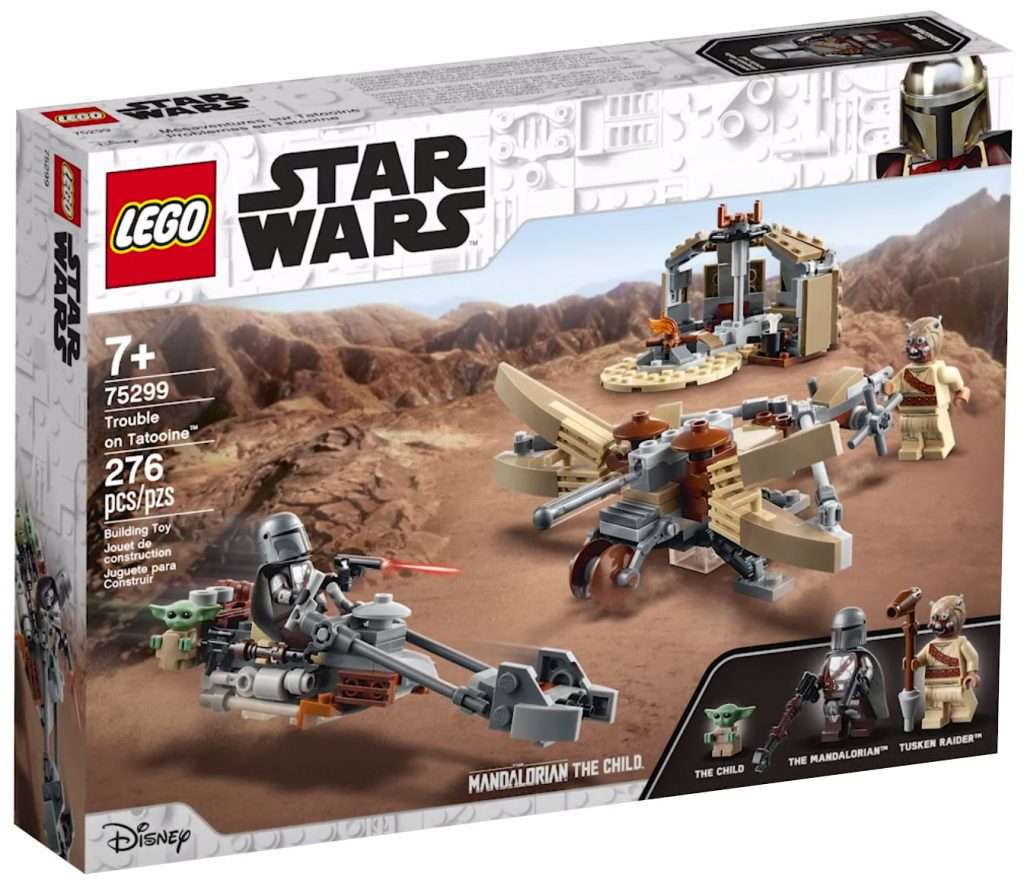 Unlike the other sets we covered above, this LEGO BrickHeadz set is made solely for display purposes. It also has a different style, being much blockier and less realistically-shaped than the regular figures. It’s great for kids more than 10 years old, which means that assembly and construction are going to need some more detail.

The Mandalorian figure has his weapons on him, rifle clipped to his back and pistol in hand. The Child will be ‘floating’ in his pram on transparent elements.  Both figures will also come with baseplates to help with displaying them.

Whether you’re a new fan or seasoned veteran, this is a great addition to your collection! The figures are quite expressive, and the cuteness is great for something different. This set is perfect as a gift too. 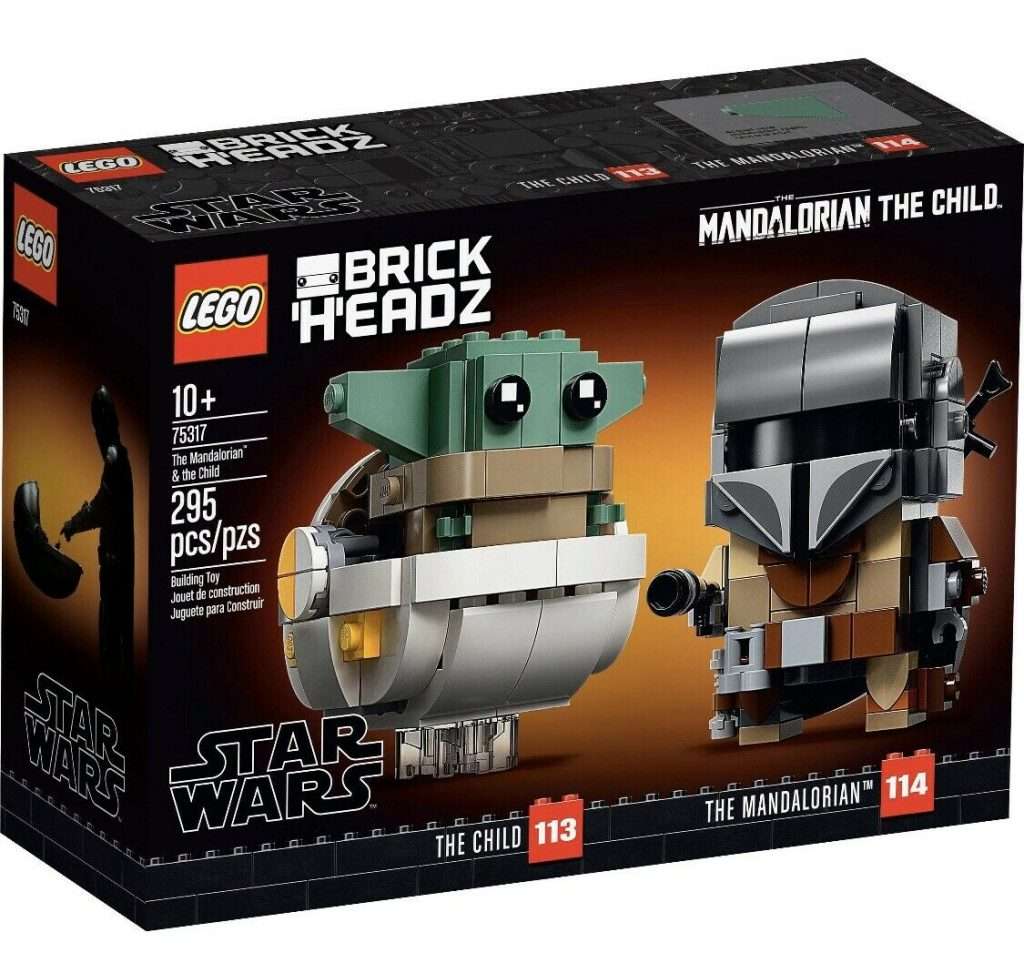 Finally, we have The Child buildable figure set, which is the most detailed set of all six of The Mandalorian sets available. The rating is 10 and above, though it will be harder than the other 10+ age sets we have covered so far. The amazing attention to detail compensates for this, however.

With a whopping 1073 pieces, construction is going to take more than a while. The result is still worth it to any Star Wars fan since this very lifelike model is complete with an adjustable head, moveable ears, and a mouth you can move for different facial expressions. You can also place The Child’s favourite gearshift knob in its hands.

This premium LEGO Star Wars set will make any fan happy, and as a great display piece, putting it on the shelf will make any room look cool. The Child (also known as Baby Yoda or by his actual name Grogu) is a beloved figure, and even people who don’t watch The Mandalorian will recognise it. The time needed for construction might be longer, but in the end, the detail is worth spending time to admire. 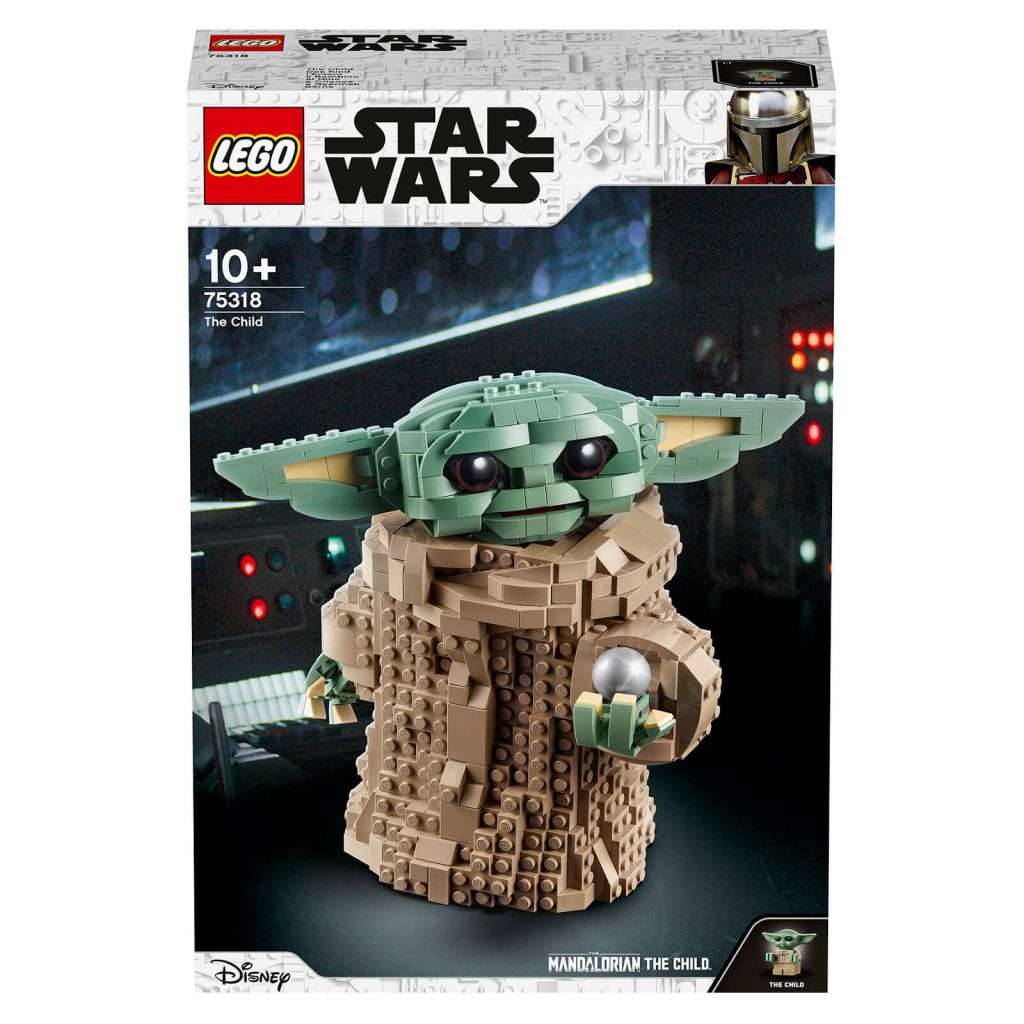 Bring your stormtroopers into battle with this LEGO Star Wars Imperial Armoured Marauder. In the world of Star Wars, the ship is an armoured transport vehicle. This set comes with its own tiny army of 2 stormtroopers and a new for August 2021 Artillery Stormtrooper. It also includes a Greef Karga minifigure.

This box shaped vehicle has many features authentic to the Star Wars universe. There are 2 stud shooters at the front and a rotating rear turret with 2 stud shooters. The cabin is easy to access and has enough room for two minifigures. There is also a lookout point and ammo storage. A minifigure can sit in the rotating turret, and there are slide and front access doors to send your Stormtroopers into battle as quickly as possible.

This would be a great set to combine with other LEGO Star Wars builds to hold full-scale battles in the comfort of your home. Its first appearance was in The Mandalorian Season 2, “Chapter 12: The Seige”. In the Star Wars universe, it can go for a hefty price on the black market. 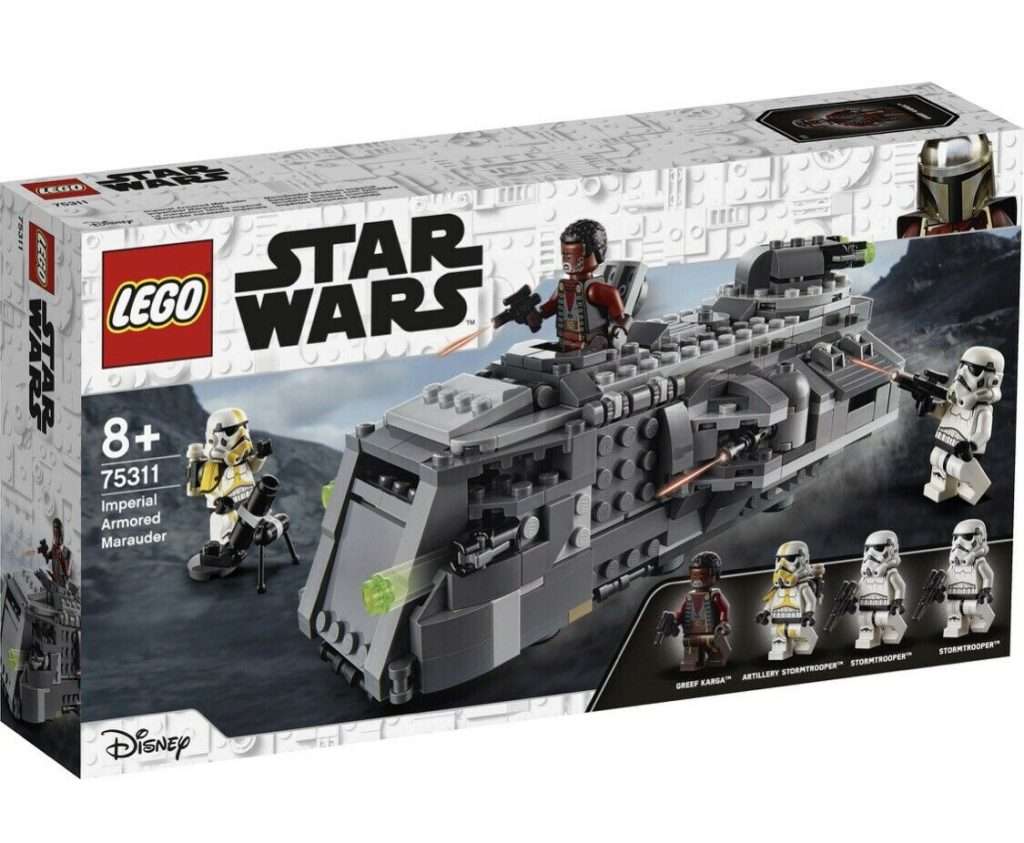 No LEGO Star Wars collection is complete without Boba Fett. Ride along with the legendary bounty hunter in his personal starship. The starship is built-in Boba Fett’s iconic colours of green and red and flies in an upright position. If you wanted to display the ship, the set includes a transport vehicle that doubles as a stand to hold the ship in its flight position.

Despite the set’s small size, as with all Slave 1 LEGO sets, there are still plenty of features to include open-ended play and imagination. There are two minifigures, including Boba Fett of course but also the Mandalorian. Boba Fett comes with a blaster, while the Mandalorian comes with a blaster and spear. There is also a Carbonite brick that fits in a built-in storage compartment in the ship. There is a handle built into the back of the ship to allow for easy flying, rotating wings, 2 stud shooters, and 2 rotating duel blaster cannons. Boba Fett is able to sit either in the transporter or in the opening cockpit.

With the upcoming release of The Book of Boba Fett, this is the perfect set for fans and collectors alike. 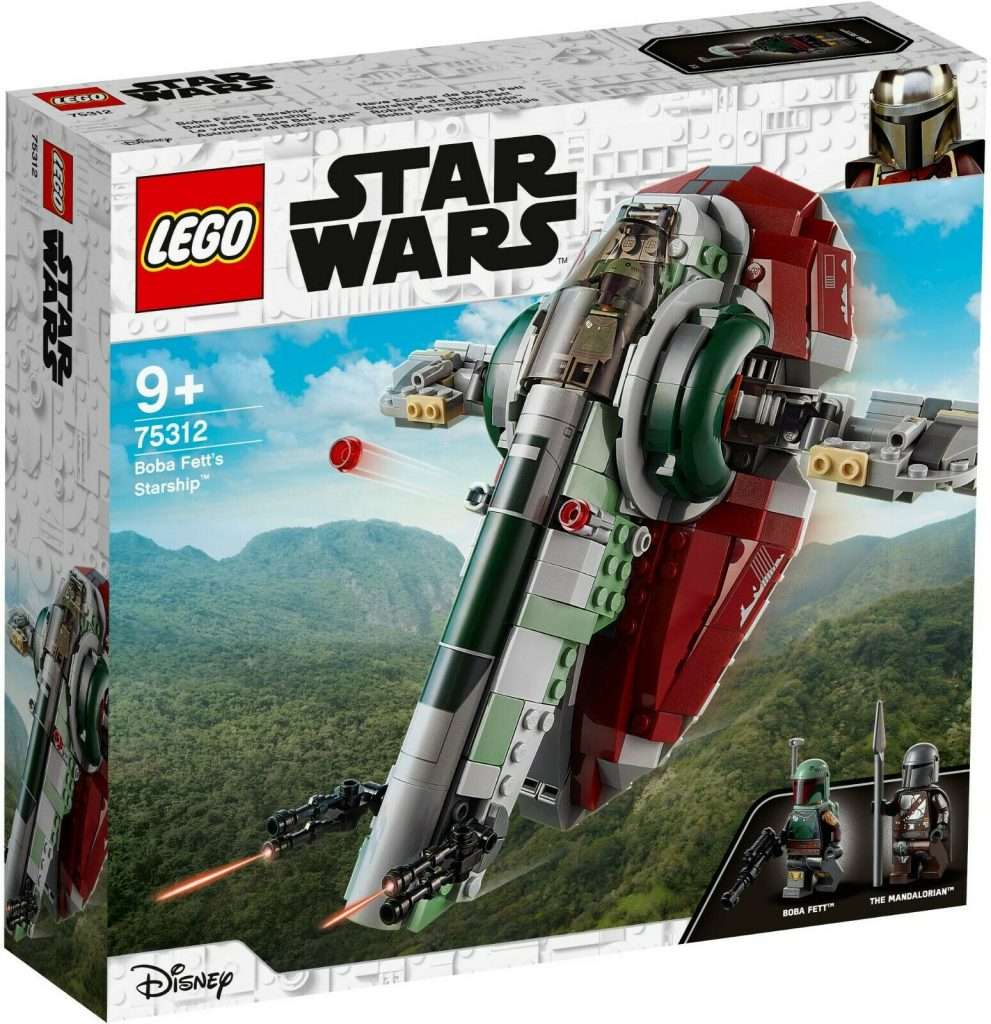 It’s time to rescue the foundling Grogu (Baby Yoda) from Moff Gideon’s ship, the Imperial Light Cruiser. This sleek and angular ship contains a plethora of weapons and accessories, as well as five mini-figures. Minifigures include The Mandalorian, Cara Dune, Fennec Shand, Moff Gideon, and a new for August 2021 Dark Trooper. There is also a LEGO figure of Grogu.

The ship is packed with play features, including 2 rotating turrets with spring-loaded shooters and 2 mini TIE fighters. The TIE fighters fit snug inside compartments on the slits of the ship. The bridge on the top of the ship doubles as a handle to let you manoeuvre through the air as easily as you might in the depths of space. Finally, the front of the ship lifts up to expose the cabin within. The cabin has a hologram table and doubles as storage for your accessories. Other accessories include The Mandalorian’s Ambran phase-pulse blaster, a spear, Moff Gideon’s Darksaber, 2 thermal detonators, and electro binoculars.

The ship first appeared in The Mandalorian Season 2, “Chapter 12: The Siege”. 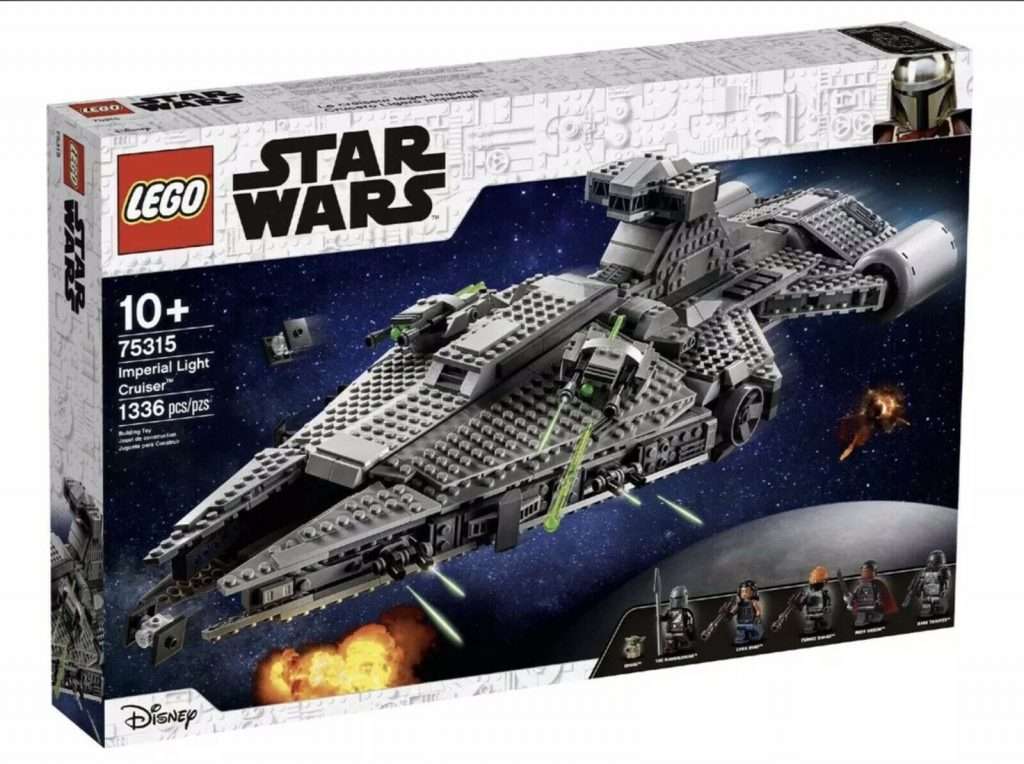 This is the Way. Bring yourself back to the place where the Mandalorian armour and weapons are made. The Armorer served the Tribe and at one point the Armorer created The Mandalorian’s own armour with the Beskar that he brought her. This LEGO set recreates her forge so that you too can recreate those moments.

For a small set, this setting is packed with details, from the Mudhorn logo over the entrance, to the flames in the forge itself. The Set includes three minifigures, including The Armourer, The Mandalorian, and Paz Vizsla. All three minifigures are new for September 2021. The forge itself is detachable and has a rotating exhaust hood and melting pot. The storage cabinet can hold on to your spare accessories, including the three Beskar bars. The completed build also has tonnes of tiny visual details, such as the buttons and switches of the machinery, and a Holocron.

The set makes a memorable display piece and play set. Melt down Beskar bars in the pot, or break up a fight between The Mandalorian and Paz Vizsla. 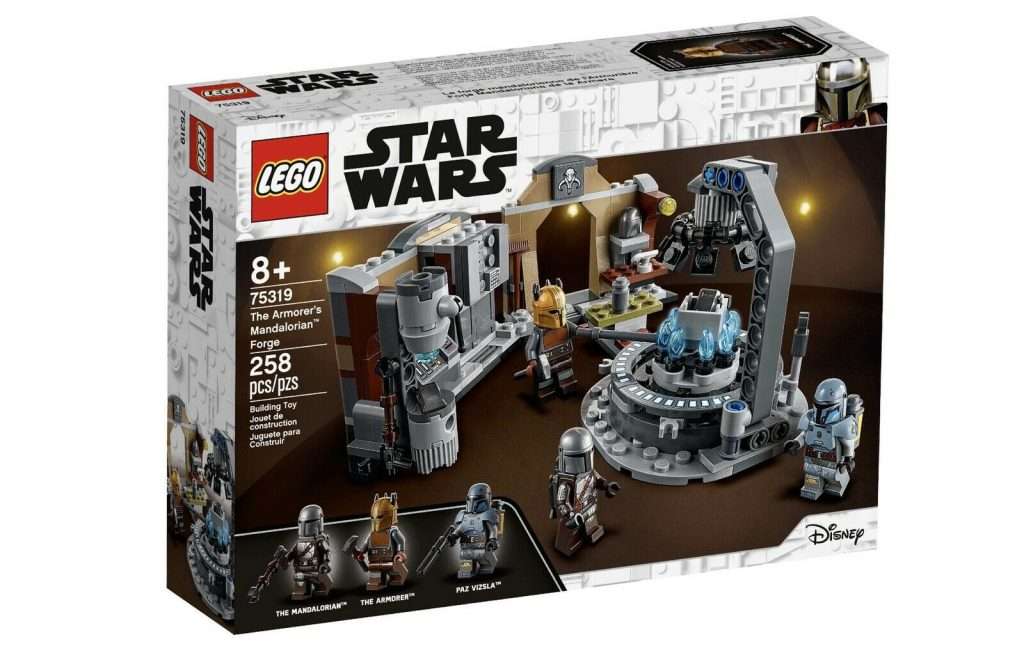 These LEGO Star Wars sets are all given a lot of love and attention to detail, all to create the best experiences for all who own them. With more The Mandalorian LEGO sets on the way, these 6 are bound to help you wait for new ones. We hope you enjoyed this list!