In January 2015 the new Marvel line of Star Wars comics burst on to the scene with Issue #1 having over 70 variant covers by various artists. The talented artist John Tyler Christopher chose to create an action figure variant cover in the style of the vintage Star Wars figures from 1977.  JTC perfectly captures Luke Skywalker (farm boy outfit) from Episode IV – A New Hope. Both the artwork for the card back; which has a more realistic feel and the figure itself are stunningly accurate. Even the bubble that the figure sits in looks realistic. So accurate are these covers that sellers on eBay have had to remind potential buyers that the auction is for a comic book and not a actual action figure. 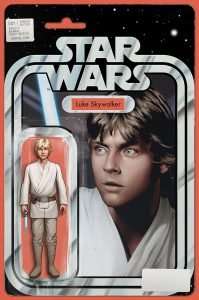 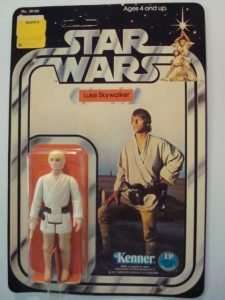 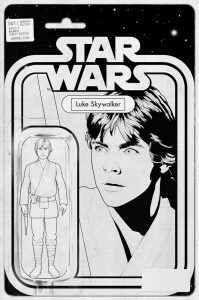 I am sure that John Tyler Christopher could not of expected the impact and popularity that these covers have had. People like myself are transported back to their childhoods in a wave of nostalgia. Every time a new edition is released it stokes memories of Christmas or a birthday where I was lucky enough to get a Luke Skywalker action figure for real. Over the years many more figures and vehicles from the Star Wars universe were acquired, whether that be from my generous family at Christmas or from saving my pocket money to buy them myself.

Fast forward 40 years, and luckily for us the nostalgia keeps on giving, with the action figure variant covers being readily available. John Tyler Christopher continues the theme to this day, with many of our beloved characters having been featured. They really are a must for any Star Wars fan or comic collector!

Make sure you have them all with my handy action figure variant checklist.