I haven’t got a huge amount to say about this cover. Not because i don’t like it or appreciate the art work, but because the character in general was always quite an underwhelming figure. At the time he was known as a bit of a peg warmer. The Bespin Security Guard was one of the Star Wars figures that didn’t really do a lot in the films and wouldn’t be the first figure you would look in your toy box for a game of ‘Goodies vs Baddies’. It’s weird because at the time all of my friends had at least one in their figure collection!

Anyway, down to the cover. I gotta be honest and say that like the figure the cover isn’t one of my favorites, but if we are to get the whole collection then he had to come sooner or later! The figure itself is spot on, the art on the card I’m not so sure. I remember the figure being a mustache sporting far east kinda guy but with the card art featuring a guy with a beard. So I’m not sure why the artist John Tyler Christopher went for a slightly overweight dude. Maybe there is a story behind it, maybe because the figure itself was on the quirky side that the art had to match that quirkiness. What do you think? let me know in the comments… 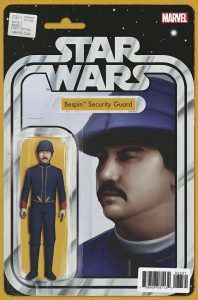 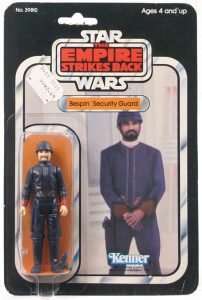 Are you collecting these fantastic covers? Check to see if you have them all with this complete checklist.