Not many creatures are known for being able to rip people’s arms out of their sockets when they lose a game. But Star Wars fans know the incredible Wookiees can do just that.

First introduced with the character Chewbacca, these tall, furry creatures are known throughout the galaxy. Although Chewbacca is known for his loyalty, friendship, and piloting skills, not all Wookiees are. 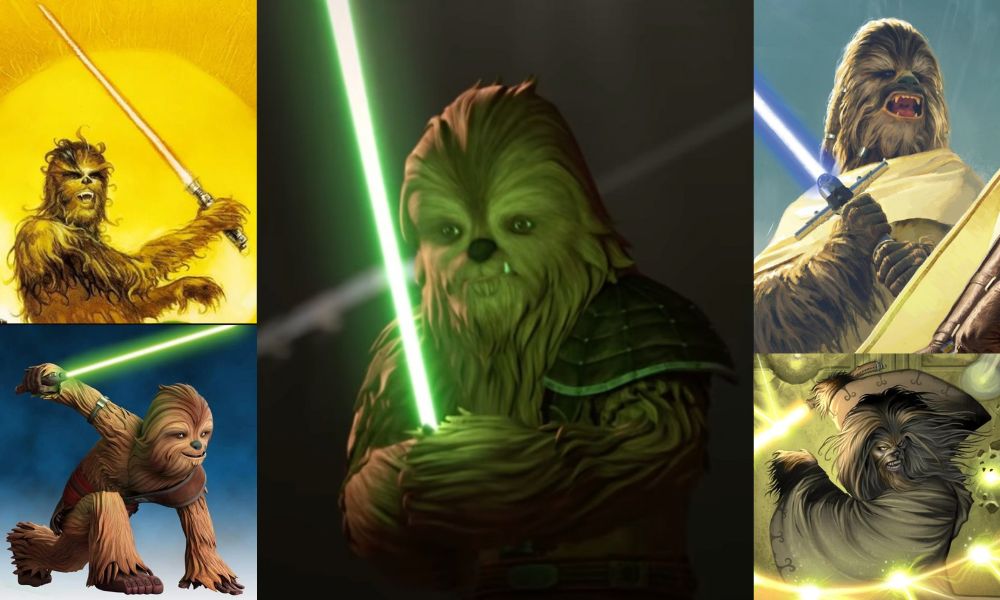 Surprisingly, this strong species has very few that are Force-sensitive. They tend to lean towards a short temper as well which is not a Jedi trait as they need to control their emotions.

Some Wookiees though were Force-sensitive and belonged to the Jedi Order. These Jedi Wookiees wielded custom lightsabers with unique hilts. These lightsabers often differed in color from the typical Jedi ones as well.

In this article, I will introduce you to each Wookiee Jedi in Star Wars. Additionally, I will discuss the different lightsaber colors and styles of each.

How Many Wookiee Jedi are There?

So far there are only six Wookiee Jedi known to exist in Canon and Legends. Only two are a part of Canon. One of the six was a part of Canon until The Force Awakens was created. He then became a part of Legends instead.

Although not seen in any of the Original Episodes, one Wookiee Jedi is seen in The Clone Wars. The others are found throughout Star Wars books, comics, and video games.

There are only two Jedi Wookiees in Star Wars Canon. The first, Gungi, is introduced in Season Five of The Clone Wars. Here he is seen as a Youngling. Gungi joins other Younglings with Padawan Ahsoka and Yoda to Illum. There each Youngling was bonded with their Kyber crystals. 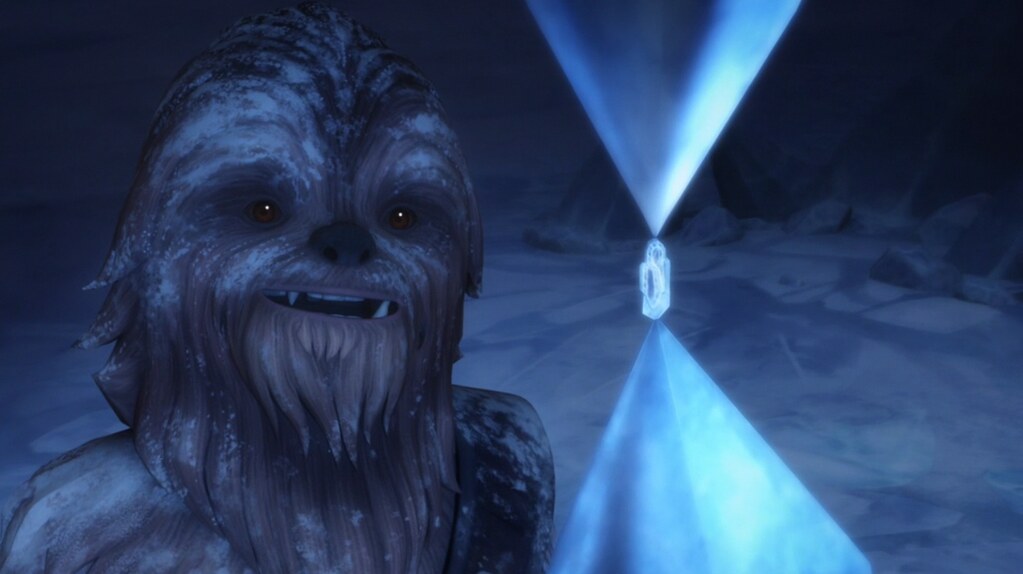 Gungi shows incredible patience while searching for his Kyber crystal. He finds his located across some water. He has the insight to wait for the water to freeze over so he can walk over it to retrieve the krystal. Master Yoda later commends him for his patience.

After the retrieval of his krystal, Gungi then creates a lightsaber with it. He chooses a unique design, incorporating Brylark, a strong type of wood. This wood is used for the hilt of his green saber.

Some notable foes he faced even before he became a Padawan were Hondo Ohnaka and General Grievous. Gungi assisted in the freeing of Ahsoka after she was captured by Hondo Ohnaka.

Shortly after freeing Ahsoka, Gungi, the Younglings, and Ohnaka had to work together. General Grievous had invaded Florum and captured Ohnaka’s crew. The Jedi and Ohnaka worked together to escape from Grevious and Florum. A teaser trailer that was aired earlier this year also hints at his reappearance in the next season of The Bad Batch. This reveals that he survived Order 66. We have yet to find out how he survives and for how long. 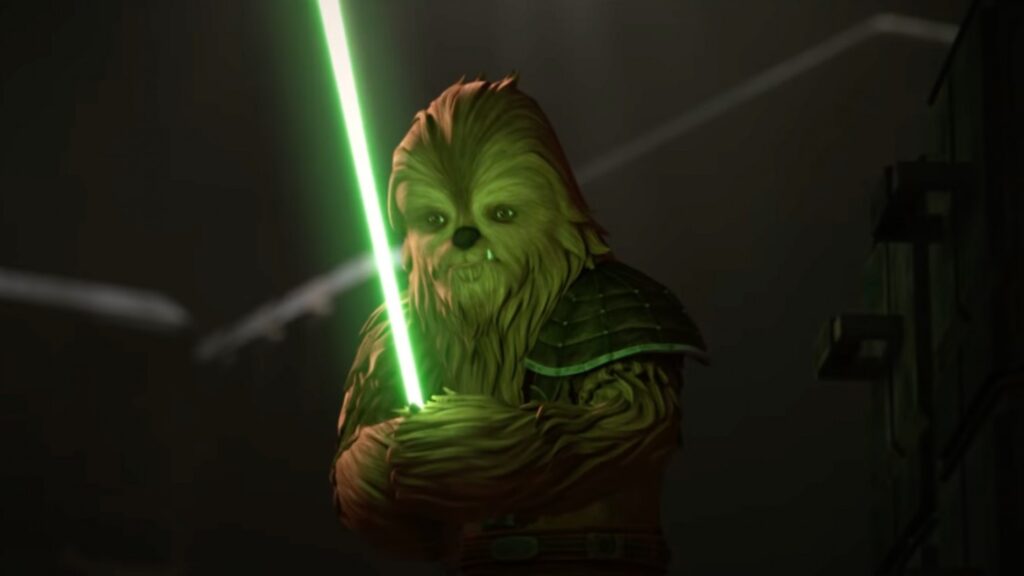 With a similar name to the beloved Chewbacca, Lowbacca was first seen in the novel Star Wars Young Jedi Knights: Heirs of the Force. He is the nephew of Chewbacca.

Once a part of Canon, he is now a part of Legends. He worked closely with Han and Leia’s twins Jacen and Jaina in his learning and adventures. Nicknamed Lowie, this Jedi trained with Luke in the Jedi Praxeum on Yavin 4 until he received the status of Jedi Knight through his capture of the leader of the Black Sun Crime Syndicate. He owned a translator droid as well designed by his Uncle Chewbacca. As the Wookiee language is so difficult to learn, M-TD was very helpful in his training.

Lowie was known for his mechanical skills. These skills proved useful in his lightsaber creation. With a unique blade color bronze, the hilt also was very unique.

He chose to create his blade out of salvaged parts taken from a Rebel control room located on Yavin 4.

As he is a large Wookiee, his lightsaber was larger than most Jedi’s as well.

Lowbacca was known for his combat skills and loyalty. He is also a quick thinker, using these skills often throughout the Young Jedi Knight Series. He often used his programming skills to help escape trouble.

Sadly, he had to eventually face his childhood friend and former classmate, Jacen during the Second Galactic Civil War. Jacen turned to the dark side of the Force becoming Darth Caedus. Lowie attempted to reach his friend but to no avail. Darth Caedus eventually died, but Lowbacca survived the war.

Kirlocca is introduced in the Tilnes Rising Game Campaign. Just like Lowbacca, he is a part of Legends. This Jedi Master taught lightsaber duelling techniques during the time of the Republic at the Almas Academy. In addition to his ability with the lightsaber, he was also very wise in the ways of the Force.

Since Kirlocca was so skilled in combat, especially that of Form 1, of course, he was known for owning a unique lightsaber as well. Although not much is known regarding his hilt, his blade was yellow. Kirlocca died on the ship Legacy of the planet Cularin. His death happened during a conference that was being held discussing Jedi Order practices.

There he battled T’salaks (Force-sensitive blob creatures) released by a dark Jedi Muun, attempting to defend some delegates from these creatures. Unfortunately, one of the Padawans who was assisting him in this battle became enraged due to the T’salaks and stabbed him.

He was sorely missed after his death. An extended celebration of his life was held on the planet by Jedi and citizens alike. His death also left a gaping hole in his position as lightsaber master.

Tyvokka was first shown in Star Wars Comics. Yet another that was found in Legends, he was a part of the Jedi Council. He was one of the members that served until his death.

His lightsaber blade was yellow, just like Kirlocca’s. Like Gungi he also chose to use wood for his hilt. The wood he chose was different. He chose Wroshr which was native to Kashyyyk, the Wookiee homeland.

Unlike many Jedi, he did not go with the typical straight hilt design. Instead, his was curved. His design was meant to follow that of the Wookiee bowcaster. Tyvokka trained Jedi Master Plo Koon. In addition to training this powerful Jedi, Tyvokka was known for his ability to sense the future. He used this ability to assist Valorum during the Stark Hyperspace War against Stark, various bounty hunters, and the Trade Federation.

Tyvokka was a unique Jedi in a variety of ways. He believed excess humility was as bad as excessive pride. Additionally, he was known for his short temper and blunt personality. He was one of the Jedi that stuck very tightly to Jedi ways as well.

Unfortunately, he was killed during the Stark Hyperspace War. Before his death, he courageously led the mission until his dying breath. His apprentice Plo Koon eventually took his spot on the Council after his death.

The least amount of information is known about the Wookiee Jedi Ruhr. He first appears in The Dawn of the Jedi Comics. He was trained on the planet Tython where he eventually became a Temple Master in the Je’daii Order. This position was the highest one in the old Order.

Ruhr was highly Force-sensitive. However, that is all known of him, as we do not even know anything about his combat skills or lightsaber. 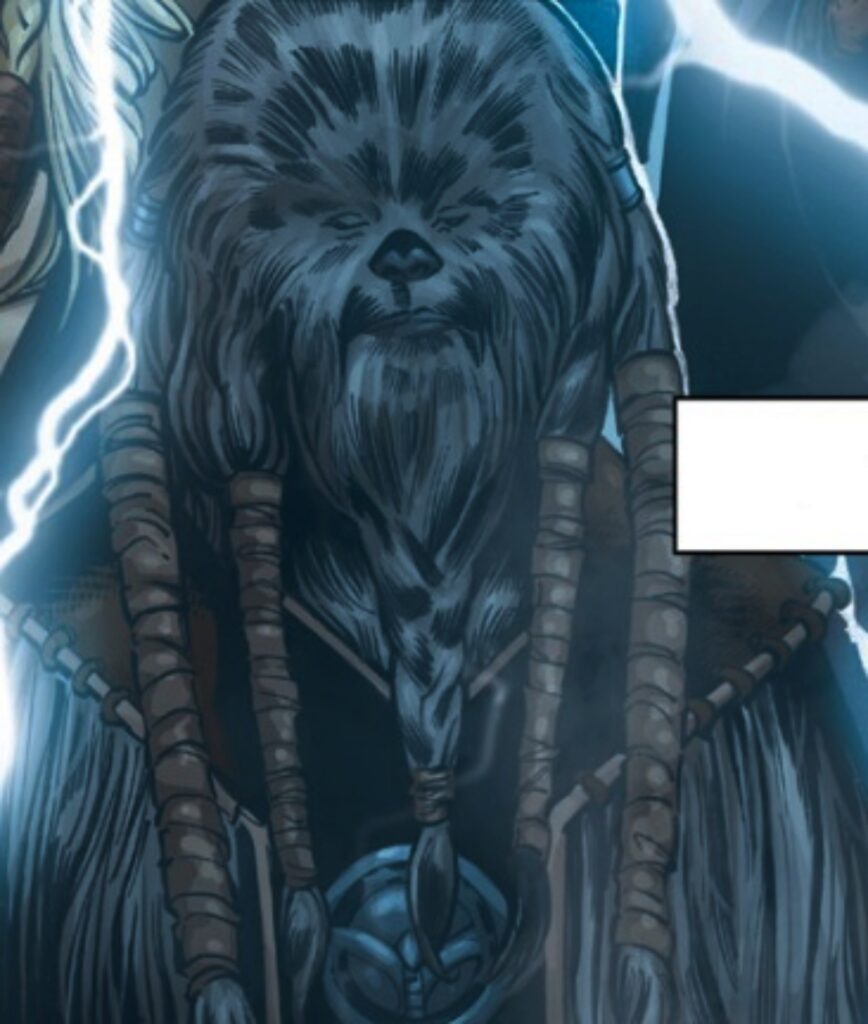 Burryaga is a part of the book series, The High Republic. He was trained under Jedi Master Nib Assek. Burryaga’s lightsaber was a typical Jedi blue.

Despite his plain blade color, his hilt was very special. It was a metal cross-guard that had no blades coming from either side. The cross-guard design was inspired by Excalibur, the legendary sword of King Arthur. Agaburry is well-known for his deep connection to the Force. During the Great Hyperspace Disaster, he felt the terror of people still alive on starship fragments that were floating through space. His discovery led to the saving of many lives.

Due to his language being one that not many spoke, he wasn’t a fan of large crowds and gatherings. He was known as a quiet, sensitive Jedi. His Master had the kindness and insight to learn Shyriiwook so she could communicate with him. From Legends to Canon, each Jedi Wookiee has a special place. Although only one is seen on the shows, the others make a mark in books, games, and comics.

Despite there being very few Wookiee Jedi in the Star Wars Universe, they each take a special hold on our hearts. Known for their intense loyalty, sometimes short tempers, and unique lightsabers, each are also special in their own way.

Although many only exist in Legends, it has been exciting to see a few of their stories expand in Canon. I am excited to see Gungi’s story continue in the next season of the Bad Batch as we continue to dive into the mystery of the Wookiee Jedis.