So many Jedi are known for their force sensitivity, strength in battle, wisdom, and power. Fan favorites such as Obi-Wan, Luke, Anakin, and Yoda abound in Star Wars. However, often forgotten and pushed aside is the Jedi known more for their peaceful ways. One such Jedi is the beloved Yaddle.

Yaddle is most well-known for being of the same species as Yoda and for her place on the Jedi Council. If you look deeper into her past and character, you discover a Jedi with deep devotion and patience. 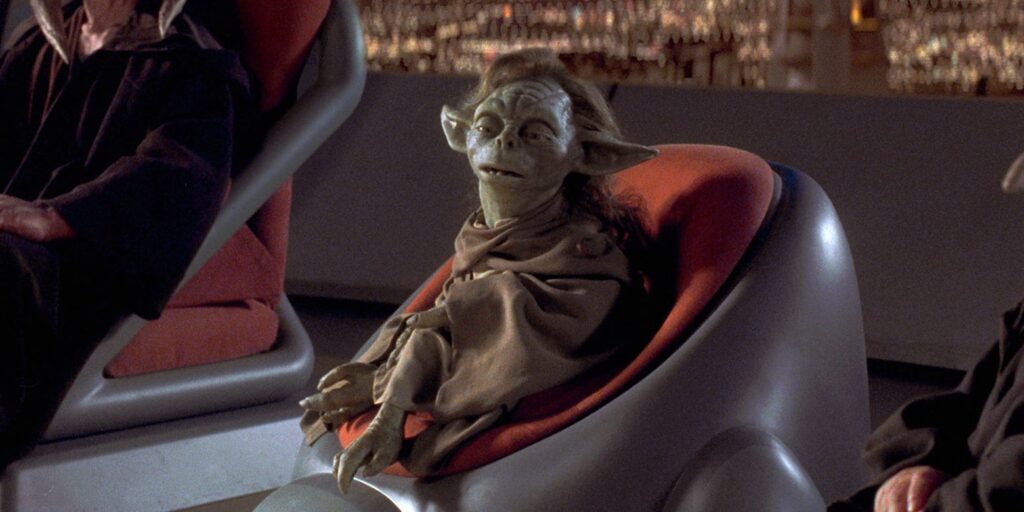 She is first seen in The Phantom Menace as a part of the Jedi Council. More recently she has been seen in Tales of the Jedi. In each of these, she demonstrates wisdom and gentleness.

In this article, we will discuss Yaddle’s species, character, movie appearances, famous face-offs, and unique history. 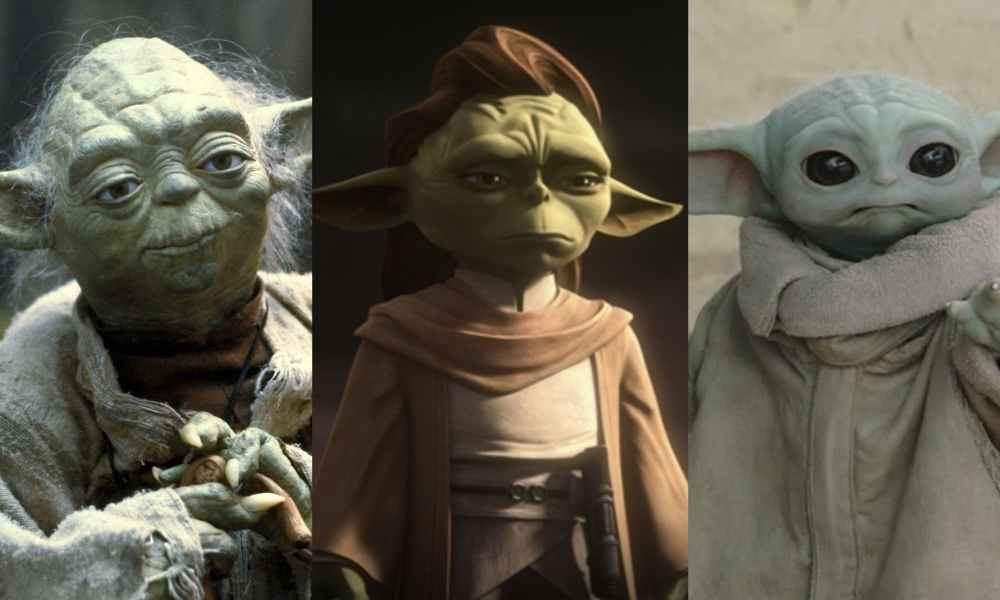 Yaddle hails from the same species as many fans’ favorite little green characters–Yoda and Grogu. She is the only female we have seen of this species in Star Wars.

Although her species’ origin and name are unknown, we do know a little bit of information about them. Every character hailing from this species is extremely Force-sensitive. In addition to their Force-sensitivity, they are small, wrinkly, and green.

Each of these members of the unique species lives for several centuries. Due to their long-life span, they can gain great knowledge in a variety of capacities. This leads to them often being known for their great wisdom. Although similar to Yoda in character, Yaddle has some other character traits that make her unique. She was one of the few Jedi known for her quiet demeanor. In addition to being quieter, she was also kind and patient.

These traits served her very well when training another Jedi. They led to her being a wise teacher. They were also helpful during her time on the Council while she was serving other members of the Jedi Order.

Additionally, she was very caring and forgiving. When Dooku fought against her, she still held out hope and gave him another chance. She was also willing to listen and hear his concerns and worries after Qui-Gon’s death, while the rest of the Council was not as willing.

Although Yaddle is very old in her appearances in Star Wars, she was discovered by the Jedi when she was very young. As a child, she was extremely Force-sensitive. Her Force-sensitivity led to her being discovered and brought to Coruscant to be trained in the Jedi Temple.

Once she went through the training as an Initiate and Youngling, she then became a Padawan. Polvin Kut became her master, training her in the ways of the Force and lightsaber combat.

After completing her training under Kut’s tutelage, she then became a Jedi Knight. As a Jedi Knight, she trained her own Jedi Padawans. Two of her most famous Padawans were Oppo Rancisis and Empatojayos Brand.

Oppo Rancisis eventually became a Jedi Master as well. He became a part of the Jedi Council, just like Yaddle. Empatojayos Brand was the last apprentice that Yaddle decided to take on.

When she wasn’t training Padawans, Yaddle loved to work with the Younglings and Initiates. She was patient and kind with each of them, teaching them most often about the Force.

Although Yaddle loved training, teaching, and learning, she also fought in battles. When she fought, she fought bravely to keep the peace and protect others. She used styles three and four most often. Yaddle was renowned for being one of the most skilled duellists in the Jedi Order.

Later in life, she became a member of the High Jedi Council. Her servitude was only for a short time. It began before the Invasion of Naboo and ended shortly after when she decided to step down.

As a member of the High Jedi Council, Yaddle received the rank of Jedi Master. She earned this title through training multiple Padawans to Knighthood, her duelling skill, and her deep knowledge of the Force. You can learn more about Jedi Ranks.

Before becoming a Jedi Master, she often was found in the Jedi Archives. There she grew in her knowledge of the Force and entertained her love of learning. The Star Wars Universe not only exists in a variety of games, tv shows, and movies but also in books. In The High Republic series, Yaddle is a teacher at the Jedi Temple.

She works with a variety of Younglings and Jedi Initiates, training them in the ways of the Force. Her talents of patience and kindness proved very helpful in mentoring each of these young Jedi she worked with, helping them to learn what they needed to continue on the path.

As we know, Yaddle was very calm and serene. This made her the perfect candidate to work with the Younglings. Her time training them was what she enjoyed doing the most as a Jedi Master. She hoped to be able to work with them more when she stepped down from the Council.

In The Phantom Menace, we see later on in Yaddle’s life. After working with Younglings and Initiates, she was elected a member of the Jedi Council.

Like Yoda, she was a wise council member who was very knowledgeable in the ways of the Force. Similar to Mace Windu, she also highly revered the ancient traditions of the Jedi and was skilled in lightsaber combat. Her ability to listen and understand others often proved helpful during her time as a council member as well.

Yaddle is seen listening when Obi-Wan and Qui-Gon inform the council of their encounter with Darth Maul. Additionally, later on, when Anakin was brought in for testing, she sat and watched.

We know from her short appearance in The Phantom Menace, as well as her appearance in Tales of the Jedi, that her sojourn on the council was not a long one.

Eventually, she decided to step down. Once she made that choice, Shaak Ti took her place on the Council.

Tales of the Jedi

Yaddle’s true moment to shine came in the most recent installment of Tales of the Jedi. For years, many fans wondered why she chose to step down from the Council. They wondered what exactly became of her during the Clone Wars.

These episodes go into more detail, shining the light on what became of beloved Yaddle. The episodes began right after Qui-Gon had been killed by Darth Maul. Dooku, Qui-Gon’s former master had come before the Council stating his death had been unnecessary. Although the Council did not agree with much of what Dooku had to say, Yaddle saw some truth in his concerns.

Her criticality of the Council led to her resigning from her position. With that decision, she hoped she would better be able to help Jedi in the Order, as well as return to her love–training of the Initiates and Younglings.

She suspected further troubles going on with Dooku after her leave from the Council. Her suspicions led to her decision to follow him one day.

Unfortunately, with this decision came her demise. Yaddle discovered not only Dooku’s turn to the dark side but also the identity of the Sith Lord the Council was looking for.

With a great show of compassion, she told Dooku of her faith and trust in him. She informed him of her decision to leave the Council and her attempt to help him with his concerns. Dooku however chose to prove his loyalty to the Sith and killed Yaddle.

Surprisingly the only known face-off Yaddle is known for is hers against Dooku. She was much better known for her peacekeeping ways, avoiding combat and conflict whenever she could.

Despite not participating in combat much, she was still a skilled fighter. Just as with Yoda, her size mattered not. While duelling Dooku, she fought with great skill.

As the duel continued, she eventually was crushed underneath a frame. Her wisdom and strength in the Force proved helpful, as she was able to lift the heavy object off, falling out of the enclosure.

Sadly, her large expenditure on the Force was too much for her. It left her too exhausted to fight. After falling out, she was stabbed by Dooku.

Yaddle was a powerful Jedi. Her great wisdom helped with training many Jedi. Her deep devotion to the safety, learning, and training of others led to the respect of the entire Jedi Order.

Yaddle truly demonstrated the ways a Jedi can still be powerful and influential without being combative and outgoing. Her great wisdom and kindness influenced many Jedi’s lives for good.

Even though she lived a long life, much of what happened during it is still unknown. I’m excited to see what the Star Wars franchise gives us in the future about more of her past!