The Mandalorian Series introduced every child and adult’s new favorite addition to the Star Wars Universe: Baby Yoda. Although shrouded in mystery, this young, green creature captured not only Din Djarin’s heart but also the worlds. But, how old is Baby Yoda? The Child, as the Mandalorian affectionately calls him, continues to search for answers regarding his past, as do we. His life, past, history, and future contain many unanswered questions. Despite the unknown, there are still some that we can answer!

In this article, you will discover how old Grogu is, what we know about his species, and much more!

How Old is Grogu?

From the first season of The Mandalorian, we learn Grogu is 50 years old. He was born in 41 BBY. His age is confusing to some as he is continuously called The Child. How can a child be 50 years old? His age makes more sense when you know more about his specific species.

His species name, although unknown, is the same as Yoda’s. We know that Yoda reaches the age of 900 before he dies, thus making the species very long-living. Yoda also mentions in The Empire Strikes Back that he has trained Jedi for over 800 years.

This clue indicates that he was old and mature enough to train other Jedi by at least the age of 100. Based on this clue, we can assume that Grogu will reach maturity around the age of 100. 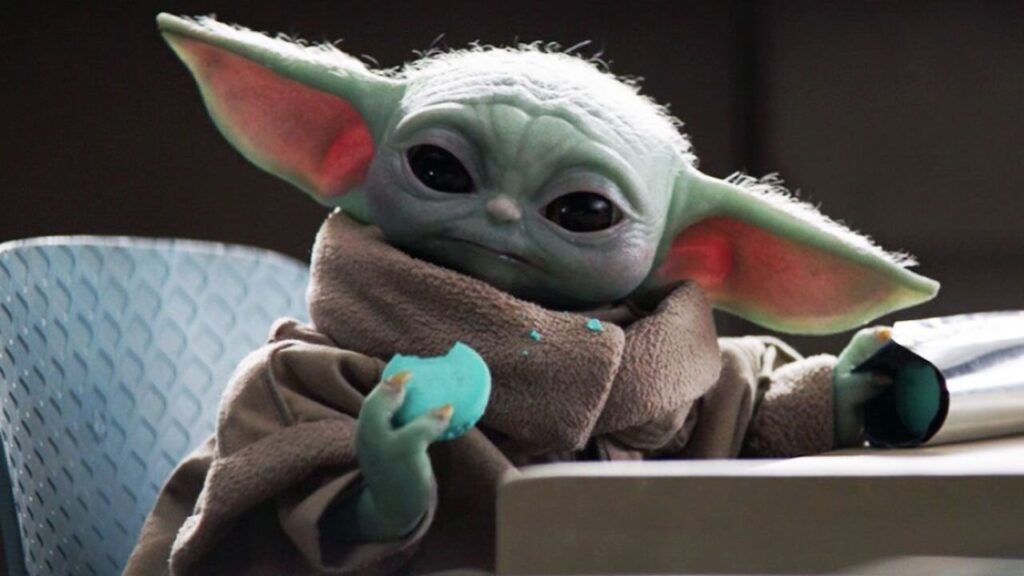 The reason Grogu got the nickname Baby Yoda from many fans is his resemblance to Yoda. He looks like a miniature of him. Not only do they share looks, but also other characteristics as well.

Grogu wields the Force with uncanny ability. Master Yoda is known throughout Canon for his extensive knowledge of the Force. They both share incredible Force abilities as well. 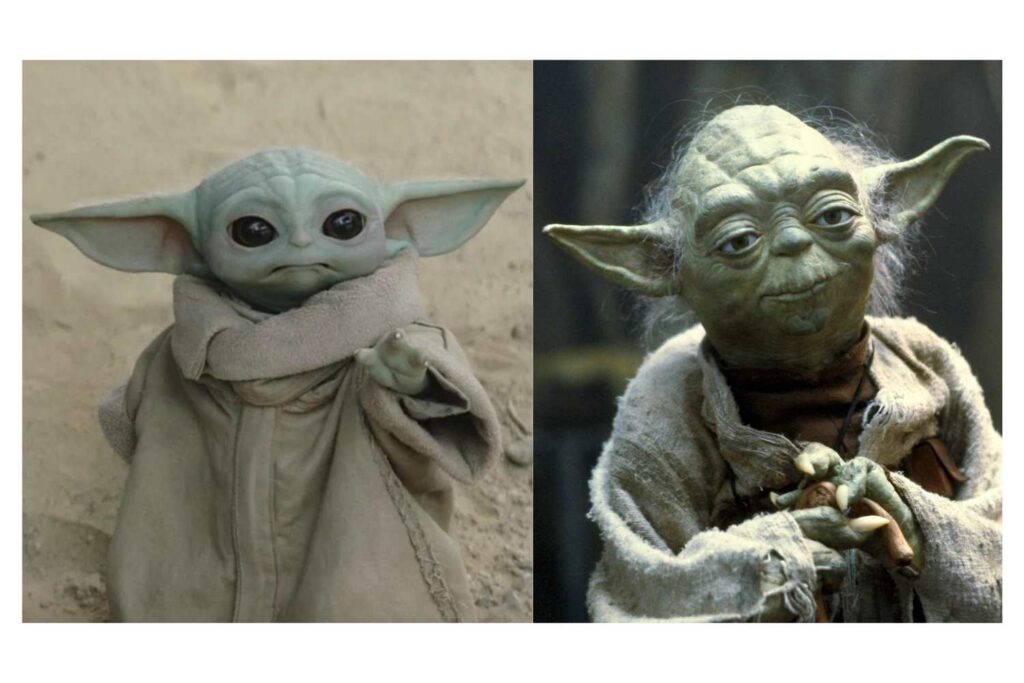 Yoda lives to be 900 years old. We know in the Prequels, he is in his 800’s. Yaddle, the only female Jedi we know of the same species is in her 400s. Thus, we know that their species lives for hundreds of years.

With the longevity of their lives, it makes much more sense to Baby Yoda’s age and maturity. As he is 50, he is still a baby.

Little more is known of his species. We know of their long lives and looks. Each is a small, green, intelligent creature with a strong connection to and control of the Force.

As for their speech, we have more recently learned from Tales of the Jedi that not all of their species use the same dialect as Yoda. Yaddle speaks the same as the majority of creatures, whereas Yoda speaks in the reverse style.

It will be interesting to see if Grogu takes after Yoda or Yaddle. Once he speaks, we will be given even more insight into the mysteries of the unknown species.

Flashbacks during The Book of Boba Fett provide some idea of where Grogu came from. While Luke is training him, they both can see part of his past.

During this scene, we see Grogu in the Jedi Temple. There he is hiding while Anakin and the 501st Clone Troopers are executing Order 66. Due to Grogu’s small size, he is seen hidden away while mass destruction occurs.

We still don’t know how he escaped, but this scene shows us he was at the Temple. This leads to further questions, as to how did he get there and who were his parents? 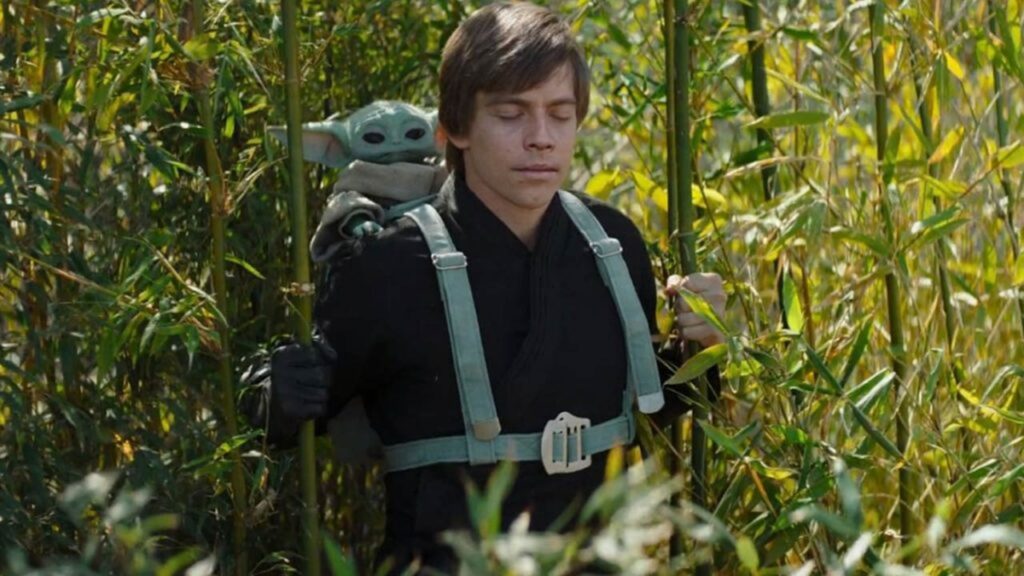 Are Grogu, Yaddle, and Yoda Related?

Grogu’s appearance in the Jedi Temple leads to speculation about his relation to Yoda and Yaddle. There are some fan theories that he is their son. Although relationships were forbidden, this could have occurred if their particular species was endangered to keep them alive.

Because Grogu’s birth coincides with the period both were on the Jedi Council, it is a possibility. Yaddle stepped down from the Council during this time as well.

Although, in Tales of the Jedi she steps down due to her disagreement with some rulings they make. Additionally, she wants to turn more to her work with the Younglings again, which some assume may have included Grogu.

Other theories assume that he came from their unknown home planet. On his planet, it was discovered that he was Force-sensitive. Due to his Force sensitivity, he was taken to train at the Jedi Temple. There has not yet been any confirmation of either theory’s accuracy.

We know little regarding Grogu’s life before going to the Temple or during his adjourn there. We do however know a little more about his current life. Due to his past training as a Padawan on Coruscant, he already has some knowledge of the Force and lightsaber combat.

We’ve seen him traveling the galaxy with Din Djarin on many an escapade. Additionally, he met Ahsoka Tano and briefly trained with her. When she told Mando that he needed to be trained by another Jedi, he was then taken to Tython to reach out in the Force to another Jedi. After being taken by Imperial Forces on that planet, eventually, he was rescued by Mando and Luke. He was then able to further his training under the dedicated care of Luke Skywalker.

He eventually decides to return to Mando instead of continuing his training with Master Skywalker. Grogu continues assisting Mando and others throughout the galaxy on their adventures.

Despite his small stature, Grogu holds the hearts of an entire fan base. Even though he only trained for a short time, he still maintains incredible control over the Force.

We still don’t know much regarding his past, family, or even his future. We do know, just like Yoda and Yaddle he should live a long life full of protecting creatures in the galaxy.

Although young by his species standards, at 50 Grogu has already affected many a life for good. I can’t wait to see what the future holds for our favorite little green Baby Yoda!