LEGO has made several Republic Gunships over the years, starting with their first set in 2002, and soon releasing their fourth set on August 1, 2021. The upcoming LEGO Star Wars Republic Gunship is the first of the sets to be included in the Ultimate Collection Series and as such has been completely redesigned to match the superior accuracy and quality that collectors expect from LEGO. The other three sets are designed for a younger audience, but they are still full of fun details that would make them exciting for any fan or collector. Every single set on this list has different play features, letting any collector find the set that is perfect for them.

The first Republic Gunship set was based on The Attack of the Clones and was released in the same year as the movie. This set had some very interesting features that didn’t appear in later editions of the Republic Gunship, and a surprising eight minifigures. The front of the ship is able to split open, allowing you to peer inside. It also includes a magnetic storage compartment inside.

Other features include turret pods on the sides of the ship that are able to swing out via a hinge and sliding rear doors. 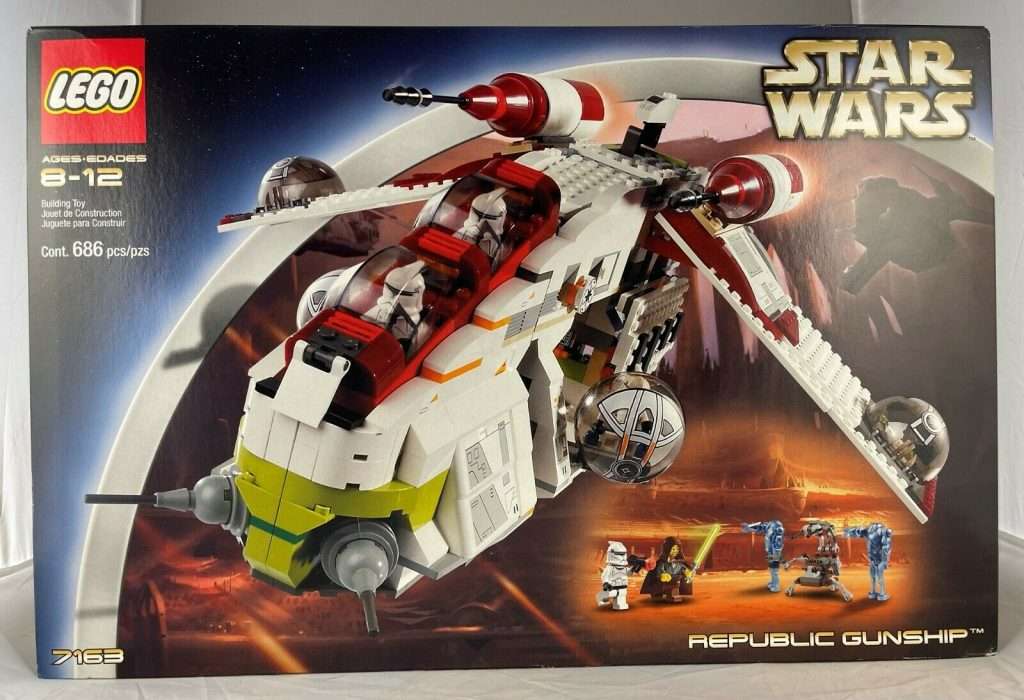 The second set on our list is the only Republic Gunship that was modelled after The Clone Wars television show. As such, the ship has faced a small redesign to better fit the show. This includes side and rear doors that are able to open and close and completely seal the ship for space, and a sticker set specific to The Clone Wars ship.

The ship itself contains several clever compartments. There is storage in the back that contains scout droids, such as those seen in The Phantom Menace, there is a medic pod near the front, a compartment for a command base, and a speeder that is stored in the cargo bay.

The missiles are flick-fire, and figures can be placed in the front cockpits as well as the turret pods on the sides and on the wings. This set also contains seven minifigures. 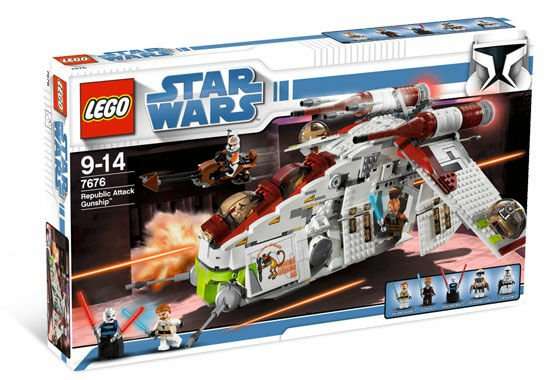 Returning to Republic Gunships that are based on The Attack of the Clones, the 2013 playset saw a massive overhaul in structure and stability of the ship over previous models. For one, the ship is much more sturdy and will not break easily in play. Second, this is the only ship that contains a handle on the top for ease of play. Simply hold it and your Republic Gunship gives the appearance of soaring through the galaxy. The handle itself is perfectly balanced with the rest of the ship.

The side attack pods have also been redesigned to offer more stability for when you place your Clone Troopers inside for the attack. Clone Troopers can also be placed inside the wing attack pods. The back gun has been improved to make it more stable, and the ship is equipped with flick-fire missiles. The side doors open and close easily and smoothly.

The front of the ship was redesigned slightly to contain a tunnel-like opening at the front and a storage compartment for extra flick-fire missiles. The playset comes with 7 minifigures, several that are exclusive to the set, including Padme Amidala. 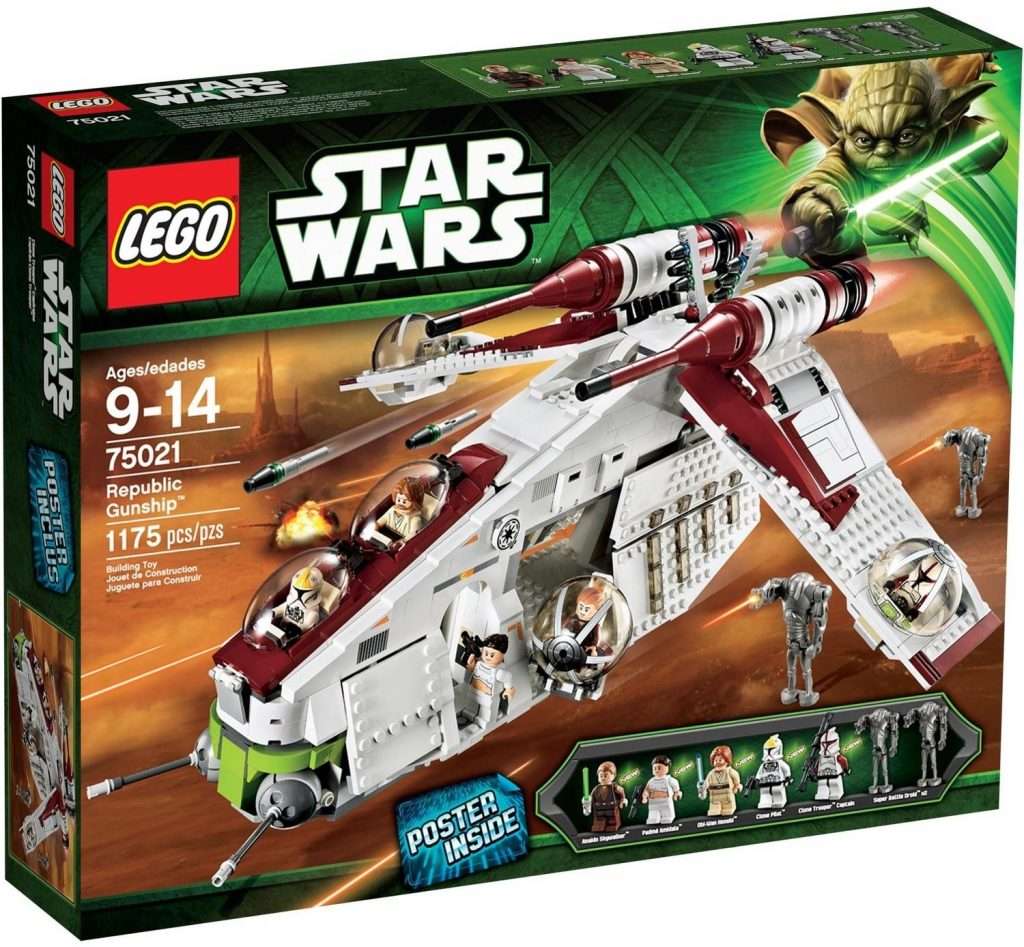 This up-and-coming Republic Gunship is a part of the Ultimate Collector Series. As such, the ship has been redesigned from the ground up to be the most accurate and has outstanding build quality. The ship is modelled after The Attack of the Clones and is by far the most realistic and accurate ship on this entire list.

The front turret pods have been redesigned with movie-accurate movement. The top-mounted turrets are now sunken into the top of the ship, rather than sitting on top exposed as with previous models. The turrets are also able to fully rotate from this position. The cockpit has printed pieces, as opposed to the sticker sets used in the previous models. The ship is also nearly twice the size of the previous three sets that came before it.

As this is a UCS edition ship, it comes with a display stand, and an information card for wherever you might show off your Republic Gunship. Unlike previous sets, this set only comes with two minifigures. That doesn’t matter as much since the scale of the ship was not designed with playability in mind and the minifigures are not meant to organically fit into the ship. This ship was designed with the intention to be a display piece and that becomes obvious when you take in its near-perfect details. 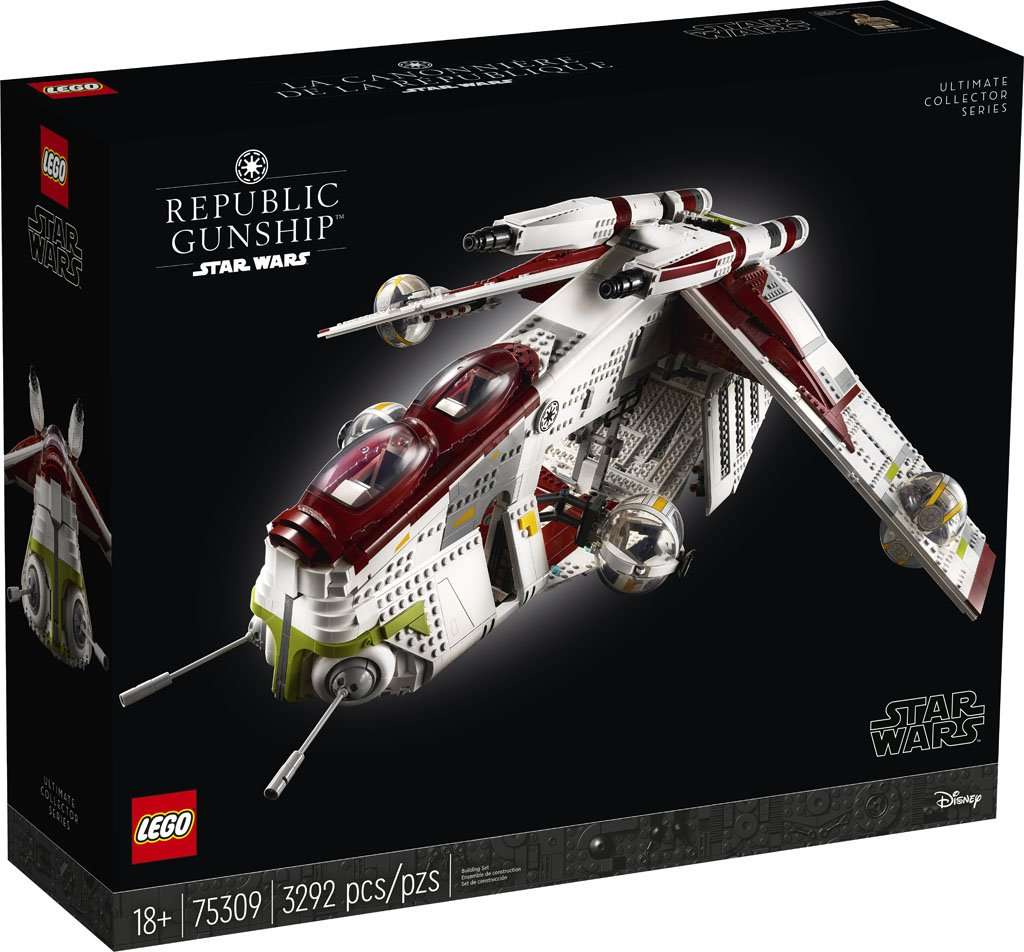 Which was your favourite Republic Gunship? We loved the playability and stability of the 2013 set, though we are looking forward to seeing the UCS edition. Let us know in the comments!