Few Starfighters in the Star Wars universe have such a long and iconic history. The Y-Wing was one of the most-used fighters by the Republic during the Clone Wars as well as the Rebellion during the reign of the Empire. Although the Y-Wing has not yet appeared in the sequel trilogy, we now know that it will make an appearance in  Star Wars Episode IX: The Rise of Skywalker but with a brand new look.

All in all, it is safe to say that the Y-Wing has been a fan-favorite starfighter since the beginning of the Star Wars franchise. Luckily for us, the fans, the ship has appeared in numerous LEGO Star Wars sets and was even made into a UCS set twice.

Today, we will go through all of the sets that include this iconic starfighter and see which one is the best LEGO Y-Wing set.

To begin with, we decided to combine the two oldest LEGO Star Wars Y-Wing sets simply because they are entirely identical. Set 7150 was one of the first sets to ever be released in the Star Wars Theme in 1999 while 7152 was a re-release of the original set in 2002.

Both sets have the same piece count, same design, and identical great minifigures. When you compare the prices today with the $49.99 for these two sets back in the day, this set was an absolute steal. You would get two of the most iconic ships together with some great minifigures. It was definitely a great playset for kids as well, as they could then create battles between the two sides.

Of course, the designs of the ships are a little basic which was normal for the time and cannot compete with the newer versions that are far more sleek, sturdy, and accurate. Nevertheless, both of these sets are highly-collectible nowadays and would definitely improve any collection. Unfortunately, you would have to pay a significantly higher price to own one. 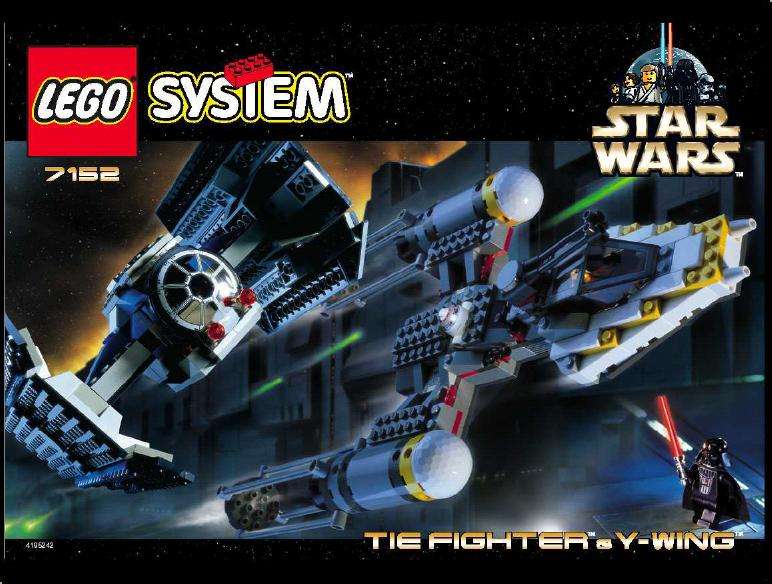 Curiously enough, in 2004, LEGO decided to make another re-release of the two sets that we discussed above. Was it because the two previous ones were a hit among fans we cannot say, but a second re-release in 5 years is really uncommon.

Nevertheless, both the LEGO Tie Fighter and the Y-Wing in this set had gone through some design changes. First off, the Tie Fighter was the newer more accurate version that was included in the Tie Fighter Collection set from the same year. This meant that if you cannot afford the expensive one, you could still get this ship from this collaboration set with a Y-Wing.

The only changes with the LEGO Y-Wing were the colors. The two previous versions of the set had the fighter in Grey and Dark Grey. This one, however, was made in the brand new Dark Stone Grey and Medium Stone Grey which was definitely an improvement.

Other than that, the builds were identical, the piece count was the same, and the minifigures were the same. Overall, this set did not impress people that already owned the previous versions but was a great opportunity for collectors that missed out first time around. 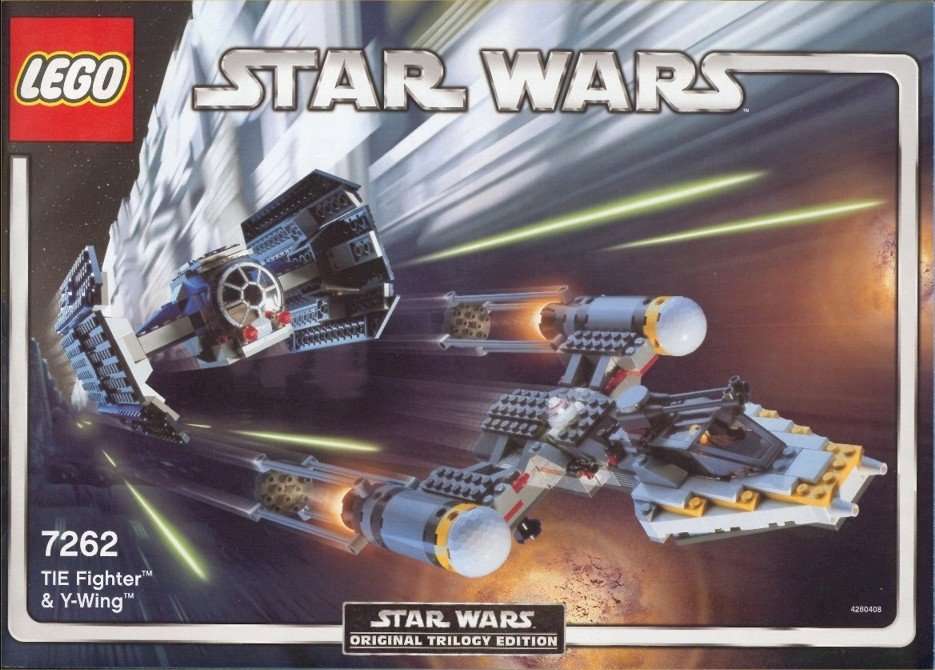 Obviously, 2004 was a great year for the Y-Wing Starfighter as LEGO Star Wars fans also received the first-ever UCS Y-Wing. Later on, we will discuss the re-release from 2018 which was significantly better. Nevertheless, the 2004 version was quite impressive back in the day.

It was one of the few sets at that time that had such an incredible amount of details. Besides that, it was priced extremely well and was totally worth it. On the other side of things, it was definitely out of proportion. It looked good but definitely could have been improved before the release.

Overall, if you want a large Y-Wing set, I would suggest that you get the newer one as it is far more advanced in every category. Nevertheless, this Y-Wing is a must-have for UCS collectors. 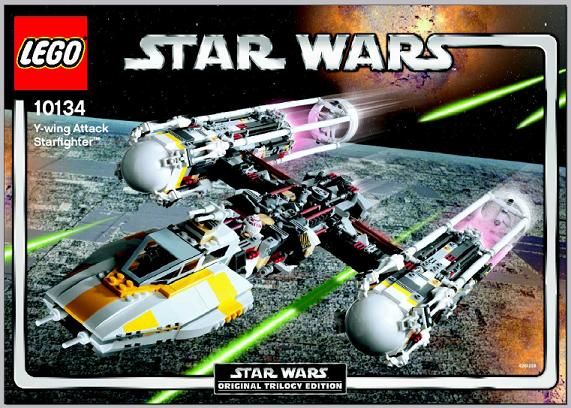 Three years passed before the LEGO Star Wars community got another Y-Wing and it was the first set to not have a Tie Fighter included. We can safely say that 7658 truly set the standards high when it comes to remakes of sets. This version had an entirely brand new design that surpassed its predecessors in every category.

For this re-release, LEGO did an outstanding job with the design – it is smooth but extremely detailed. The build itself is also not as easy as you would expect – you should be careful when constructing the engine as it is easy to get it wrong.

The only problem that LEGO faced with this set in terms of customer response was the price. In all honesty, sets at this price point usually have more minifigures. In terms of playability, there is not much to expect from a Starfighter set and this one will not surprise anyone. Nevertheless, the set did look amazing back in the day and was genuinely a must-have. 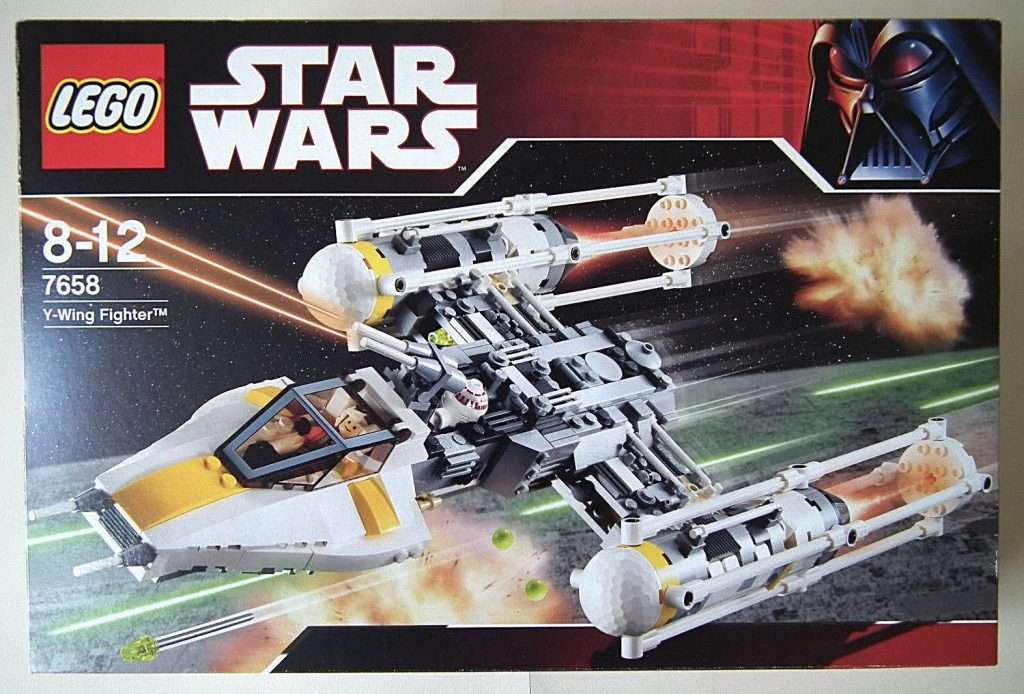 Set 8037 was the first Y-Wing we received from the Clone Wars era. Just from the box itself, you can see how different it is compared to any of the previous Y-Wing sets. Before anything else, this one was almost entirely yellow while the previous versions were predominantly grey with yellow lines and segments.

In addition, this Y-Wing was significantly larger and had a brand new section for a gunner. One thing was quite unusual – not every minifigure would fit in the cockpit. The set also included Ahsoka Tano and R2-D2. Compared to the previous Y-Wing Starfighters, this one had much more to offer in terms of playability.

One thing is certain – fans were disappointed by the minifigure selection. This set would have benefited from a clone gunner besides the other three characters. After all, the price point was rather high for a set with under 600 pieces.

In 2012, the LEGO Star Wars community finally received a brand new Y-Wing from the Rebellion era. When it was first announced, it did not receive enough appreciation which changed after the release. Fans were extremely happy with the set and it was well-deserved, to be honest.

The design of the ship is good but perhaps not as sleek as some of the previous models. It would have possibly be better if the Astromech could sit facing forward but that would have probably caused some problems with the overall build.

The unique thing about this set was the minifigure selection. All three of the figures here were exclusive and brand new for the time. Of course, the figure of Dutch Vander is nothing impressive as it is similar to the more common Zev Senesca. Nevertheless, it had better torso printing and a new helmet. The R5-F7 Astromech droid was a great figure overall and the first droid with yellow printing to be released. Nevertheless, it does not exactly fit the picture here as it is not really Dutch’s droid. It does look good nonetheless.

The Leia minifigure was brand new for the time and it depicts her with ceremonial clothing, most certainly addressing the final scenes of A New Hope. However, it does not really make any sense for Leia to be included in this exact set. Still, it does benefit for the slightly higher price of the set based on price per piece. 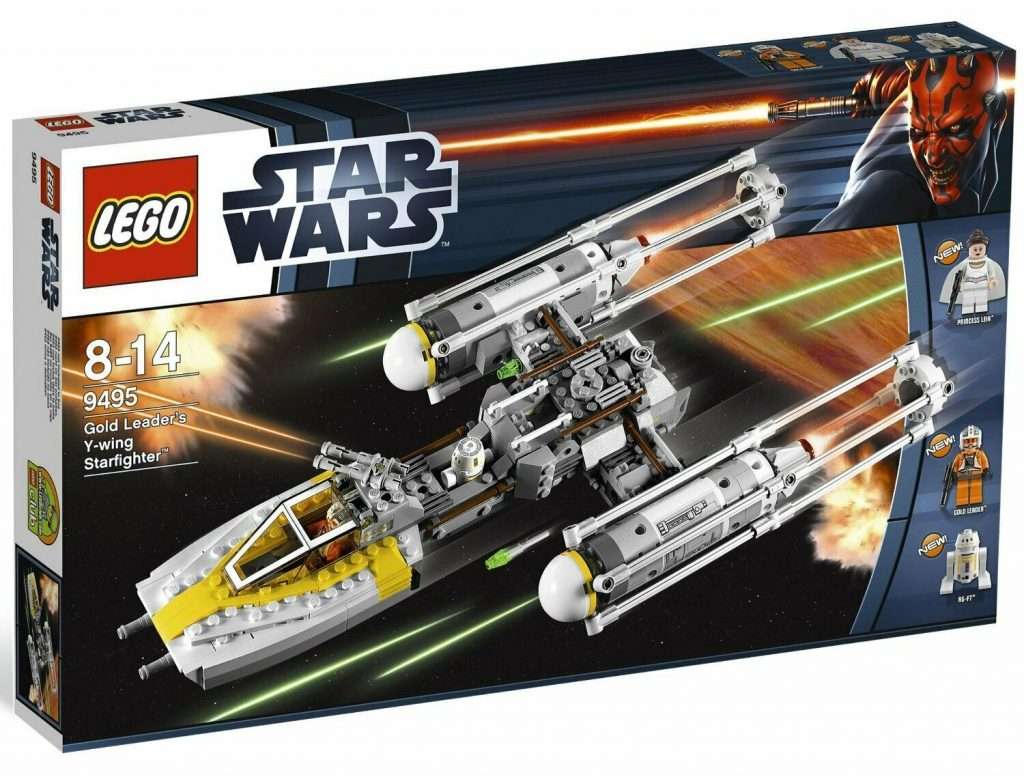 This particular Y-Wing set came out as a part of the Rogue One line of sets in 2017. With five years of time between this and the previous one, it was highly appreciated by the LEGO community.

Before anything else, the set presented an amazing minifigure selection with three exclusive characters from the movie – Moroff, Admiral Raddus, and a brand new Rebel Astromech Droid. None of these three minifigures can be found in any other set as of today.

Other than that, the ship itself is larger than any of the previous models (apart from the UCS version) and it is completely different in design. Fortunately, LEGO did not simply take an old re-release and change one or two things but created a brand new design. We can safely say that this Y-Wing was the most accurate representation of the ship in this scale until 2017.

Needless to say, the designers managed to catch a lot of key details of the real ship and implement them in a small toy. For this reason together with the incredibly generous and unique minifigure selection, the fans loved this set and we totally recommend it if you can find it. 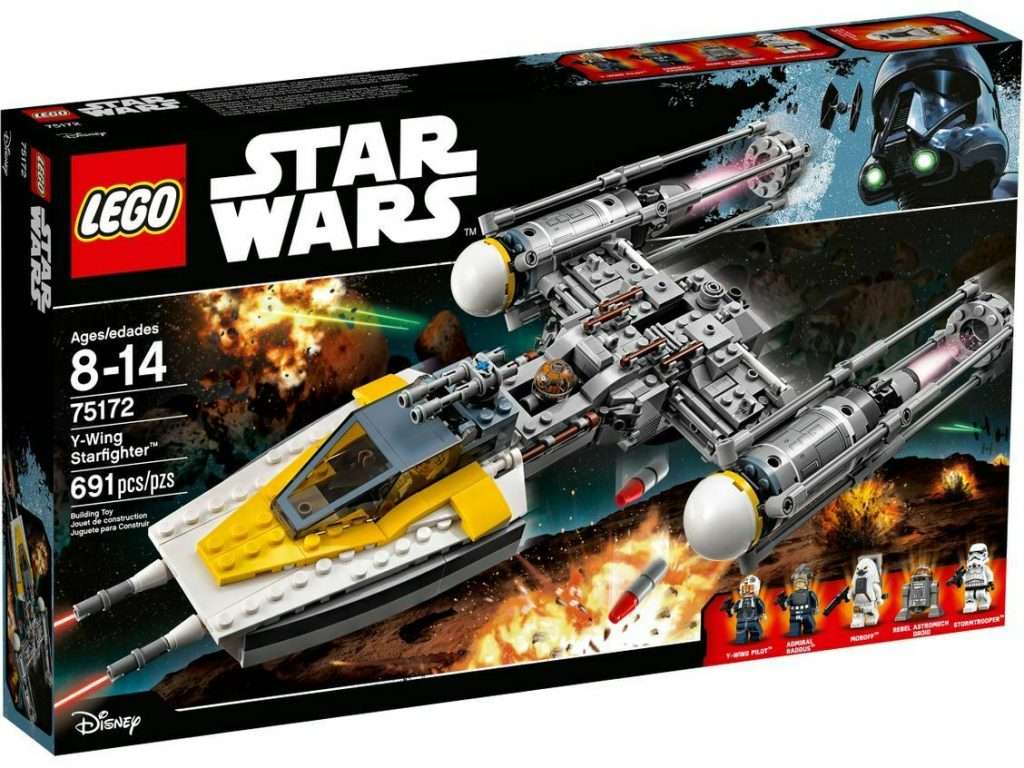 In 2018, we got an announcement that the 2004 UCS Y-Wing will be remade and re-released. Although this particular UCS set was not one of the more anticipated ones in recent years, the ship in the large box is definitely an incredible improvement from the original version.

Nevertheless, it would be pointless to compare two sets that have such a long gap of years between each other. LEGO sets today have nothing in common with the ones 15 years ago. This does not change the fact that the new UCS Y-Wing is an outstanding set and totally worth it both as a collectors’ item and for its price.

As any other UCS set apart from the Millennium Falcon and the Death Star, the Y-Wing does not offer a lot in terms of playability. Yes, you can carry it around as if it flies but nothing besides that. On the contrary, it is a brilliant display piece and it will become a focal point of any room you place it in. This is most certainly a great set for any adult LEGO collector.

As it seems, we will be seeing a lot of iconic ships from the Star Wars Universe in the new movie The Rise of Skywalker and the Y-Wing is definitely one of them. It does, however, look slightly different as it is not in the usual yellow and grey but painted in red and white.

The ship itself is quite large and has a brand new design besides the new color scheme. The build is quite satisfying and combines different interesting techniques. More notably, the minifigure selection is exclusive and presents some new characters as well as new variants of old ones.

Before anything else, we get a brand new Poe Dameron with new printing that fits the clothing we see in the trailers. We also get two brand new droids that will appear in the movie – one of them, D-0, apparently is an important character as we constantly see it in the trailers.

In addition, we get a Zorii Bliss minifigure who is a character that we know almost nothing about. It is a pretty unique figure that perfectly matches the promotional images for the movie. We can only wonder what her part in the movie will be.

Last but not least, the set also includes a First Order Snowtrooper which is quite curious. Star Wars has always used LEGO sets to give small clues about upcoming movies and the addition of aSnowtrooper suggests that we will see a battle including Y-Wings on a planet covered in snow. Quite possibly, we may see Hoth once again!

All in all, the Resistance Y-Wing Starfighter is an amazing set that deserves your attention. The only unfortunate detail is its high price but it does include some exclusive minifigures that may not appear anywhere else such as Zorii Bliss and the blue Astromech. 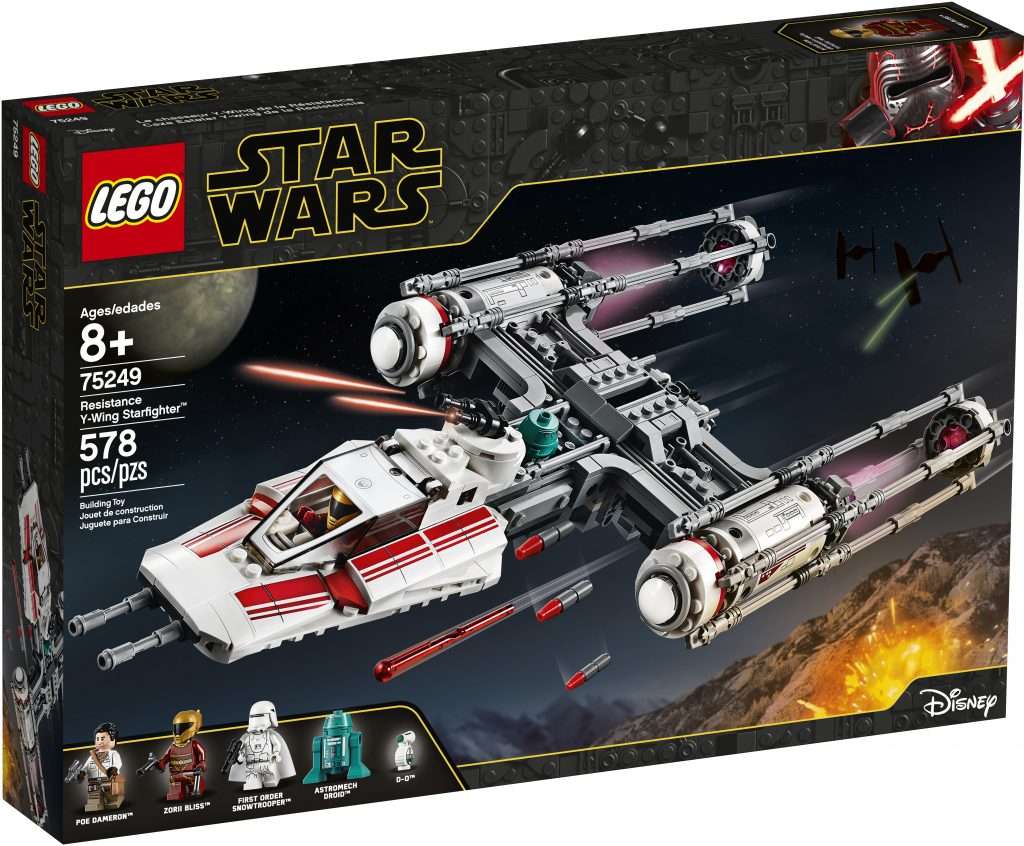 Ten LEGO Star Wars Y-Wing Starfighter sets in 20 years is definitely a lot despite the fact that the first ones were identical re-releases. This ship has received a lot of attention by LEGO and it clearly is a fan-favorite having that there were three different versions in the last three years.

If we had to choose one that stands above the rest, our choice would be the 2017 version – set 75172. It clearly stands out in terms of design, accuracy, and exclusiveness of the minifigure selection. Nevertheless, the older versions would be great in any collection and are also worth having.